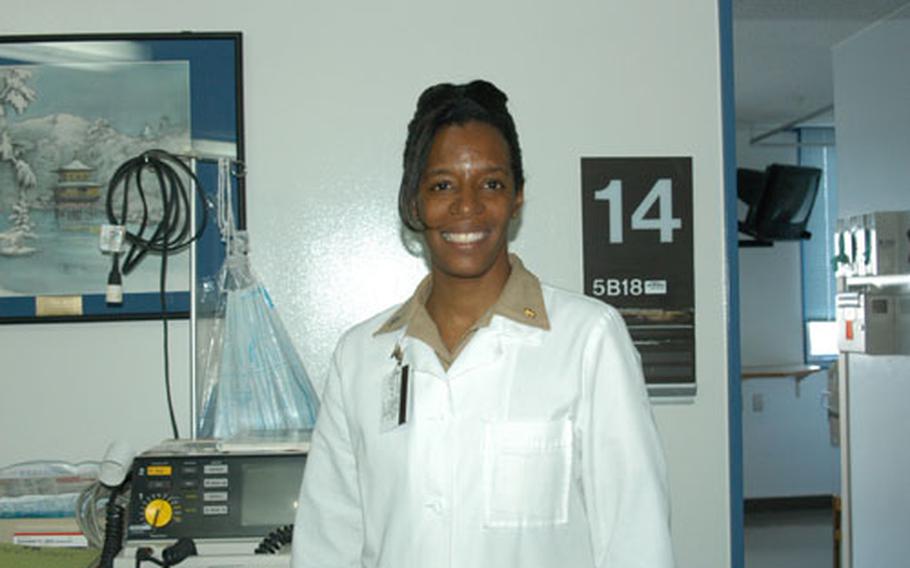 Lt. Shynell Bennett, a nurse at Yokosuka Naval Base Hospital, spent the spring of 2003 treating patients at a field hospital in Iraq, the first ever Naval hospital in a combat zone. It was an experience she said she didn&#39;t want to remember but will never forget. (Nancy Montgomery / S&S)

He was a little boy of about 3, around 40 pounds, and dying. No one knew what he looked like.

But Lt. Chuck Dickerson could.

The only nurse on duty with pediatric experience at the Navy&#8217;s first-ever combat hospital, Fleet Hospital 3 in southern Iraq, Dickerson looked at the small Iraqi boy brought in by U.S. Marines in the early days of the Iraq war, and thought how to save him.

Dickerson&#8217;s actions to save the boy, including devising an innovative drug cocktail, were recognized Wednesday at a surprise party at the hospital, where Dickerson learned he&#8217;d won a national nursing award sponsored by a nursing-uniform manufacturer.

The award, the Cherokee Inspired Comfort Award, was bestowed on nine U.S. nurses, from more than 1,600 who were nominated by colleagues, and includes an engraved stethoscope and a paid trip to the winners&#8217; 2005 medical conference of choice.

&#8220;They were real creative,&#8221; Bennett said of Dickerson and the doctors and respiratory therapist who cared for the boy for more than eight hours before he was flown by helicopter to a Kuwait pediatric hospital.

The hospital drew staff from naval hospitals in Pensacola, Fla., and Portsmouth, Va., among other places; places where most patients were sick or having surgery.

So no one was emotionally prepared for the trauma injuries &#8212; almost all of them suffered by Iraqis &#8212; that started coming through the doors.

&#8220;We were all eager, pumped and ready to go, and then, when the casualties started coming in, there was this moment of shock,&#8221; Bennett said. Bennett, who said she had refused to talk about her experiences in Iraq until this spring, recalled one woman whose jaw was blown off when her small son brought a hand-grenade into the house. The little boy was killed in the explosion.

At that point in the war, members of the 1st Marine Expeditionary Force, which the fleet hospital was supporting, came in most often for gastrointestinal illness, Bennett and Dickerson said, and occasional accidents.

The Iraqi patients, though, had shrapnel wounds and blast wounds and gunshot wounds. And some of them said they&#8217;d been shot, or their wives and children had been shot, by other Iraqis for refusing to fight for Saddam Hussein.

The little boy Dickerson helped save was one of those, the hospital staff was told. According to the story, men had barged into his home and tried to press his father to fight for the Iraqi army; they held a gun under the boy&#8217;s chin and fired it when the father did not cooperate.

The family had handed the gravely wounded boy over to the Marines for help, and he initially was treated by what Dickerson said must have been a highly skilled doctor in the field who managed to intubate the boy and attach him to a ventilator.

But the ventilators were not as sophisticated as those in the United States, Dickerson and Bennett said, and, along with the dust and often compromised lung condition of the Iraqi population, caused problems in patient care.

Dickerson saw that the boy&#8217;s condition was deteriorating because he wasn&#8217;t responding well to the ventilator, and, within minutes likely would suffer lung damage, then cardiac arrest. Looking at the small boy lying there, his head wrapped in saline-soaked gauze to help preserve the detached facial skin, Dickerson came up with a plan:

Dickerson, with a background in critical-care nursing and a knowledge of how both drugs and ventilators worked, suggested the boy be given a three-drug mixture to paralyze and sedate him and block his pain, all at once.

For eight hours, as they waited for a helicopter to take the boy, whose name Dickerson has forgotten, to the Kuwaiti hospital, Dickerson continued the meds, administered with a syringe because there was no tubing to hook up an intravenous drip.

And lastly, he made up a batch of the syringes, carefully labeled and made &#8220;doctor-proof,&#8221; for the doctor and respiratory therapist who accompanied the boy to the hospital. The Kuwaiti hospital would not allow the boy&#8217;s parents to accompany him, Dickerson said.

Dickerson was nominated for the Cherokee award by his former boss, Cmdr. Janet Hughen, who, both he and Bennett said, always was trying to recognize the good things her nurses did. She has since rotated out.

Bennett might have been nominated, too, for some of the heroic things she did at the fleet hospital, but, she said, she didn&#8217;t want to bring any of those memories to the front of her mind.