Nurse living proof of importance of screening for prostate cancer 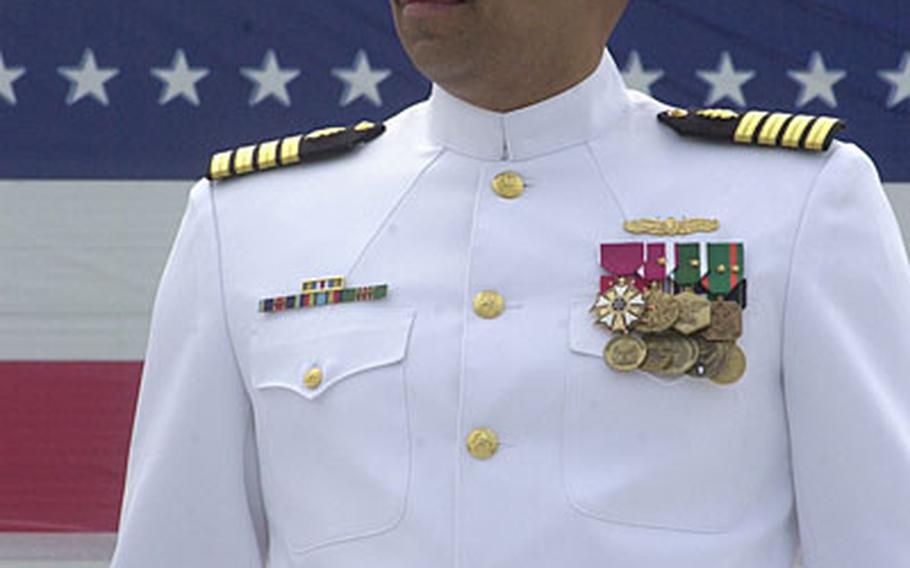 Capt. Brian S. Dawson, who took command of the U.S. Naval Hospital Okinawa in May, said that September as prostate cancer awareness month "is close to my heart.&#39; He was diagnosed with prostate cancer three years ago and talked about his experience this week. (Cindy Fisher / S&S)

CAMP LESTER, Okinawa &#8212; As a military nurse for more than 20 years, Capt. Brian S. Dawson knew the importance of periodic health screening tests, but still he treated his own health like a typical guy would.

But that is the wrong attitude to take as Dawson, 47, discovered when he was diagnosed with prostrate cancer about three years ago through a simple screening that he almost didn&#8217;t take.

In 2003, Dawson was a nurse at the National Naval Medical Center in Bethesda, Md. During September, Prostate Cancer Awareness Month, he learned some important facts.

Yes, he decided, he should probably take advantage of the screenings that the Bethesda hospital was offering.

Thanks to his head nurse, he finally took the prostate-specific antigen blood test.

He credits her with saving his life.

His blood test came back with elevated levels of PSA, an indication that he might have prostate cancer.

His next step was a physical exam, which turned out normal, he said. But after two biopsies, &#8220;it was determined that I did have (prostate) cancer.&#8221;

So in January 2004, at 44, he had his prostate removed. Today, his only reminder of the cancer is a six-inch scar from the surgery.

The prostate is an organ about the size of a walnut situated between a man&#8217;s urethra and bladder that contributes small amounts of fluid to semen. Surgery consists of cutting the prostate out and reconnecting the bladder and urethra.

Dawson said he is a proud three-year survivor of cancer who has learned his lesson.

He now takes advantage of screenings for everything from cholesterol and colon cancer to testicular cancer and high blood pressure.

Dawson admits that it&#8217;s usually his wife who reminds him when it&#8217;s time for a screening, and he urged other wives and girlfriends to remind their male loved ones to see their doctor when it is time to do so.

&#8220;No one has to die from any of these forms of cancer if they are vigilant in self exams and screenings at the appropriate ages,&#8221; he said.

Diagnosing the disease early is a key to treatment

CAMP LESTER, Okinawa &#8212; Other than skin cancers, prostate cancer is the most common cancer in men.

Some 218,890 U.S. men will be diagnosed with prostate cancer in 2007, according to the American Cancer Society.

With September being Prostate Cancer Awareness Month, now is the perfect time for men to learn about the disease and how to catch it early, said Lt. Cmdr. M. Adrian Rossi, a urologist at U.S. Naval Hospital Okinawa.

Prostate cancer is very amenable to treatment if it is detected early enough, Rossi stressed.

Men who are diagnosed with an early stage of prostate cancer have a 100 percent survival rate five years after treatment, according to the American Cancer Society.

The five-year survival for advanced prostate cancer &#8212; in which the cancer has spread to other areas of the body &#8212; is only about 32 percent, according to the society.

Fortunately, there are some very simple screening tests that can detect the cancer before there are symptoms, he said.

A blood test shows if there are elevated levels of prostate-specific antigen, which could be an indicator of prostate cancer. And a rectal exam can be performed to detect masses or suspicious lumps in the prostate.

Black men 40 and older, all men 50 and older and those with one or more risk factors should get annual screenings, Rossi said.

The trend in medicine today is toward prevention and early detection, said Brian Davis, hospital spokesman.

Some risk factors for prostate cancer: