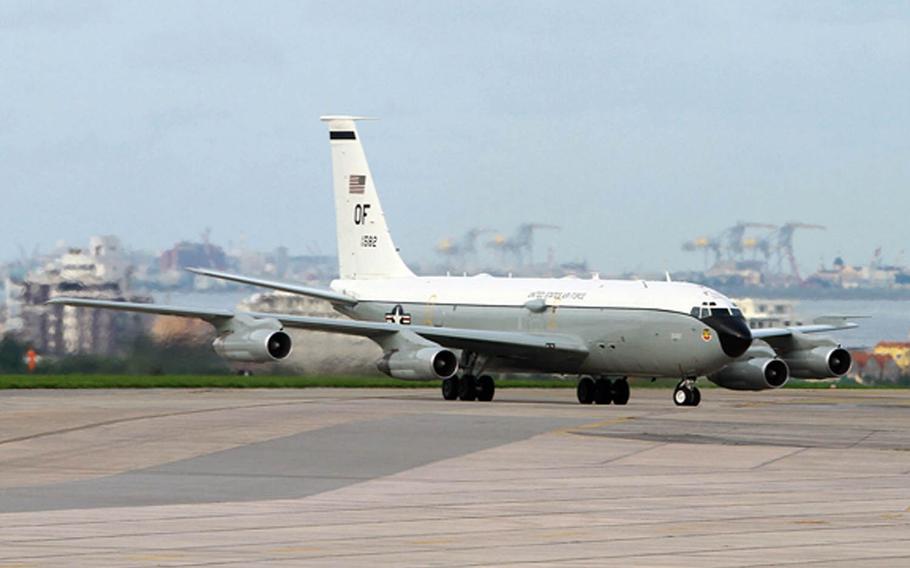 Buy Photo
An Air Force WC-135 Constant Phoenix, which is commonly referred to as a nuke-sniffer, arrived at Kadena Air Base, Japan, Sept. 5, 2017, days after North Korea's sixth and most powerful nuclear test. (Satoru Kuba/Special to Stars and Stripes)

CAMP FOSTER, Okinawa — Air Force aircraft that detect radioactive fallout and track ballistic missiles are operating on Okinawa in the wake of North Korea’s sixth nuclear test and ahead of an anticipated intercontinental ballistic missile launch.

A WC-135 Constant Phoenix — commonly referred to as a nuke-sniffer — arrived at Kadena Air Base Sept. 5, said Satoru Kuba, an Okinawan who monitors military aircraft. The Constant Phoenix, which specializes in identifying radioactive debris after the detonation of a nuclear device, departed the next day with a tanker aircraft, Kuba said, and has been parked at Kadena ever since returning.

North Korea tested its sixth and most powerful nuclear weapon on Sept. 3. The test was conducted on the heels of two groundbreaking ICBM launches in July that pushed the country closer to its stated goal of developing a nuclear-tipped missile that can reach the U.S. mainland.

Pyongyang is reportedly preparing to test-fire another ICBM in connection with the 69th anniversary of its foundation day on Saturday.

Two Joint Chiefs-directed RC-135S Cobra Ball aircraft, which the Air Force says “collect optical and electronic data on ballistic targets,” have been flying missions from Kadena since the end of June. The rapidly deployable aircraft took off from the air base as recently as Monday, Kuba said.

The Cobra Ball can track ballistic-missile re-entry vehicles and warheads during the final phase of their flight, according to Aviationist.com.

Officials from Kadena’s 18th Wing typically don’t comment on aircraft operations. Japan’s Ministry of Defense confirmed that the Constant Phoenix and Cobra Ball were operating from Okinawa but declined to comment further.

The U.S. government has been sending one of the Air Force’s two Constant Phoenix aircraft to the region since North Korea detonated its first nuclear device in 2006. The aircraft flew over Japan in 2011 after the meltdown at the Fukushima Dai-ichi nuclear power plant.

The modified C-135B uses external flow-through devices to collect air samples and debris that are sent to a lab for analysis.

The Cobra Ball — a descendant of the C-135 — is equipped with a “sophisticated array of optical and electronic sensors, recording media, and communications equipment,” according to an Air Force factsheet. It is considered vital to keeping America’s leaders and officials in the defense community informed when it comes to ballistic targets.

“This data is critical to arms treaty compliance verification, and development of U.S. strategic defense and theater missile defense concepts,” the factsheet said.

Like the Constant Phoenix, the Cobra Ball is a holdover from the Cold War, when it operated on 24-hour alert status out of the former Shemya Air Force Base in Alaska, the factsheet said. Since 1994, it has operated out of Offutt Air Force Base in Omaha, Neb. It also participated in Operations Enduring Freedom and Iraqi Freedom.