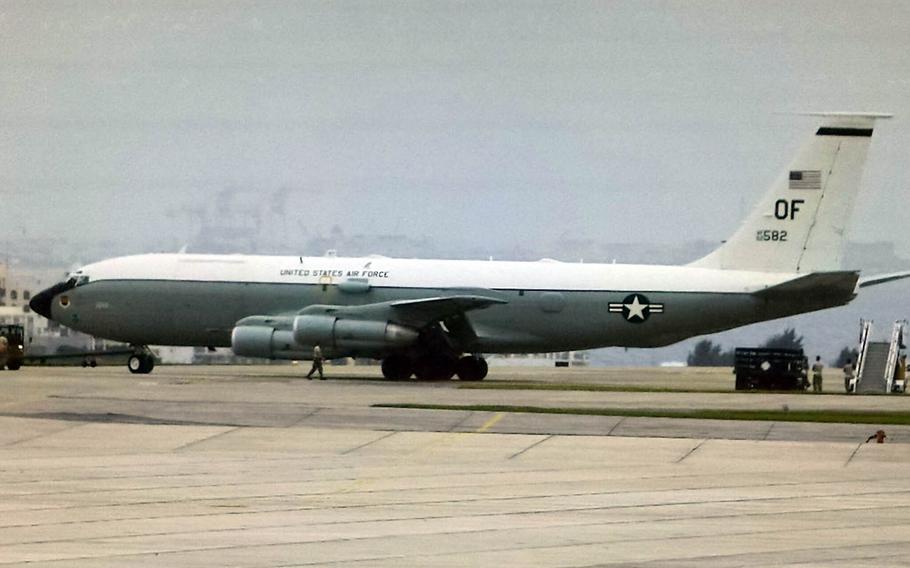 Buy Photo
An Air Force WC-135 Constant Phoenix, which is commonly referred to as a nuke-sniffer, arrived at Kadena Air Base, Japan, Friday, April 7, 2017. (Satoru Kuba/Special to Stars and Stripes)

Buy Photo
An Air Force WC-135 Constant Phoenix, which is commonly referred to as a nuke-sniffer, arrived at Kadena Air Base, Japan, Friday, April 7, 2017. (Satoru Kuba/Special to Stars and Stripes) 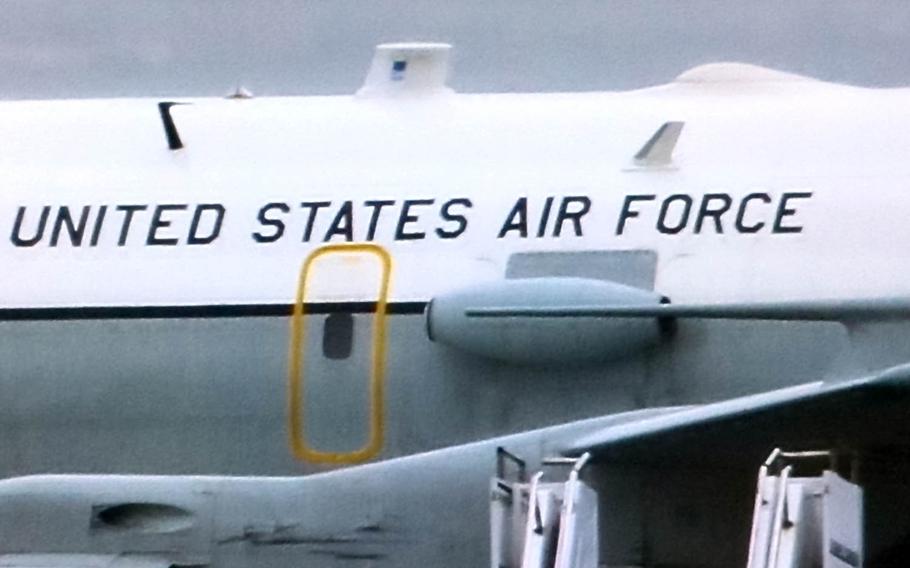 Buy Photo
An Air Force WC-135 Constant Phoenix, which is commonly referred to as a nuke-sniffer, arrived at Kadena Air Base, Japan, Friday, April 7, 2017, said an Okinawan man who monitors military aircraft traffic at the installation. (Satoru Kuba/Special to Stars and Stripes)

CAMP FOSTER, Okinawa — A U.S. aircraft that specializes in detecting radioactive debris after the detonation of a nuclear device has arrived on Okinawa amid rising tensions on the Korean peninsula.

Photos obtained by Stars and Stripes show the plane sitting on the base’s runway.

However, a senior Japan Self-Defense Forces official confirmed the aircraft’s arrival, according to a report Wednesday by Japan’s Nikkei newspaper.

The Pentagon has often deployed one of the Air Force’s two WC-135 aircraft to the Asia-Pacific region since North Korea detonated an underground nuclear device in 2006. The plane also flew over Japan in 2011 after the meltdown at the Fukushima Dai-ichi nuclear power plant, according to the Washington Post.

The modified C-135B uses external flow-through devices that collect air samples and debris. The samples later go to a lab for analysis.

The Constant Phoenix arrives at a time of growing tensions with North Korea, which has conducted two nuclear tests and test-fired nearly 30 missiles since last year.

Acting South Korean President Hwang Kyo-ahn has warned that the North may conduct “provocations” in connection with several upcoming events.

On Saturday, Pyongyang will celebrate the 105th birthday of Kim Il Sung, its late founder and grandfather of current leader Kim Jong Un. On April 25, the communist state will mark the 85th anniversary of its Korean People’s Army. In May, South Korea will hold presidential elections.

The tensions led Pacific Command to order the USS Carl Vinson strike group toward waters near the Korean peninsula for the second time in recent months, rather than onward to Australia for planned port visits.

President Donald Trump’s administration has signaled it will take a hardline stance against Pyongyang’s nuclear-weapons program and has called on further action from China to rein in its communist ally.

Chinese President Xi Jinping told Trump this week he would work with the U.S. to denuclearize the peninsula, but that it must be done peacefully.

The Constant Phoenix that arrived on Okinawa was at England’s Royal Air Force Mildenhall in March, according to photos of its tail numbers.

Air Force officials told Stars and Stripes in March the aircraft was on a scheduled routine mission and refuted media speculation that it was investigating a Russian nuclear test.

The Constant Phoenix next emerged in March when it had engine trouble on its way to Kadena and was forced to make an emergency landing in Banda Aceh, Indonesia. A spokesman from the Indonesian air force told The Associated Press the plane requested permission to land because one of its four engines had failed.

It was carrying 20 American military personnel from Diego Garcia in the central Indian Ocean, the spokesman told AP. The cause of the failure was unclear and no one was injured in the landing.