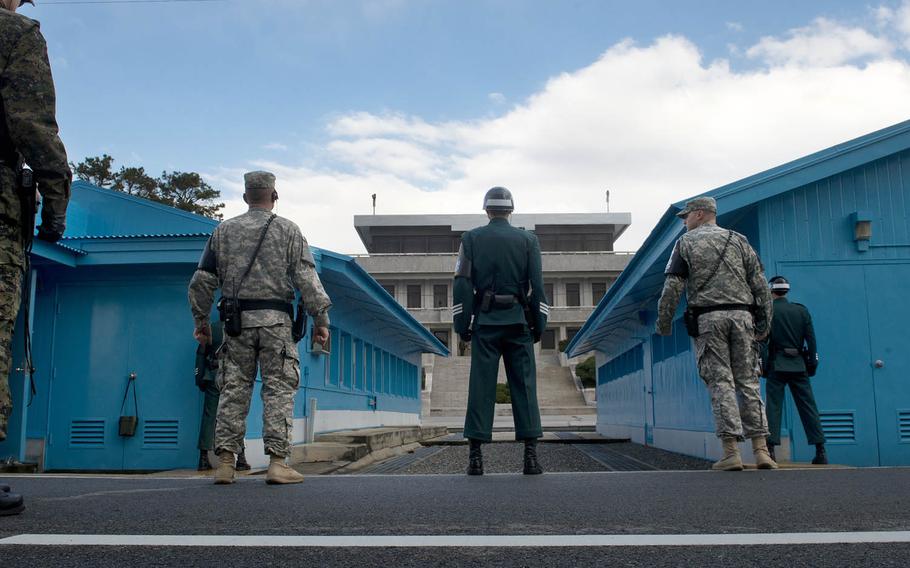 In this file photo from Nov. 11, 2012, South Korean and U.S. soldiers at the Demilitarized Zone in South Korea face North Korea. (U.S. Army)

SEOUL — The United States and South Korea agreed on the broad terms for Seoul to assume operational control of U.S. forces in wartime but fell short of nailing down the final details due to concerns over North Korea’s nuclear threat, defense leaders for both countries said Monday.

Operational control was to be a topic at this year’s Security Consultative Meeting between Defense Secretary Ash Carter and his South Korean counterpart Han Min-koo. But concerns that North Korea is preparing another nuclear test and developing long-range missiles capable of carrying a nuclear warhead delayed the process again.

Still, Carter called signing the conditions-based agreement “a major step forward” and said it will ensure South Korean forces have time to respond to a threat from North Korea.

“In the face of increasing threats, especially in the form of nuclear and missile threats from North Korea, we also agreed that the alliance needs to work in various ways to cooperate and to rise against and respond against these threats,” Han said.

The meeting came one day after officials for South Korea, China and Japan met for the first time in three years and agreed to push North Korea to return to six-party talks on its nuclear program. The talks broke down six years ago.

“The six-party talks can act as an effective platform,” Han said.

China’s apparent willingness to persuade North Korea to rejoin the negotiations shows the positive role it can play in the region, though its expansion in the South China Sea — through which about 30 percent of global trade passes — is a major concern.

The USS Lassen made a “freedom of navigation” cruise last Tuesday within China’s claimed 12-mile territorial limit around Subi Reef in the Spratly Islands. Subi is among the disputed reefs and islands where China has been dredging up new land and constructing airstrips and fortifications.

Carter said China’s provocations have led Pacific-area nations to seek “greater partnership with us in the areas of maritime security.”

However, the United States doesn’t “take sides in territorial disputes,” he said. “But we do staunchly sit on the side of resolving them peacefully,” calling for no “further dredging or militarization in the South China Sea.”

Han declined to overtly support the U.S. sail through the Chinese-claimed Spratly Islands.

“This is a maritime route that is very important to us and our interests,” he said. “In terms of any conflict … they should be resolved within the framework of international law. ... We have asked to refrain from any action that threatens the peace and stability of this area.”

The consultative meeting was aimed at identifying and agreeing to what would be needed by South Korean forces for operational control of the country’s defenses, including the 28,500 U.S. servicemembers stationed here. A U.S. general would assume that responsibility now if war broke out.

Wartime powers were to have shifted to a South Korean commander next month. But last year, the United States and South Korea agreed to delay the power shift, citing North Korea’s growing nuclear threat.

The United States has led the defense of South Korea since the two countries signed a Mutual Defense Treaty in 1953 following the cease-fire that ended fighting in the Korean War, but not hostilities.

The transfer, originally planned for 2007, likely remains years away, and the two sides did not announce any developments on any changes to U.S. bases.

Instead, Han said the two sides “aim to reassess many of the issues.”

Among the issues are the types of counter-battery fires that South Korea needs, and the communications, surveillance and intelligence systems it would put in place.

There also has been debate in South Korea about whether to allow the United States to deploy a Terminal High Altitude Area Defense ballistic missile system in the country.

China opposes the deployment of THAAD in South Korea, saying it would spark an arms race.

Han said THAAD “was not discussed, and we have not made any agreement related to THAAD.”

Carter said deploying the system in South Korea “would be an alliance decision.”

Han defended South Korea’s continued reliance on the United States, saying many countries around the globe rely on partnerships for their self-defense. In deference to the region’s volatility, it is in South Korea’s best interest to “maintain its alliances.”