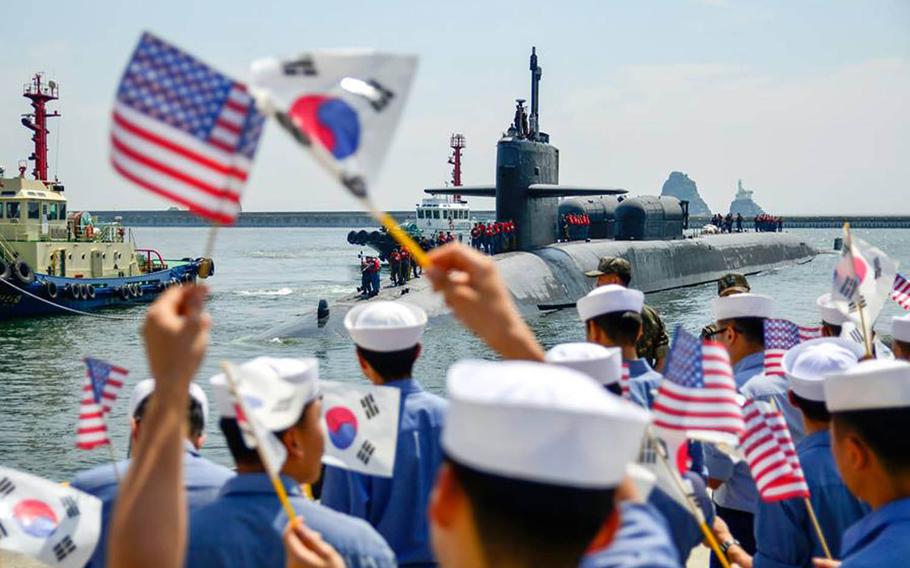 The Ohio-class guided-missile submarine USS Ohio arrives in Busan, South Korea, Wednesday, July 13, 2016. It comes at a time of heightened tensions on the divided peninsula, but the Navy said it was a routine visit. (Wesley Breedlove/U.S. Navy)

SEOUL, South Korea — A nuclear-powered U.S. submarine sailed into the southern port of Busan on Wednesday as part of a regularly scheduled deployment to the Pacific, the Navy said.

The USS Ohio’s arrival comes at a time of heightened tensions on the divided peninsula, but the Navy called it a routine visit.

North Korea objected strongly to a similar port visit by the USS Mississippi last month, calling it a “direct threat” and vowing to bolster its nuclear-deterrence capabilities as a response.

The 560-foot long, guided-missile Ohio submarine will be at Busan for several days. It is the first time visiting the South Korean city for many of the crewmembers, a Navy statement said.

The submarine is the first of four Ohio-class, guided-missile submarines and is capable of launching missile strikes and supporting missions by Special Operations Forces from a “stealthy and clandestine platform,” the Navy said.

The USS Ohio’s home port is in Bangor, Wash., and it is forward deployed from the U.S. territory of Guam.