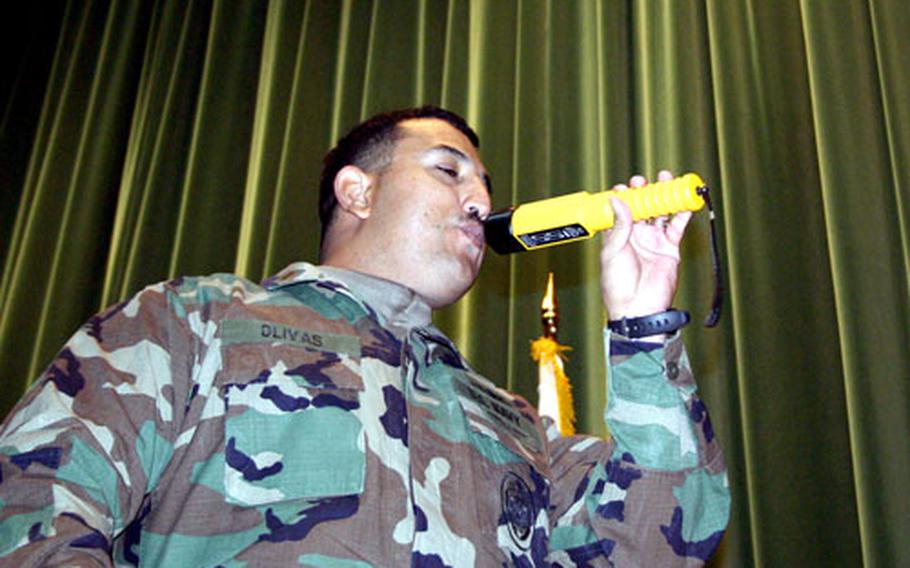 Ensign Shawn Olivas, with security at Naval Support Activity Naples, Italy, demonstrates how security forces can test a driver’s blood alcohol level by using the AlcoBlow, a wand that can detect the presence of alcohol on someone’s breath and in the air. (Sandra Jontz / S&S)

NAPLES, Italy &#8212; People don&#8217;t always do the right thing for the simple sake of doing the right thing. Toss in a reward, and well, things likely will be different.

&#8220;Offering an incentive is a great idea,&#8221; 19-year-old Seaman Miles Good said Monday after Navy officials in Naples announced an impromptu plan to reward sailors who, while serving as designated drivers during the holiday season, test negative during random sobriety checks.

The base executive officer, Cmdr. Jeff Jackson, capitalized on the theory that positive reinforcement nets results. Sailors assigned to Naval Support Activity Naples who do the right thing are eligible for two days of leave.

&#8220;This is not about not having fun, this is about doing it right,&#8221; Jackson told a semicrowded movie theater of sailors during Monday&#8217;s training session.

From now through the New Year&#8217;s celebrations, NSA Naples base and security personnel will be pushing an aggressive safety message to keep motorists from driving drunk.

But the campaign &#8212; especially the random sobriety checkpoints in and around U.S. Navy installations here, which will be done year-round &#8212; won&#8217;t end with the popping of champagne corks on New Year&#8217;s.

Starting this season, security personnel have a new tool in their arsenal to check for the presence of alcohol.

AlcoBlow wands, at $340 each, can detect alcohol in the ambient air in a car, for example, or on someone&#8217;s breath, said Ensign Shawn Olivas, head of security operations. And take note, he said, security can and will test the seemingly benign soda can.

Naples has three of the wands, which work rather reliably, he said. He&#8217;s tested the device.

After drinking a beer and waiting five minutes, Olivas blew into the AlcoBlow and it came back with a negative result. After a second beer and a 15-minute wait, the results put him over the legal limit to drive, Olivas said. Two glasses of wine yielded the same results.

A blood alcohol level of more than 0.05 percent &#8212; lower than the military&#8217;s threshold of 0.10 percent &#8212; is considered legally intoxicated in Italy. U.S. servicemembers, civilians and their families are bound by the host nation laws.

Servicemembers found driving while legally intoxicated will be arrested, have their driving privileges suspended, and can face other disciplinary action, officials said.

Officials also promoted the Tipsy Taxi program run by the Chief Petty Officers Association, a no-questions-asked, free-cab-ride-home program that operates year-round. However, the free rides go only to two designated sites &#8212; NSA Capodichino or the Support Site at Gricignano.

The Tipsy Taxi program has been extended to cover sailors all year long. If you have had too much to drink or your driving ability is otherwise impaired, wherever you are in the Naples area, don&#8217;t get behind the wheel. For a free ride, call: