'Now we're going to them instead of waiting to get hit' Soldiers from the 11th Cavalry Regiment take a rest in Cambodia in May, 1970. (John Cody/Stars and Stripes)

Soldiers from the 11th Cavalry Regiment take a rest in Cambodia in May, 1970. (John Cody/Stars and Stripes) 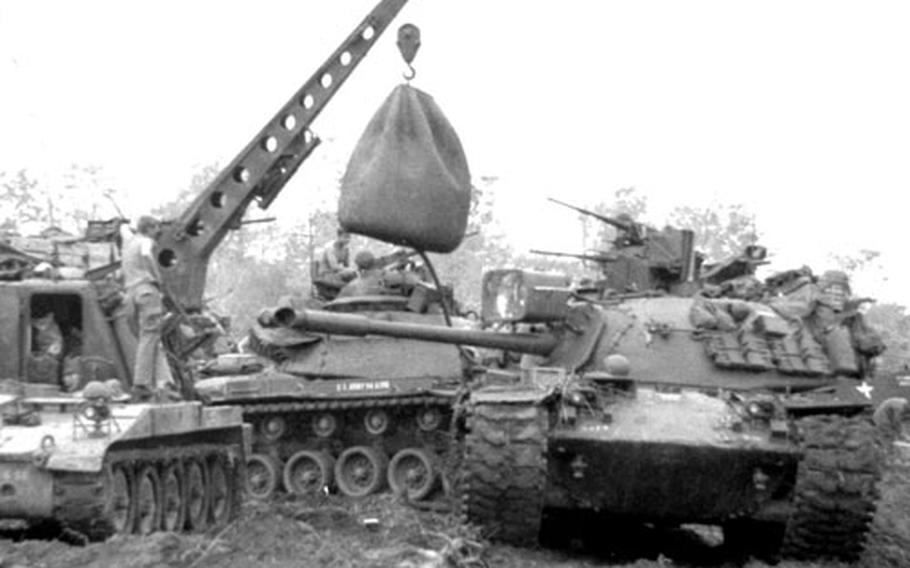 Armored vehicles are refueled from a fuel bladder lifted by a light tracked vehicle recovery unit. (John Cody/Stars and Stripes) Armored vehicles are silhouetted against the light from flares during a night firefight. (John Cody/Stars and Stripes)

WITH AMERICAN FORCES IN CAMBODIA — The cloudy night shattered by nearby B52 strikes ... a deafening response to a single incoming rocket round ... the sound of lizards and frogs croaking in a quiet little pond near the perimeter....

"It's all the same war," said Sgt. David McWherter, 24, an M48 tank maintenance man with the 2nd Sq., H Co. "They're fighting the same damned guys except now we're coming to them instead of waiting to get hit."

McWherter reflected the general feeling of the 11th ACR troopers as they set up their night perimeter inside Cambodia.

Their excitement at pushing across the border had been subdued by the death of two buddies, blown from their armored cavalry assault vehicle (ACAV) by a rocket-propelled grenade which the NVA fired from inside a spider hole.

Clustered around portable radios, the Blackhorse crewmen listened almost dispassionately to Saigon news reports of their four-mile march into Cambodia.

Most of them seemed in favor of the cross-border thrust.

"I'd rather go after them than have them come after us," said 1st Lt. Earl Zerbach, 26, forward observer for 2nd Sq., G Troop.

The lead element had lifted out their dead and wounded and rolled back 400 meters toward their night defensive position as dusk approached.

They smashed through the tangled vegetation rather than traveling in parallel formation. The NVA trail was as hard-packed as a paved asphalt road by heavy Red usage.

The tanks — ACAVs and Sheridans — ranged around the edges of the clearing surrounding a shallow pond and a carefully cultivated garden, five parallel rows of low-lying greenery dotted with white blossoms.

As the crews tightened loose tracks on their vehicles and uncrated ammo, 2nd Sq. Commander Lt. Col. Grail L. Brookshire summoned the troop commanders for a staff meeting in his command tent.

Brookshire had few words to say about the implications of moving across the border. "It's been cleared at the highest levels — my job is right here."

He said, "We'll stay in the jungle and off the trails away from the mines. The 3rd Sq. will secure our corridor."

Asked about any differences between fighting in Cambodia and South Vietnam, Brookshire said, "Terrain's about the same, but here we don't have the same relatively secure evacuation routes for vehicles and our supply line is longer."

In the northern skies flared yellow flashes and the rhythmic hammer of nearby B52 strikes shook the earth and battered the eardrums.