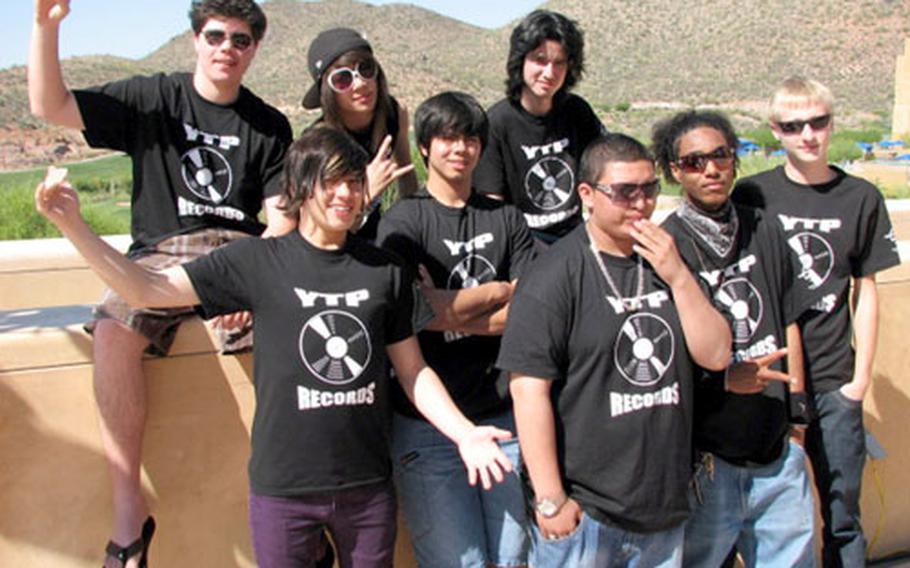 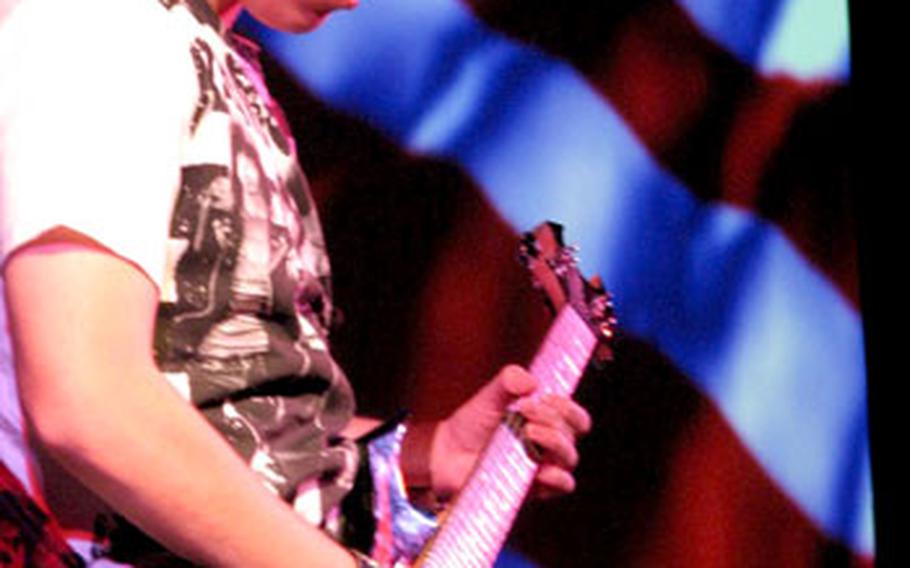 Guitarist D.J. Mincks performs the Star Spangled Banner during the wrap-up event at a conference for Navy youth professionals May 2 in Tuscan, Ariz. (Lee Leach / Courtesy of Yokosuka Teen Program) 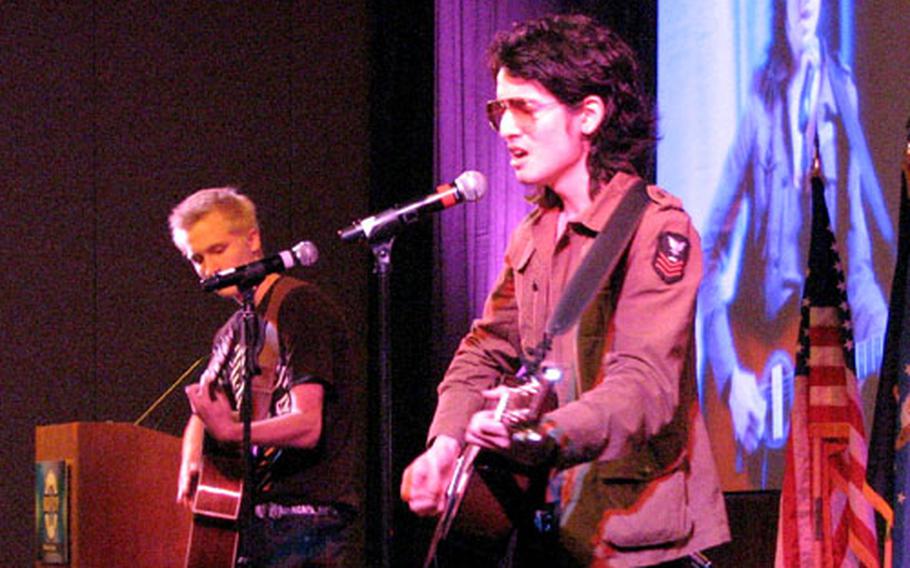 Brian Walters (right) and Jordan Krunich of the group "12 Strings" cap off the week-long Navy Child and Youth Programs Conference in Tuscan, Ariz. with an acoustic performance in front of a packed ballroom. The two joined six others in traveling to the States to represent the Yokosuka Naval Base Teen Center&#39;s music program. (Photo courtesy of Pat Groves)

Tucson, Ariz., has seen its share of rock, rap and R&B stars.

Last month, the city was treated to a one-stop shop for all three music genres courtesy of eight military dependents from Yokosuka Naval Base, Japan.

The teens came out to represent the Yokosuka Teen Center&#8217;s groundbreaking music program at the Navy Child and Youth Programs Conference. The annual event helps bring to light the latest in Navy youth programs around the world.

This year, efforts in Tucson made a splash that helped net the center thousands in cash while potentially paving the way for other military bases to implement similar music programs.

The teens, making up four musical acts, played to a packed ballroom of 300 Navy youth professionals in capping off the final day of the conference. Following their performance, they spent an hour accommodating their fans who stood in line waiting to get autographs.

Based on the success of the trip, interested parties representing Navy youth programs on Guam and Key West, Fla., as well as the Boys and Girls Club national conference in Atlanta have all called requesting the Yokosuka teens to come out and perform. They&#8217;ve also received invitations from neighboring communities Yokota Air Base and Naval Air Facility Atsugi.

"It&#8217;s getting to the point that we can almost have a full-time position just being a tour manager for these guys," laughed Rhinehart, who said he didn&#8217;t envision this three years ago when he requested funding for a new music program at the teen center.

He got the idea after catching one or two talent shows at the base&#8217;s Kinnick High School and from noticing kids on base carrying around guitars. The first thing Rhinehart did was convert an old storage closet into a rehearsal studio.

As more and more teens started filtering in, Rhinehart said, the center started hosting open-mic nights and jam sessions. Then came recording equipment and a recording/mixing room. All told, the center put roughly $30,000 into the project, he said.

Several teens became go-to options for playing events around the base; some even opened up for touring acts. One such artist, who goes simply by Braddigan, of the former band "Dispatch," stayed following his show and held a private music clinic with the teens.

Members of the 7th Fleet Band also have come to the teen center and done clinics, keeping with the educational theme the program emphasizes, Rhinehart said.

The program continued to progress to where the center decided to build their own record label, called YTP (Yokosuka Youth Program) Records.

As acting manager for the group, Rhinehart can do most things for the teens that other labels can do, including television and print marketing, getting them gigs and flying them out to different locations. The only thing he can&#8217;t do for them, he says, is distribute their demos.

Currently, two of the four acts that performed in Arizona are signed to the label and plans are in place to sign the remaining teens. One of those artists is 15-year-old Andrew Brenyo, who goes by his stage name, Andreaz.

It was right around the time that Andreaz hammered out an R&B recording in three hours &#8212; beating out thousands of other kids in an international song-writing competition for the Boys and Girls Club &#8212; that Rhinehart knew he had helped bring to light some major talent.

Andreaz likes the thought of all this exposure possibly changing the way some people may perceive military kids.

For his part, Andreaz appreciates the chance to get his music out there for people and adds he isn&#8217;t necessarily looking to become a huge star.

Sean (Pat) Groves, 16, a guitarist with "That Rockin Band," the other act currently signed to the label, said the Arizona trip opened his eyes to what a special program he&#8217;s involved with.

For their Arizona efforts, the Yokosuka Teen Center was awarded a $25,000 grant from Commander Navy Installations to expand its music program.

According to Rhinehart, CNI also plans to present a proposal to Navy leadership at the Pentagon to implement similar programs on bases worldwide. As excited as Rhinehart is about the fast success of the teens, he cautions against the idea that Yokosuka is "unique" in its seemingly random, young talent.

"These are just normal, average kids from a teen center," he said. "These kids are unique to our base but they&#8217;re not unique to the world. I guarantee when you go to any military base &#8230; you&#8217;re going to find kids who are this talented. They just need to have it fostered."