Not everyone on Guam happy about military expansion 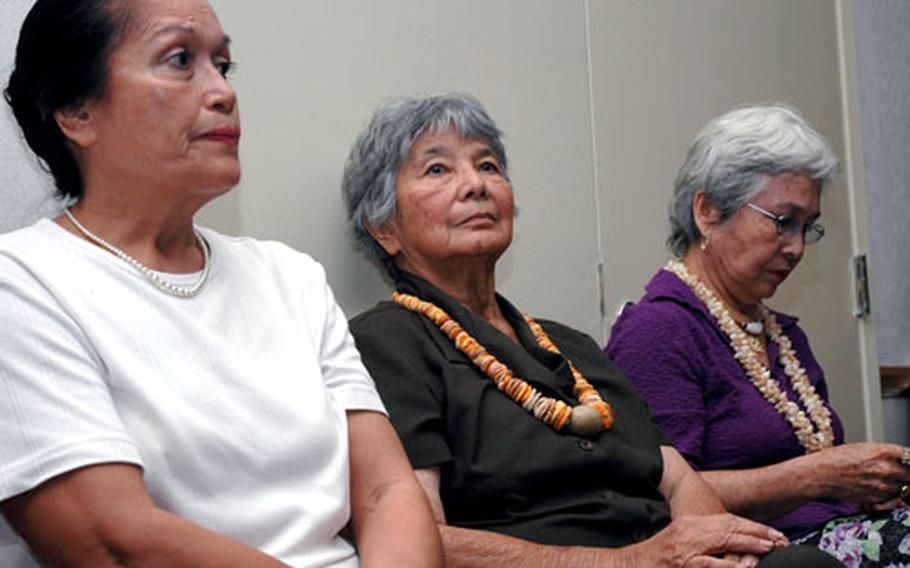 TUMON BAY, Guam &#8212; While merchants, politicians and other local residents are lining up in support of a U.S. military buildup here, a small but persistent group of people plan to use this most recent interest in Guam as a way to once again fight for war reparations, military resistance and respect.

Kuwabara, of the Office of Economic Assistance, spoke last week at the first official meeting of Gov. Felix P. Camacho&#8217;s civilian and military task force, a collection of committees and subcommittees expected to help Guam prepare for a buildup that would more than double the island&#8217;s current military population.

But the gathering also provided the first of many opportunities for residents to push leaders to talk about other issues that some Guam residents say are long overdue. They also wanted to know what role Chamorros &#8212; the native people of Guam &#8212; will play on the task force and with the military buildup.

So far, local activists for Chamorro rights and those against the buildup have protested a visit by Marine Gen. Peter Pace, the Joint Chiefs of Staff chairman. They also use AM talk radio to discuss the pending buildup, said Debbie Quinata, a longtime activist who hosts a weekday afternoon show.

Guam&#8217;s delegate to Congress, Madeleine Bordallo, denied that&#8217;s the case. A bill to spend $180 million in war reparations for Guam residents has passed through two U.S. House of Representatives committees and likely will go to the floor for a vote, she said in an interview last week.

The proposal calls for giving residents there during the Japanese occupation of World War II, or who are descendants of such residents, $25,000 for each death during that occupation, up to $15,000 for serious injury and $10,000 for forced march or internment, according to an article in Guam&#8217;s Pacific Daily News last month.

Bordallo, who supports the buildup, said she also believes the Pentagon and local military leaders are working to improve relationships with Guam residents.

&#8220;I think they&#8217;re trying very hard,&#8221; she said, adding that most Guam families, including her own, have several members who are active-duty members or veterans of the armed forces.

&#8220;I&#8217;ve lived with the military for many, many years on Guam. They&#8217;ve always been community-oriented. Whenever we have disaster storms, the military are there to help us out, to clean up. And I would like to see that continue with this move. And I think it will.&#8221;

Quinata, too, has family in the military. But she&#8217;d like to see the military do more for the way it uses Guam now.

Others say they want to ensure residents&#8217; concerns are taken seriously. How will the military help, for instance, if workers come from nearby islands for construction jobs then decide to stay, Rita Franquez of Agana asked after last week&#8217;s meeting.

Bordallo on Wednesday said she believes those problems will be addressed.

The deputy commander of U.S. Pacific Command, Air Force Lt. Gen. Daniel Leaf, is the man charged with overseeing the move of 8,000 Marines to Guam and other military buildup on the island.

Leaf is scheduled to visit Guam in August, to meet with local military officials and government leaders and begin discussions about how Guam might benefit from the construction and increased military presence.

Leaf told Stars and Stripes last week he also plans to meet with community leaders to hear their concerns about the changes.

&#8220;I grew up in a town with 6,000 people in it, less than the number of Marines that are going to move to Guam. I recognize the significant impact. So we&#8217;ve got to come and be straightforward about what our intent is, demonstrate that we clearly intend to coordinate closely with the local leadership.