Not all cures for hangovers are worth following 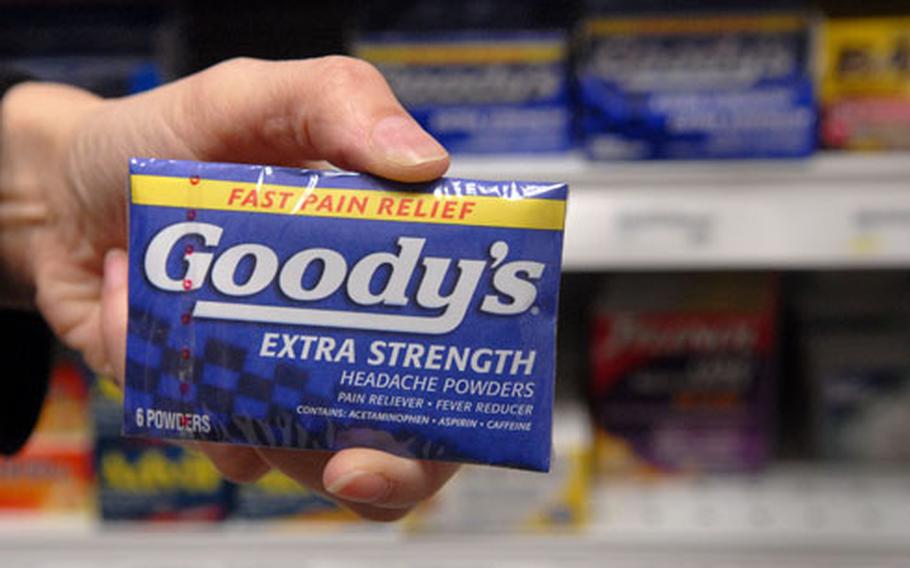 One possible solution for the New Year’s Day hangover is Goody’s headache medicine, like this six-powder packet found at Ramstein’s shoppette. (Ben Bloker/S&S)

Some holidays, when observed in proper fashion, may require celebrants to spend the following day paying for their indulgence.

New Year&#8217;s Day may be one such occasion. But there is, regrettably, no straightforward cure for the day that follows an appropriately corrupt New Year&#8217;s Eve.

Science has yet to crack the hangover, but there is no shortage of homespun advice on how one might try.

This counter-intuitive gem is as good a place as any to start: To overcome bottle fatigue, "don&#8217;t stop drinking," said Spc. Ryan McCray, who is assigned to the Warrior Transition Unit in Vicenza, Italy.

Asked to clarify, he said death was the likely outcome.

Death, though, is heavy medicine, and doctors agree that it works just once.

Pfc. Chebbi Ramzi instead recommends a single beer in the morning on days you don&#8217;t have to work, and espresso on the days you do. Take it when you wake up, he said, and "most of the time it works."

But is it possible to avoid a hangover even while partaking in adult New Year&#8217;s festivities?

Sure, said Pvt. Lance Fluellen, a member of the 66th Transportation Company.

That, of course, is the voice of youth.

For wisdom, follow this counsel: "Don&#8217;t drink," said Sgt. Maj. John Reynolds of the 21st Theater Sustainment Command in Kaiserslautern. "If you&#8217;re under control then you won&#8217;t have anything to worry about."