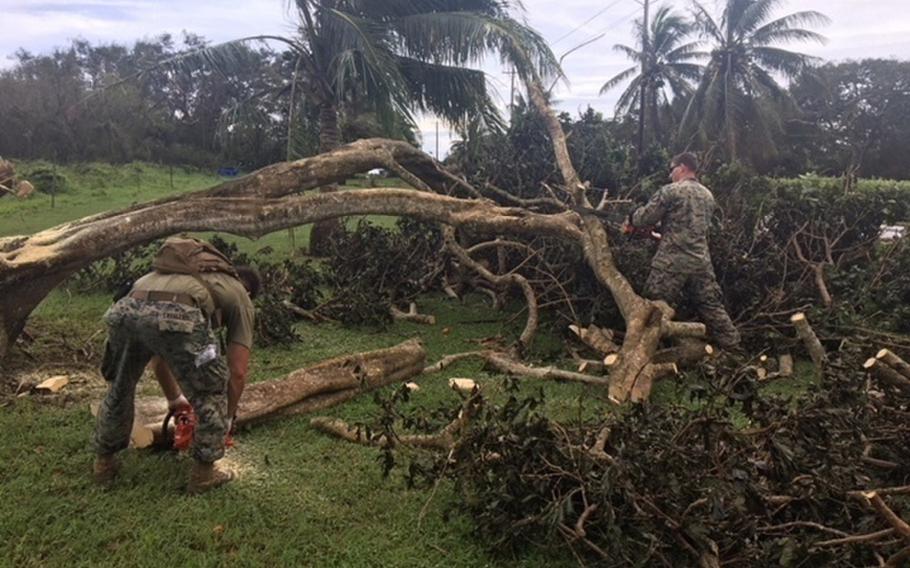 Military installations in the Northern Marianas remain “mission capable,” the Navy said Thursday as crews cleared debris from a storm that tied for the strongest so far this year.

Super Typhoon Yutu hit the U.S. Commonwealth of the Northern Mariana Islands in the early morning with sustained winds of 180 mph, enveloping much of the island of Saipan and all of Tinian.

“There have been reports of major damage to structures and property, but all U.S. military personnel are currently accounted for,” Lt. Cmdr. Karl Lettow, a Joint Region Marianas spokesman, told Stars and Stripes via email.

The Saipan Tribune, quoting the governor's office, said a 44-year-old woman was killed when a building collapsed on Saipan during the height of the storm.

Yutu was as severe as last month’s Typhoon Mangkhut, which damaged the Northern Marianas before slamming into the Philippines, killing 127 people.

Assessment of conditions on the bases is ongoing, but all are fully capable of their mission and leaders are expecting Friday to be a normal workday, Lettow said.

Military personnel were standing by to coordinate support for the Federal Emergency Management Agency-led recovery effort, he added.

A statement Thursday from the Office of the Governor of the Commonwealth of the Northern Mariana Islands said a typhoon watch was still in place on Tinian and Saipan and residents should stay indoors even though the storm was moving away.

“Downed power poles as well as fallen debris are blocking roadways. In addition, the islands of Tinian and Saipan are continuing to experience damaging winds making it dangerous for motorists to be on public roadways,” the statement said.

“Our focus is on deploying resources to clear our roadways so first responders can begin assisting residents who have lost their homes and for those who need transport to seek medical attention or transportation to the nearest shelter,” the statement said.

Gerald Deleon Guerrero, a special assistant with Homeland Security and Emergency Management said in the statement that Yutu was “one of the worst storms I’ve seen in all my experience in emergency management.”

Tropical-storm force winds extended up to 240 miles from the center of the typhoon, meaning Tinian and Saipan would continue to experience damaging winds well into early evening, the statement said.