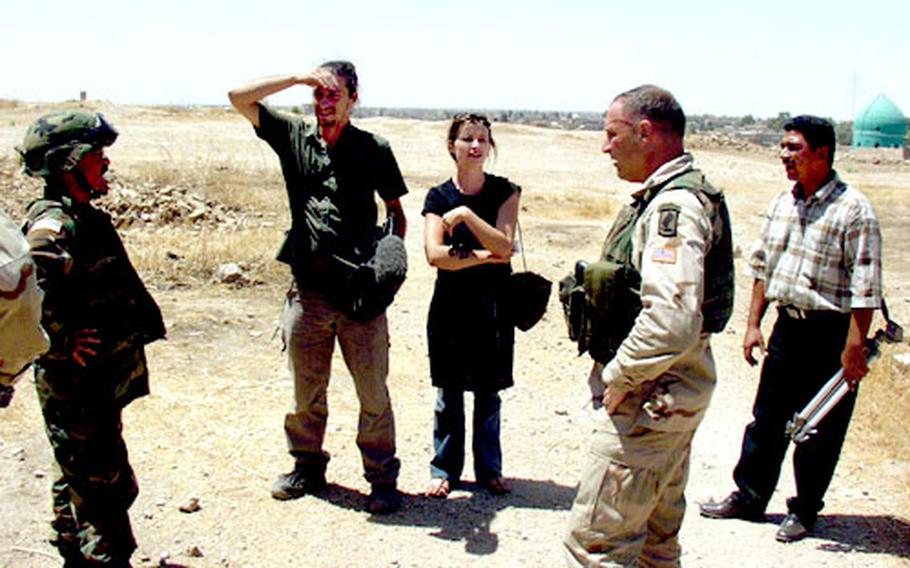 Lt. Col. Dominic Caraccilo talks with Australian journalists and their Iraqi translator near Kirkuk, Iraq. Caraccilo, commander of 2nd Battalion, 503rd Infantry Regiment, and his soldiers had stormed the area after getting reports of someone carrying a rocket-propelled grenade. (Kent Harris / S&S)

KIRKUK, Iraq &#8212; Some numbers are in short supply when looking at Iraq&#8217;s fourth largest city these days.

First, there&#8217;s the population, which is relatively unknown, though it&#8217;s guessed to be about 40 percent Kurdish, 30 percent Arab and 25 percent Turkmen, with the rest Assyrian.

A mere 2,000 policemen are on hand to protect a city of about 1 million people, though the police get a little help from a small group of American soldiers: the 2nd Battalion, 503rd Infantry Regiment.

Other hard-to-pin-down numbers include a relatively low crime rate and few attacks against American forces in the area.

The compound&#8217;s got a pool and a yard that soldiers have spent a lot of time cleaning up. It&#8217;s basically home, said Capt. Arie Richard, the company&#8217;s commander.

Battalion commander Lt. Col. Dominic Caraccilo said his soldiers are aggressive. When they need to, they kick in doors during raids and grab all the guns they find. That policy is different from one practiced in Baghdad, where families are allowed to keep guns for protection.

At the same time, units are involved in myriad activities around the city. They&#8217;ve purchased more than a dozen police cars and helped fix up the stations, bringing them to standards unseen in many other parts of the country.

That might be why Kamaladdin Fuad, one of the deputy chiefs of police, has few negative things to say about his American counterparts. One of those few complaints is that soldiers are too nice with criminals. Those people shouldn&#8217;t be given second chances, people tell him.

Kirkuk residents appear to generally obey the police. Most people even stop at the traffic lights. That&#8217;s unheard of these days in Baghdad. And in Kirkuk, even the Americans in Humvees generally stop.

Caraccilo said his soldiers find out a lot of what&#8217;s going on in their communities during foot patrols. That information is later used to bust criminals or fund needed projects.

He follows his own advice regarding interaction. Heading through a market area after a visit to the police headquarters, he&#8217;s waved down by local Iraqis. They point up across the river to a plateau that overlooks the city. Someone has a rocket propelled grenade, they say.

From a distance, it looks like it. So the Humvees quickly cross a bridge.

Seconds later, with guns ready, Caraccilo and Rice lead the group charging up a steep hill. This time, they find it&#8217;s only a pair of startled Australian journalists with a television camera. But Caraccilo&#8217;s made a point.