South Korean guards open the gates of the southern boundary of the DMZ as a U.S.-Korean negotiating team returns from a meeting with the North Koreans about traffic through the Western Transportation Corridor. (Joseph Giordono / S&S)

South Korean guards open the gates of the southern boundary of the DMZ as a U.S.-Korean negotiating team returns from a meeting with the North Koreans about traffic through the Western Transportation Corridor. (Joseph Giordono / S&S) 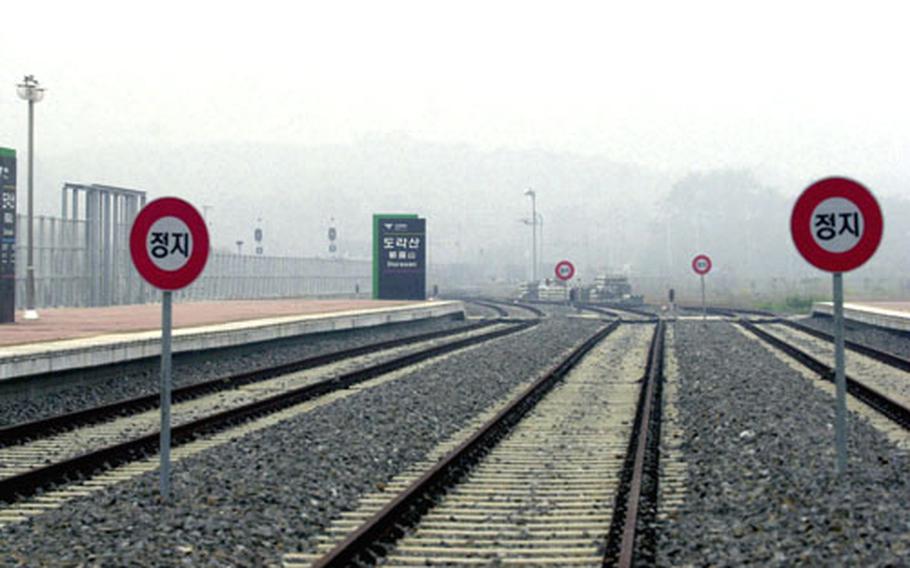 Officials hope that one day soon, these railroad tracks leading north from Dorasan Station will send people and trade through a reunified Korea. (Joseph Giordono / S&S) 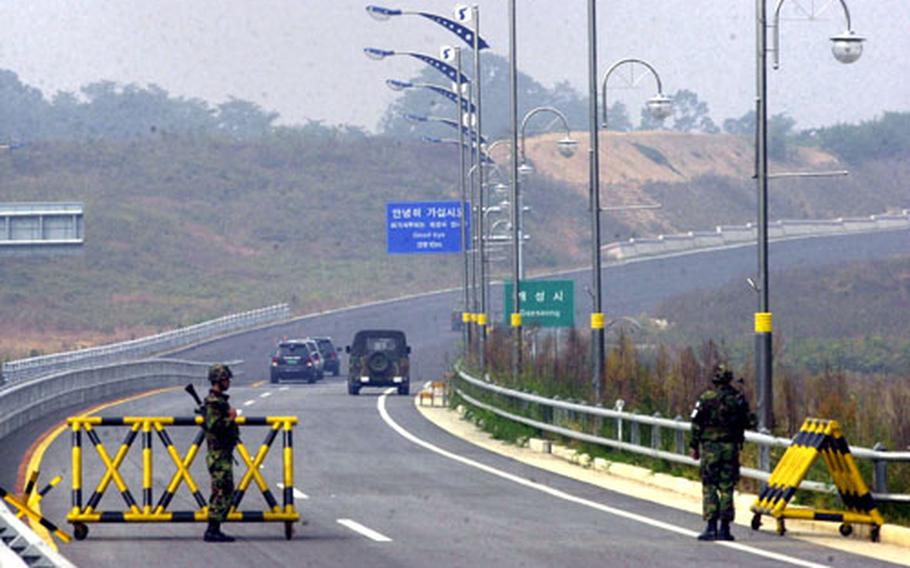 A group of South Korean officials is escorted across the Military Demarcation Line, the official border between North and South Korea. The border is where the painted lines on the road stop; the blue road sign, reading in part “Good bye,” marks the final 10 meters of South Korean territory. (Joseph Giordono / S&S) 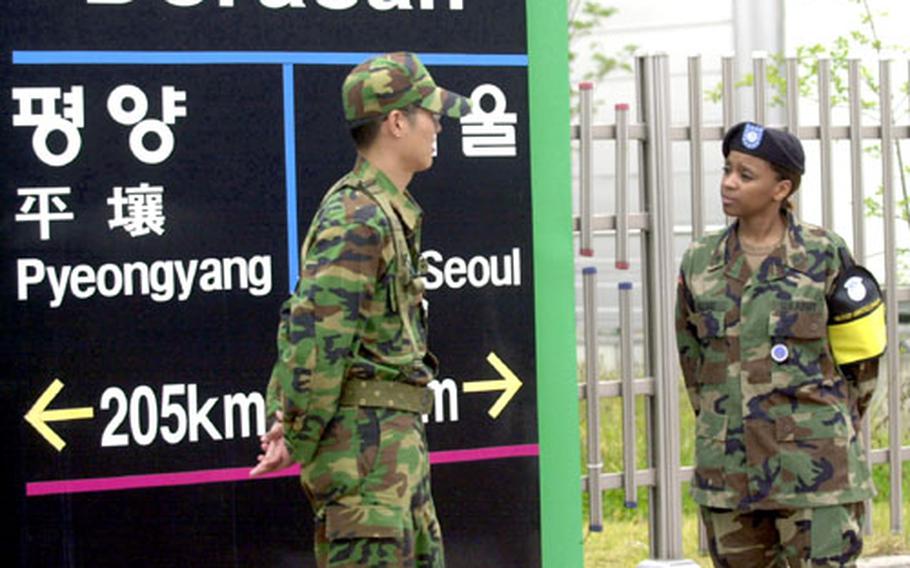 THE KOREAN DEMILITARIZED ZONE &#8212; Inside the world&#8217;s most heavily fortified border, a small trickle of trade passes between North and South Korea, carrying not just raw materials but the hope of a thawing relationship on what&#8217;s sometimes called the last front of the Cold War.

The overland trade route is the Western Transportation Corridor, a stretch of asphalt and rail lines that cut straight across the Demilitarized Zone. On an average day, some 100 trucks cross back and forth on the corridor, created after the 2000 summit between then-South Korean president Kim Dae-jung and North Korean leader Kim Jong Il.

When the corridor opened last year, it became the first land route between the Koreas since 1945. In the near future, officials hope, today&#8217;s traffic figures will be dwarfed by the free-flowing movement of goods and people.

&#8220;This is a historic thing that has proceeded over the past four years,&#8221; said Air Force Maj. Gen. Thomas P. Kane, the senior U.S. member of the United Nations Command Military Armistice Commission, or UNCMAC.

&#8220;This is a linking of the North and South in the hope that reconciliation will occur in the not too distant future. Within a year, we could have 2,000 movements, a thousand each way.&#8221;

In its role at the head of UNCMAC, the U.S. military keeps close watch on the DMZ and the transportation corridor. The fledgling trade route leads to the Kaesong Industrial Complex, a South Korean-built initiative about 10 miles north of the DMZ. Most of the traffic on the corridor is construction materials for an industrial park and the rail line and highway leading north.

The road also is used by buses carrying a small number of South Korean tourists on closely regulated trips to the North&#8217;s Diamond Mountain resort.

According to U.S. officials, the corridor so far has cost South Korea $230 million and North Korea $120 million.

During construction of the road, some 1,500 land mines and other pieces of unexploded ordnance were removed from the area, said Lt. Col. Kurt Taylor of UNCMAC. Only one worker, a North Korean soldier, was injured in the demining project.

On a hill high above the Western Transportation Corridor, U.S. soldiers give briefs to visitors at Observation Post Dora. Inside the camouflage concrete structure, a large sand-table scale model of the DMZ sits in front of a huge bank of windows, surrounded by an amphitheater of neon-green plastic seats. On a clear day, soldiers say, Kaesong is easily visible.

On this day, the morning fog means the only thing visible is a pair of dotted lines painted onto the windows, representing the northern boundary of the DMZ and the Military Demarcation Line &#8212; the official border between North and South Korea. On maps, it is a dotted line. In reality, the border is marked inside the transportation corridor by a sudden change in the color of the asphalt and the end of white-painted traffic lines.

From a concrete terrace at OP Dora, visitors can watch trucks rumble along the route, adding to the daily trade figures.

The transportation corridor has not been a complete success. North Korea is irked that the United States, as lead partner in the armistice commission, will not allow 39 high-tech electronics and communications items to be included in the cross-border trade.

And on-and-off negotiations between North and South are always subject to delay or cancellation, as they were for three months this year after South Korea took in hundreds of North Koreans in a mass defection.

But on this day at Dorasan Station, which will become the main rail portal for both trade and tourism, Army Sgt. Yolanda Ballard stood chatting amiably with a South Korean soldier. Behind them, a colorful train station sign listed Pyongyang and Seoul, with their respective distances from the station listed below arrows pointing opposite directions.

Ballard and the South Korean could have been any two people waiting at any normal train station &#8212; if not for the miles of barbed wire, thousands of soldiers and fifty years of forced separation represented by the DMZ just a few thousand yards to the north.

Later, at a heavily guarded post on the DMZ&#8217;s southern boundary, a convoy of dump trucks rumble South through the corridor. Each of the twenty trucks is carrying about 20 tons of sand, one of the items exported south from North Korea. As soon as the trucks pass through the spiked gates, the South Korean guards close the fence and resume their guard positions.

For as far as can be seen through the morning haze, the barbed-wire-topped fence stretches to the horizon.