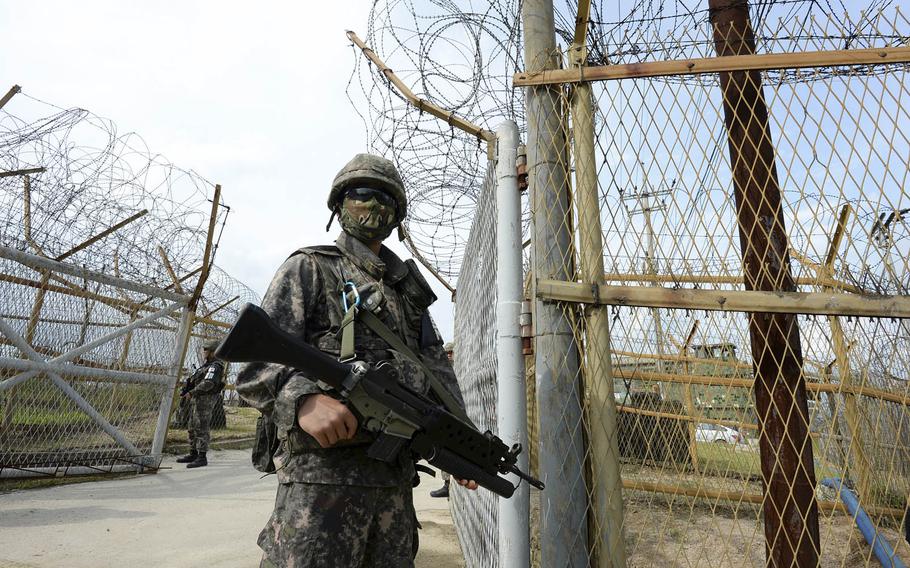 A South Korean soldier stands guard near the scene of a blast inside the Demilitarized Zone near Paju, South Korea, Aug. 9, 2015. South Korea has announced a series of measures aimed at deterring another North Korean land mine attack, from broadcasting anti-Pyongyang messages across the DMZ to changing patrol times for its soldiers. (Courtesy of South Korean Defense Ministry)

SEOUL, South Korea — North and South Korea are scheduled to hold high-level talks at the border village of Panmunjom on Saturday evening, the South’s Ministry of National Defense said — in hopes of averting a clash along the tense Demilitarized Zone.

The 6 p.m. meeting would take place an hour after the North’s deadline for the South to discontinue propaganda broadcasts across the border. Military officials said the hastily called meeting is expected to avert immediate military action by the North.

“The North won’t do anything while they’re talking to us,” a spokesman for the Joint Chiefs of Staff said, speaking on customary condition of anonymity, about two hours before the meeting.

Tensions on the peninsula are at the highest level in years following a series of incidents in the last two weeks, which has included the two countries firing shells across the border.

On Saturday afternoon, four U.S and four South Korean fighter jets flew over South Korea in a show of force meant to alarm the North, according to a South Korean Joint Chiefs of Staff spokesman.The one-hour flight, which was unannounced, took a path from the East Sea westward to Osan and simulated the bombing of enemy targets, a spokesman said, speaking on customary condition of anonymity.

Earlier in the day, the U.S. military announced that it had placed its troops on an “enhanced status” as a deterrent measure as it resume an annual computer-simulated war exercise with South Korea.

The Ulchi Freedom Guardian military exercises had been temporarily halted this week, “in order to allow the U.S. side to coordinate with the (South Korean) side on the actual exchange of artillery fire across the DMZ, said David Shear, assistant secretary of defense for Asian and Pacific Security Affairs. “That exercise has resumed ... and we are conducting the exercise as planned.”

Shear did not say exactly when the drill, which is scheduled to run through next week, resumed.

Approximately 50,000 South Korean and 30,000 U.S. troops are taking part in the computerized command-and-control exercise, which the allies insist is defensive in nature. Joint military drills typically prompt anger and threats from the North, which views them as a precursor to war.

But this year’s UFG has been fraught with more tension than those of the past. On Aug. 4, two South Korean soldiers were maimed by land mines while on patrol along the Demilitarized Zone. A U.N. Command investigation determined the mines had been recently planted by North Korean troops, which the North has denied.

South Korea resumed loudspeaker broadcasts of anti-Pyongyang propaganda across the border in response to the incident. North Korea responded with its own broadcasts, and leveled threats of military action against the South if it did not turn off its loudspeakers.

On Thursday, the two Koreas traded fire for the first time in years, with the North lobbing a single shell toward Yeoncheon, a South Korean border town. The South responded by firing dozens of artillery rounds. Pyongyang has threatened military action if the South does not stop its propaganda broadcasts by 5 p.m. Saturday.

Daniel Pinkston of the International Crisis Group — a nonprofit committed to preventing and resolving deadly conflict — said he is very concerned that the exercise was temporarily halted. While he does not have intelligence regarding North Korea’s intentions, he said it means U.N. Command/Combined Forces Command “is turning its attention from executing the exercise to being ready to retaliate against North Korea.”

The U.S. and South Korea suspended the exercise to test the North’s response, said David Garretson, a retired professor of international relations at the University of Maryland University College in Seoul.

“The resumption suggests our evaluation of their response suggests an intention on (North Korea’s) part to cool things, not to escalate,” he said.

J. James Kim, a research fellow at the Asan Institute for Policy Studies in Seoul, said in a paper issued Friday that the exchange of fire on Thursday shows the North worries more about psychological warfare than military action. Analysts believe the North fears the loudspeaker broadcasts will hurt the morale of troops stationed along the DMZ and lead to defections.

“It is important to point out that North Korea’s demand following the initial mortar fire had more to do with the propaganda broadcast than the Ulchi Freedom Guardian,” Kim wrote. “It is also worth noting that North Korea did not respond with a heavier mortar fire after South Korea’s response with a shelling of its own.”

Based on North Korea’s previous negotiating styles and tactics, Kim said he believes the possibility of the North retaliating with military action after its 48-hour deadline passes Saturday evening is low.

“This is especially true given that there are 80,000 U.S. and (South Korean) troops ready and equipped to act should events escalate,” Kim wrote. “However, we cannot completely discount all possibility of military escalation when the deadline passes … If so, South Korea must have a firm, strong, and timely response to signal its resolve that it will not be intimidated.”