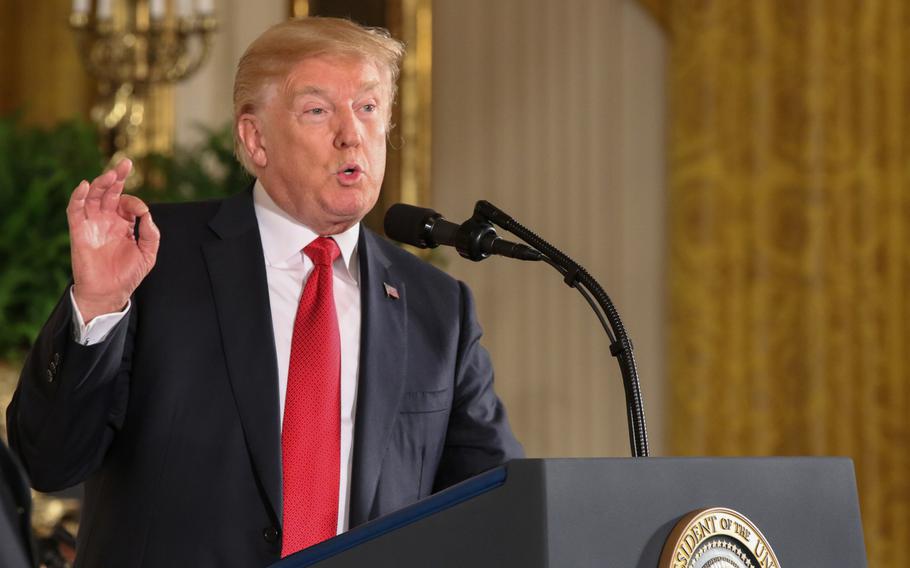 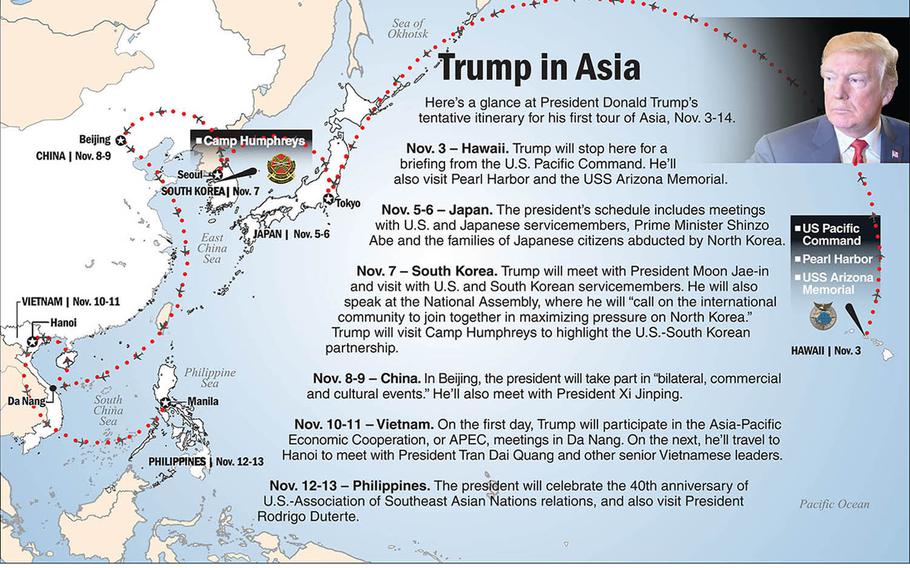 SEOUL, South Korea — President Donald Trump will face fears that rising tensions with North Korea could erupt into conflict and alliance jitters when he makes his first official visit to Asia.

The high-stakes trip begins Friday with a briefing from Pacific Command in Hawaii followed by stops in Japan, South Korea, China, Vietnam and the Philippines.

It comes as regional anxieties are high after months of North Korean missile and nuclear tests as well as saber rattling from Trump himself with a series of tweets and speeches, including a threat to unleash “fire and fury” against the communist state.

The Navy has deployed three aircraft carrier strike groups in the Pacific in a show of force ahead of Trump’s visit, although U.S. military officials have insisted their presence is coincidental.

Underscoring Trump’s unconventional approach to foreign policy, he plans to break with longstanding presidential tradition and skip a highly symbolic visit to the Demilitarized Zone that divides the Korean peninsula. Instead he will visit a U.S. Army garrison south of Seoul.

“I think the best outcome from Trump’s first official visit to the region is that no overt threats are made or no kinetic crisis occurs,” said Catherine Dill, a defense analyst with the California-based Middlebury Institute of International Studies at Monterey.

“Trump should focus on reassuring allies first and foremost,” she said.

Asian leaders will be looking for clarity about Trump’s policies toward the region beyond his tweets. His administration has declared former President Barack Obama’s “pivot” or “rebalancing” to Asia dead but has yet to clearly outline a new approach.

The president has bounced between saying he would be “honored” to meet with North Korea’s leader under the right conditions to threatening unilateral military action.

Southeast Asian nations are especially worried they’ll be overlooked by his “America First” approach and focus on security. China, meanwhile, is poised to fill the vacuum.

“This trip represents an opportunity for the administration to dispel the uncertainty about U.S. engagement that has haunted the region since January,” said David Shear, a former assistant secretary of defense for East Asia. “It’s about time.”

Trump has two major speeches planned — one at South Korea’s National Assembly on Wednesday and the other on Nov. 10 in Vietnam where he’ll participate in the Asia-Pacific Economic Cooperation, or APEC, meetings.

The White House said Trump’s trip “will underscore his commitment to longstanding United States alliances and partnerships, and reaffirm United States leadership in promoting a free and open Indo-Pacific region.”

The question of how to deal with North Korea and trade talks also are expected to top his agenda.

The North test-fired two intercontinental ballistic missiles and sent two other projectiles over the Japanese island of Hokkaido this summer. It also conducted its sixth and most powerful nuclear test on Sept. 3, a major advance toward its goal of developing a nuclear-tipped missile that could reach the U.S. mainland.

Trump has taken a hard line against the North, dubbing leader Kim Jong Un “Little Rocket Man” and warning that he’ll “totally destroy” the country if necessary to defend the U.S. and its allies.

His administration also has pressed for the toughest U.N. Security Council sanctions yet against the North and made inroads in persuading China and other countries to do more to implement the punishing measures.

For its part, North Korea lobbed a fresh salvo in the war of words on Tuesday, with its state-run news agency calling Trump “incurably mentally deranged.”

The North also has upped the ante by threatening to conduct an atmospheric nuclear test over the Pacific Ocean and to fire missiles into the waters near the U.S. territory of Guam.

Despite the rhetoric, the North hasn’t conducted a high-profile provocation since Sept. 15, when it sent a missile soaring over Japan for the second time in less than a month. Experts said it’s too soon to tell if it’s an operational pause or a sign of restraint.

Alexander Vershbow, who was U.S. ambassador to Seoul from 2005-2008, also noted reports that the mountain that covers North Korea’s nuclear testing site was devastated by the latest underground blast.

“So there may be good reasons for the North Koreans to hit the pause button,” he said Wednesday in a conference call organized by the Atlantic Council, a Washington, D.C.-based think tank.

Advocates of resuming long-stalled dialogue with Pyongyang have urged the isolated regime to put its weapons program on hold even if it refuses to abandon its efforts altogether.

China, which wields leverage as North Korea’s main economic lifeline, has proposed a so-called freeze-for-a-freeze in which the North would halt its tests and the U.S. would stop or scale back joint military exercises with the South.

Both adversaries have dismissed that idea and Trump recently called efforts to negotiate with the North a waste of time.

However, Reuters reported earlier this week that the U.S. is quietly pursuing direct diplomacy with the North. The news agency quoted a senior State Department official as saying U.S. envoy Joseph Yun has been in contact with diplomat at Pyongyang’s U.N. mission to urge the communist state to “stop testing” nuclear bombs and missiles among other points.

Experts said Trump and Chinese counterpart Xi Jinping are likely to put on a show of friendship despite simmering disputes over North Korea and Beijing’s claims to the South China Sea.

Cracks in the alliance

Trump’s visit to South Korea also will be closely watched for signs of cracks in the nearly seven-decade alliance amid increasing concern on the peninsula that Seoul is being sidelined in important decisions.

Trump still has not named a new U.S. ambassador to Seoul more than nine months since taking office.

The Republican leader also has called for a renegotiation of the 5-year-old Free Trade Agreement between the two countries, calling it a “job killer.” Seoul insists the deal has minimized the deficit and wants a joint review of its impact on the two economies.

South Korea’s President Moon Jae-in favors engagement with the North and insisted that no military action be taken without his approval.

He also wants changes in the joint military structure to expedite the transfer of wartime operational control of South Korean forces from the U.S. to his government.

While the two leaders are likely to utter the usual slogans reinforcing their “ironclad commitment” to the alliance, their relationship has been on shaky ground since both took office earlier this year.

“It is most important for Trump to make clear that the U.S. will not use its military options without agreement from South Korea’s government,” said Cheong Seong-chang, an analyst with the Sejong Institute near Seoul.

Officials said Trump decided not to visit the DMZ because of time constraints, opting instead to visit Camp Humphreys, a newly expanded base that is to become home to the bulk of U.S. Forces Korea under a long-delayed relocation plan.

Every president since Ronald Reagan, with the exception of George H.W. Bush, has stared into North Korea from the buffer zone, which is just 35 miles north of Seoul.

Of course he may change his mind and military officials said a contingency plan was being prepared in case he does so.

Trump will make the 11-day trip amid a furor at home over the investigation into Russian interference in his presidential campaign.

“We’ve got a pretty cloudy domestic situation here,” Shear said. “And believe me the region has been watching this.”