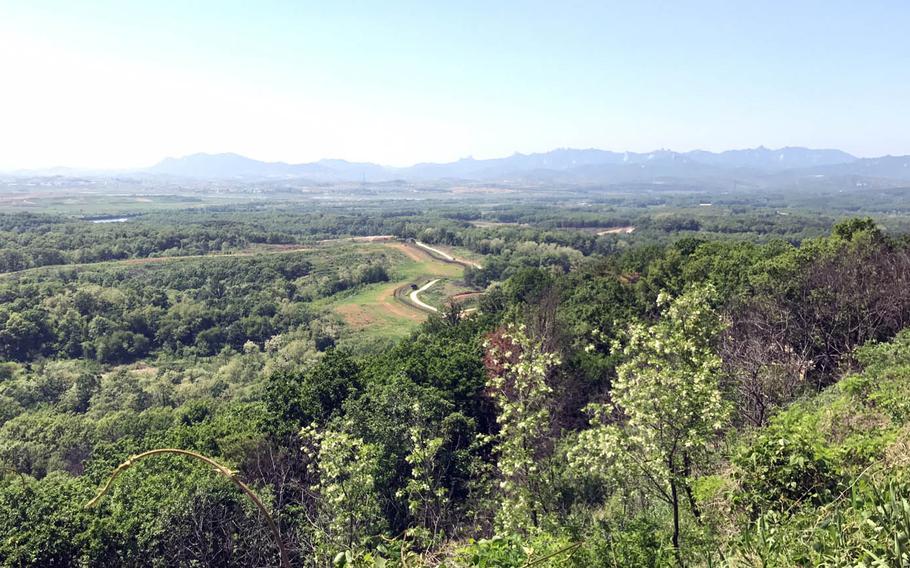 The Demilitarized Zone between South Korea, foreground, and North Korea, rear, is 160 miles long, more than 2 miles wide, and dotted with landmines. (Aaron Kidd/Stars and Stripes)

SEOUL, South Korea — A North Korean soldier defected to the South on Tuesday after crossing the heavily fortified border that divides the two countries, the defense ministry said.

It was the second defection via the Demilitarized Zone in less than a year. It’s a dangerous journey as the area, which is about 160 miles long and 2 ½ miles wide, is dotted with landmines.

“A North Korean soldier crossed the Military Demarcation Line in the middle sector of the DMZ and said he wanted to defect,” said a ministry official, speaking on condition of anonymity in accordance with department policies.

The soldier is being questioned to find out what caused him to flee to South Korea and how he made it over, the official said, adding no gunfire was exchanged.

While South Korean officials have reported an increase in the number of overall defections from the North, military defections remain relatively rare.

Another North Korean soldier defected across the DMZ last September. In all, only five to 10 North Koreans have used that route to cross to the South since 2010, according to the Yonhap news agency.

The two Koreas have been divided by the DMZ since the 1950-53 war ended with an armistice instead of a peace treaty. About 28,500 U.S. servicemembers are stationed in South Korea.