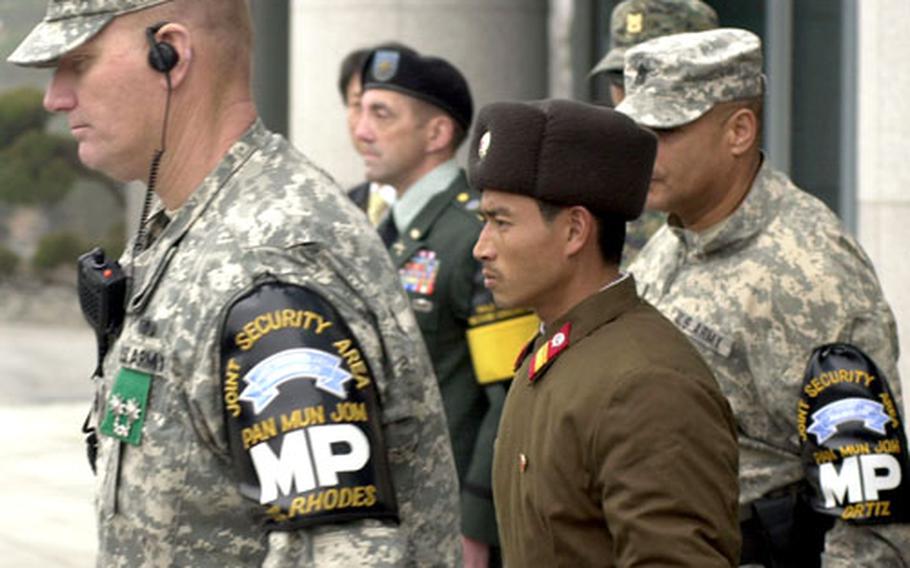 A North Korean Army sergeant is escorted back to the Military Demarcation Line by U.S. and South Korean military officials during a repatriation ceremony Wednesday at Korea&#39;s Demilitarized Zone. (Jon Rabiroff / S&S)

DEMILITARIZED ZONE, Korea &#8212; To call it a happy homecoming would be a stretch.

But a stone-faced North Korean army sergeant &#8212; rescued Sunday after his small fishing boat floated into South Korean waters &#8212; was escorted Wednesday by U.S. and South Korean military officials back to the Military Demarcation Line dividing the two Koreas.

There, he was released to a waiting group of equally businesslike officials from the Korean People&#8217;s Army. The sergeant, whose name was not released, was then left to walk by himself several steps behind an officer who led him up the stairs and into the Panmungak, North Korea&#8217;s main building at the DMZ&#8217;s Joint Security Area.

Officials said the sergeant was only allowed to return to North Korea during Wednesday&#8217;s repatriation after members of the United Nations Command Military Armistice Commission and Neutral Nations Supervisory Commission interviewed him.

They were satisfied the soldier had been fishing, and he was not spying on any other military mission when the South Korean navy found his boat floating Sunday afternoon in the Yellow Sea, a mile northwest of Yeonpyeong Island, according to reports. They also believed him when he said he wanted to return north.

The repatriation is the latest example of the complex and ever-changing relationship between the two Koreas, which technically remain at war since an armistice halted Korean War hostilities in 1953.

Over the summer, North Korea made international headlines with nuclear and missile tests and related threats to its enemies.

Then, last month, tensions between the two countries heated up again when their navies exchanged gunfire.

South Korean military officials said a North Korean patrol boat crossed the border, and that a North Korean officer was killed and three others were injured during the skirmish.

U.S. and South Korean military officials routinely repatriate the remains of one or two North Koreans each year who drown and whose bodies float south. The last time there was an event like Wednesday&#8217;s was in 2006, when two North Korean soldiers suffering from hypothermia were repatriated after being rescued from a small boat.