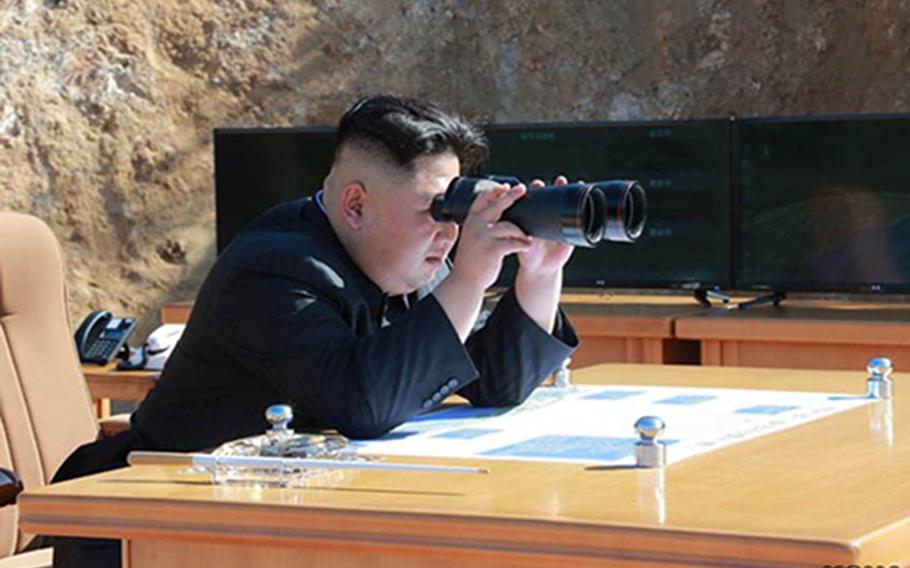 North Korea, meanwhile, threatened to strike “the heart of the U.S. with our powerful nuclear hammer” if the Americans try to provoke a regime change in Pyongyang, according to the state-run Korean Central News Agency.

The Washington Post reported that the Pentagon’s Defense Intelligence Agency has concluded that the North will be able to field a reliable, nuclear-capable intercontinental ballistic missile as early as next year, a more rapid timeline than has been forecast.

The officials, who were familiar with the confidential DIA assessment, told the newspaper that North Korea has been able to validate its basic designs with an increased pace of testing in recent months, putting it within a few months of starting industrial production.

The findings came amid fears that the North was readying to conduct another missile test in connection with Thursday’s planned commemorations of the armistice that was signed on July 27, 1953. Pyongyang often times its launches to coincide with high-profile events.

South Korea’s military said it was maintaining readiness and monitoring the situation.

The agreement signed in the truce village of Panmunjom ended the fighting that pitted the U.S.-backed South against the Soviet and Chinese-backed North, but the sides remained technically at war after failing to reach a peace treaty.

North Korea upped the ante on July 4 when it test-fired an ICBM that experts said demonstrated a range that would put it in reach of Alaska.

That capped an unprecedented number of missile launches and two underground nuclear tests since January 2016 despite tightened U.N. economic sanctions and diplomatic pressure.

Joseph Dunford, the chairman of the Joint Chiefs of Staff, warned that North Korea is capable of “a limited missile attack” but insisted the United States was prepared to defend against it.

“They’re clearly on a path to develop an intercontinental ballistic missile that can reach the United States and to match that with a nuclear weapon,” he said over the weekend at the Aspen Security Forum in Colorado.

Dunford didn’t rule out military options but said the consequences would be “horrific” and the best approach is to support Secretary of State Rex Tillerson’s efforts to tighten the economic noose on North Korea.

That pressure should cause North Korea to initially freeze, then cap their nuclear weapons capabilities and eventually denuclearize, he added.

“Ideally we will decnuclearize the … Korean peninsula with economic and political means,” he said. “But in the meantime I can assure the American people that our job is to develop military options in the event that that fails and be prepared to mitigate some of the consequences.”

President Donald Trump’s administration has sent U.S. warships and bombers to the region. It also has moved to tighten sanctions even further and to persuade China and other countries to do more to prevent violations of the punishing measures.

Tillerson has said in the past that North Korean regime change was not on the U.S. agenda.

But CIA Director Mike Pompeo appeared to suggest that could change when he said at the Aspen Security Forum last week that it was important to separate North Korean leader Kim Jong Un from the isolated country’s nuclear weapons stockpile.

Experts agree the Kim family dynasty’s No. 1 priority is to maintain power, and the North reacted accordingly.

“Should the U.S. dare to show even the slightest sign of attempt to remove our supreme leadership, we will strike a merciless blow at the heart of the U.S. with our powerful nuclear hammer, honed and hardened over time,” KCNA said Tuesday, quoting an unnamed foreign ministry spokesman.

South Korea, meanwhile, held out hope that the North would respond to its proposal for new talks aimed at easing tensions and resuming reunions for families that were split by the war.

“North Korea has not yet given any response. The government will be waiting for their response calmly,” Unification Ministry spokesman Baik Tae-hyun said at a press briefing on Wednesday. “The government will keep pursuing a peaceful Korean Peninsula without nuclear weapons and war.”