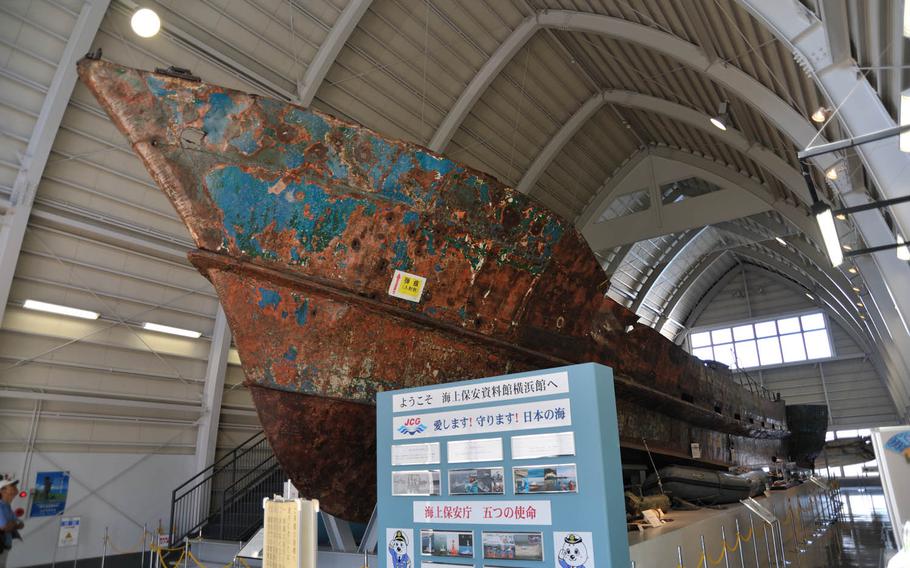 The centerpiece of the Japan Coast Guard Museum in Yokohama is a North Korean spy ship that was taken in December 2001 after a firefight in the East China Sea. North Korea has been known to disguise spy ships as commercial fishing vessels. (Courtesy of the Japan coast guard)

Writing printed on the hulls and the boats’ primitive character indicate they come from North Korea.

Whether the dead were defectors, stranded fishermen, spies or something else continues to be as much of a mystery as most of what comes out of one of the world’s most closed-off nations.

Nine ships and parts of two others, along with 21 bodies, have washed up during the past two months along a roughly 430-mile stretch of coastline, according to Japanese coast guard officials and media reports.

Abandoned ships washing ashore aren’t especially uncommon – 65 were found last year and 80 the year before, the coast guard told Stars and Stripes. However, the groups of ships landing so closely together and the state of some of the bodies — two of which were missing heads, per media reports — are raising questions about what may be happening in North Korea.

Some have suggested the ships were part of a coordinated defection, but Kim Jin Moo, a senior researcher from the Korea Institute for Defense Analyses in Seoul, strongly doubts it.

“They don’t seem to have gathered together and have been saying ‘Let’s [flee] by ship,’ ” Kim said.

North Korea’s State Security Department has infiltrated society with informers on such a vast scale that it makes group defections unlikely, Kim said. However, it’s difficult to tell what happened without knowing more about the victims, he added.

Some of the bodies were so decomposed that investigators were unable to tell genders or ages at first glance, coast guard officials said.

Several ships carried fishing equipment, though North Korea has been known to disguise spy ships as commercial vessels. A Yokohama coast guard museum has one such North Korean ship on display; however, it appears more sophisticated than those that have washed ashore.

One of the recently found ships is marked with the Korean characters for “Korean People’s Army,” but that doesn’t necessarily signify a combat role in North Korea, where the army has been reportedly tasked with farming, fishing and other typically civilian jobs.

Another ship appears to show markings from one of North Korea’s “fishing business offices,” Kim said.

If accurate, that detail could provide a glimpse into North Korea’s economic situation.

One of Pyongyang’s largest sources of income is from coal sales to China, Kim said. North Korean coal imports rose during the first half of 2015, according to China Customs data.

However, China is also looking for ways to cut very unhealthy levels of pollution in its cities. That could leave the North scrambling for foreign currency.

The Workers’ Party of Korea and other political offices run fishing business offices to, in part, gain hard currency through fish and crab sales to China, Kim said.

If ordered to go to sea by those offices, fishermen would do so — even in ships lacking fuel, Kim said.