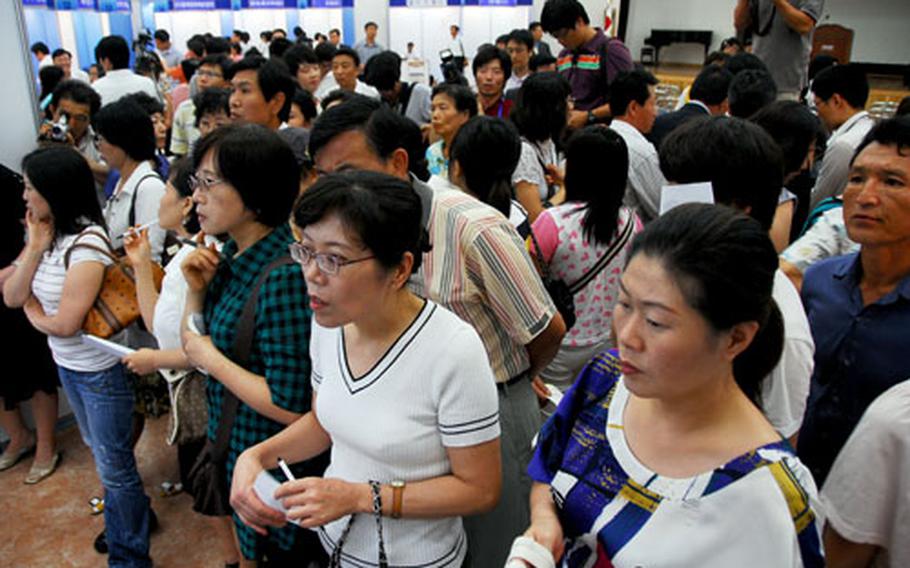 North Korean defectors gather around a job board at a recent job fair in Seoul. About 100 defectors and twenty-four companies attended the fair. Many North Koreans have difficultly finding jobs and assimilating into life in South Korea after escaping the North. (Ashley Rowland / S&S)

North Korean defectors gather around a job board at a recent job fair in Seoul. About 100 defectors and twenty-four companies attended the fair. Many North Koreans have difficultly finding jobs and assimilating into life in South Korea after escaping the North. (Ashley Rowland / S&S) 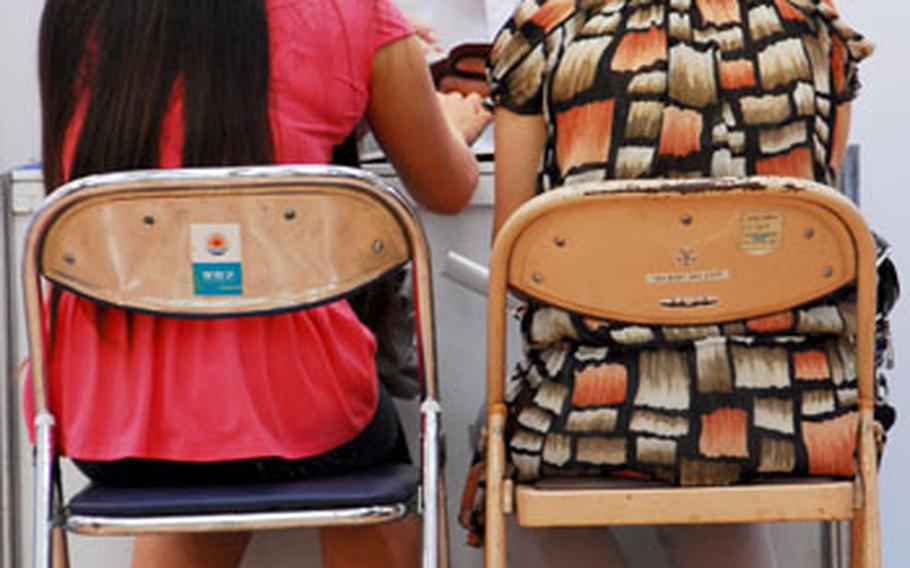 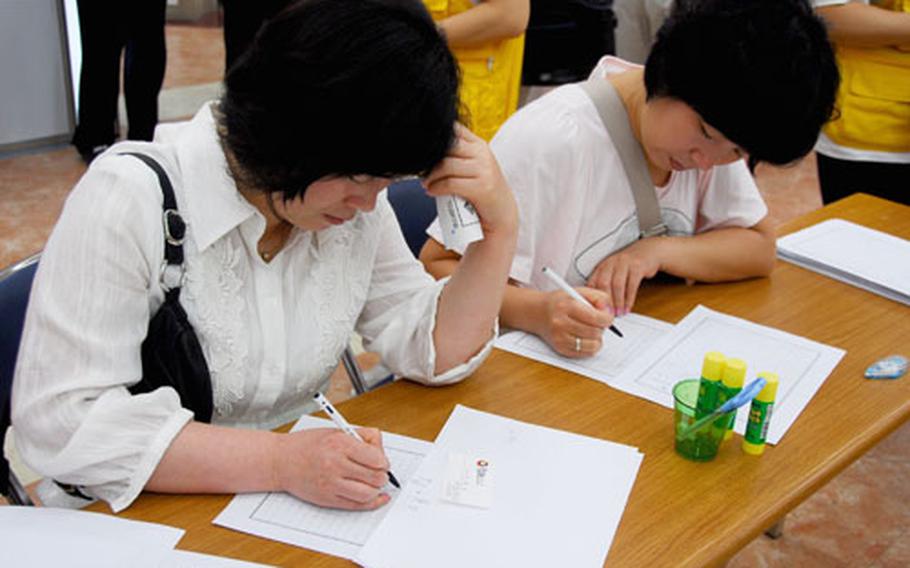 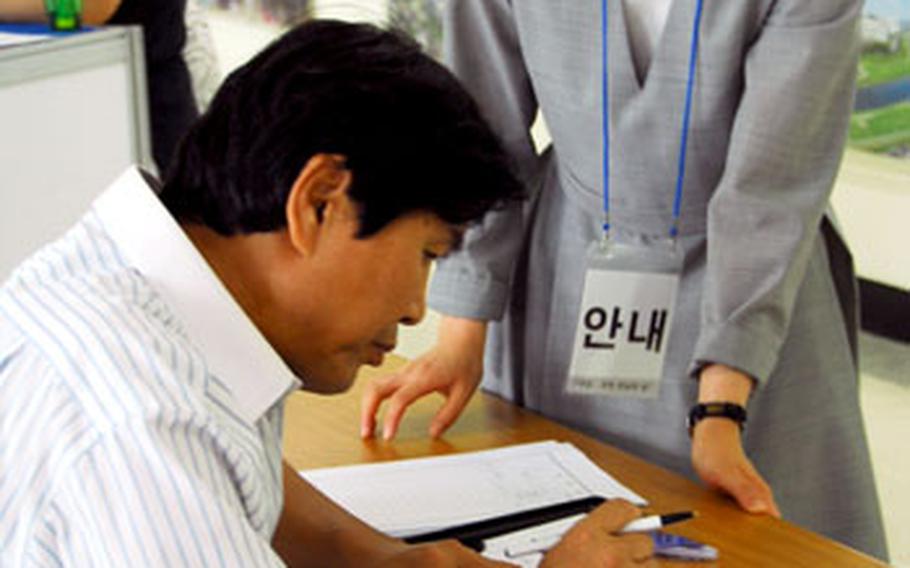 Kim Sung-il fills out a resume with the help of a nun at a job fair for North Korean defectors this month. Kim, who served in the North Korean army for 18 years, said he left the country with his family because he disliked dictator Kim Jong Il and was tired of watching his soldiers starve to death. (Ashley Rowland / S&S)

SEOUL &#8212; To his friends, Jang Yong-cheon is a soft-spoken but typical 24-year-old with a trendy boy-band haircut and faded jeans.

What they don&#8217;t know is that he grew up in North Korea, or that he escaped to China at age 7 with his older sister after his parents were arrested for black-marketing. Nor do they know he fled to Seoul just four years ago, and that he speaks quietly so his friends won&#8217;t hear the North Korean accent he still struggles to get rid of.

For most of the more than 15,000 defectors living in South Korea, life is difficult. Like Jang, they often feel like outsiders, lagging behind their South Korean counterparts in education and job skills. Even their speech is different from South Koreans, who have incorporated hundreds of English words into their language.

Nearly 90 percent of defectors remain unemployed or work as day laborers after they arrive in the South, according to the Ministry of Reunification.

Jang was one of about 100 people who attended a recent job fair in Seoul for North Korean defectors, the first of what officials say will be monthly events for those who have escaped the repressive communist nation.

&#8220;Many of them have lived their whole lives in North Korea, working on the farm or in simple labor jobs. They can&#8217;t get a good job here,&#8221; said Kim Ji-won of the Ministry of Reunification, which organized the job fair.

The ministry is helping the defectors improve their interviewing skills and is providing career counseling after they land jobs. The government will pay half of their salaries for one year if they are hired through the job fair, Kim said.

South Koreans themselves have mixed feelings toward the defectors, who share a common language and physical features but little else.

Kim said some South Koreans resent the newcomers and say the government should spend its tax revenue to help poor South Koreans before they spend it to house and educate defectors &#8212; a task that cost $38 million this year, up from $31.8 million the previous year. Another group says South Korea should help the defectors simply because they are Korean.

Kim believes helping the defectors assimilate is critical because they will be the crucial link between the divided Koreas if they ever reunify.

&#8220;Based on our experience in helping them, we will be able to project and plan on how to deal with the North Koreans after reunification,&#8221; he said.

After they arrive in the South, defectors stay for three months in Hanawon, a government resettlement center several hours south of Seoul. There, they get counseling and medical treatment, and attend classes in everything from South Korea&#8217;s political system to how to use the bank.

Afterward, they move into government-run apartments in a South Korean city of their choosing and receive a one-time government stipend of 6,000,000 won &#8212; currently about $4,800 &#8212; for living expenses.

Most of the two dozen companies at the job fair offered low-wage labor or manufacturing jobs &#8212; not the kind of work that appeals to a South Korean work force that is increasingly highly educated, computer savvy and proficient in foreign languages.

None of the jobs were what Jang hoped to find. But he needed any job he could get to save money and help his parents escape North Korea.

One defector, who asked that her name not be used because she feared for her family in North Korea, said she wanted an office job, not one of the repetitive manufacturing jobs being touted at the job fair.

The woman, a pretty 26-year-old who arrived at the job fair in jeans and dangling earrings, said she grew up watching smuggled DVDs of South Korean television dramas that showed rich people living in glamorous houses and wearing expensive clothes.

But life here is harder than she expected, with stiff competition for jobs and daily conversation that is peppered with different accents and words she doesn&#8217;t know.

&#8220;Even counting from one to 10 is strange,&#8221; said the woman, who hopes to graduate from a business school in six months and land an office accounting job.

Jang Kap-dong, a recruiter for a manufacturing company, had never met a North Korean before the job fair. But after interviewing a half-dozen defectors for simple assembly-line work, he said they weren&#8217;t prepared for the job market, much less the reality of life in South Korea.

Jang Kap-dong said one man who claimed to have an engineering degree from a North Korean university couldn&#8217;t identify simple machine parts. He estimated he had less than a South Korean middle-school education.

Recruiter Song Young-gwon was peddling sewing jobs usually shunned by young South Koreans. Most of his company&#8217;s employees are poor immigrants or South Korean women in their 50s.

&#8220;We are suffering from a labor shortage,&#8221; said Song, who hoped to hire three or four defectors to work as dress-making assistants. He said the seven defectors he interviewed were enthusiastic about the job, where they could earn about 1 million won &#8212; about $800 &#8212; a month.

Kim Sung-il, a former major in the North Korean army, hoped to get a job as a security guard at E-Mart, a store similar to Wal-Mart.

Kim said he and his family had a good life in North Korea, but decided to leave as he watched more of his soldiers starve and die during his 18 years in the military.

At first, they regretted their decision. Kim, 52, has struggled to find and keep jobs, and South Koreans look down on them because they speak with North Korean accents.

His opinion changed after one of his sons was admitted into a prestigious South Korean university.

Kim Young-soon, 46, said she constantly feels sick from internal injuries she suffered during her escape through China and Thailand just over a year ago. The best thing about her new life is that nobody is trying to control it.

But she learned that life in Seoul depends on having a job.