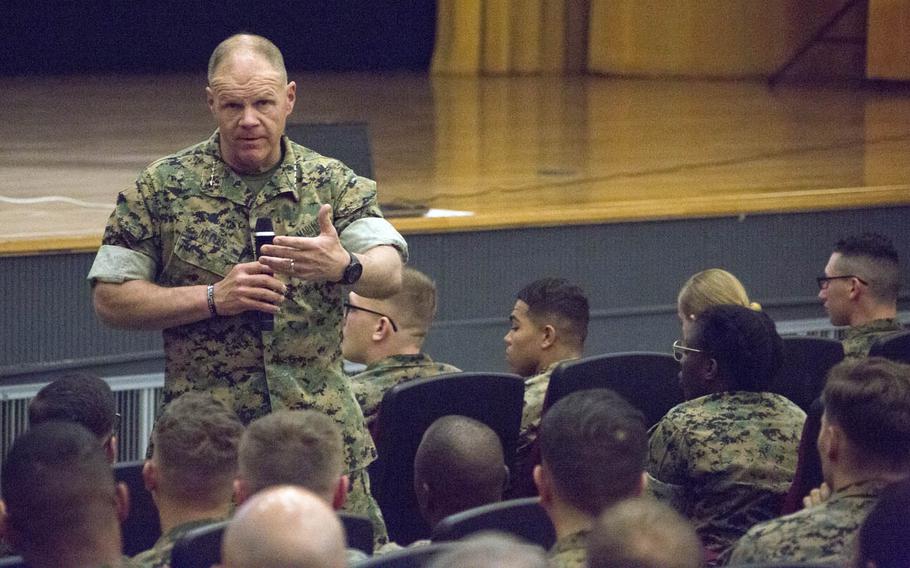 The commandant of the Marine Corps suggested that the United States may reconsider the timeframe for relocating troops from Okinawa to Guam because of North Korea’s growing missile threat.

“The situation, strategically and operationally, as you’ve seen in the news recently, has changed,” Gen. Robert Neller told the Senate Appropriations Committee in response to a question about problems with the relocation plan. “The capabilities of our adversaries have changed the dynamic there.”

Neller did not mention North Korea by name, but the rogue regime has stepped up its testing of ballistic missiles, already firing nearly a dozen this year, menacing Japan and South Korea.

Neller was adamant that Marines would ultimately relocate to Guam, but he acknowledged there were still environmental issues on the island and infrastructure issues that need to be overcome.

“So bottom line is, somebody’s going to go to Guam,” he said during Wednesday’s hearing. “But the Marine Corps has always said that wherever we go, we have to be able to train and maintain the readiness of the force that’s there.”

Washington and Tokyo have been under political pressure for years to reduce the number of Marines stationed at Marine Corps Air Station Futenma, Okinawa, from which fixed-wing aircraft, helicopters and tilt-rotor Ospreys support the III Marine Expeditionary Force.

While 4,000 Marines are tentatively slated to move to Guam during the first half of the next decade, Futenma aviation operations are expected to relocate to the northern part of Okinawa. A new runway is being built at Camp Schwab, although that planned move has met strong local protests.

Neller said Adm. Harry Harris, head of U.S. Pacific Command, “has looked at different options for where they might, at least temporarily, base aircraft because of the evolving threat.”

Defense Secretary Jim Mattis, the Joint Chiefs of Staff and Marine Corps were “at the very beginning of taking a look at this,” he said.

The Navy’s plan to construct live-fire ranges for Marine training on the islands of Tinian and Pagan in the Northern Mariana Islands has been held up over a federal lawsuit concerning environmental protection.

Neller said it would be a “problem” if the lawsuit ultimately killed the firing range plan for Guam Marines.

“For the time being, we’re committed to the plan,” he said of the overall relocation. “But I share your concerns about being able to move the force, be operationally relevant, make sure the force is safe, that it’s not at risk, and it is also able to train.”