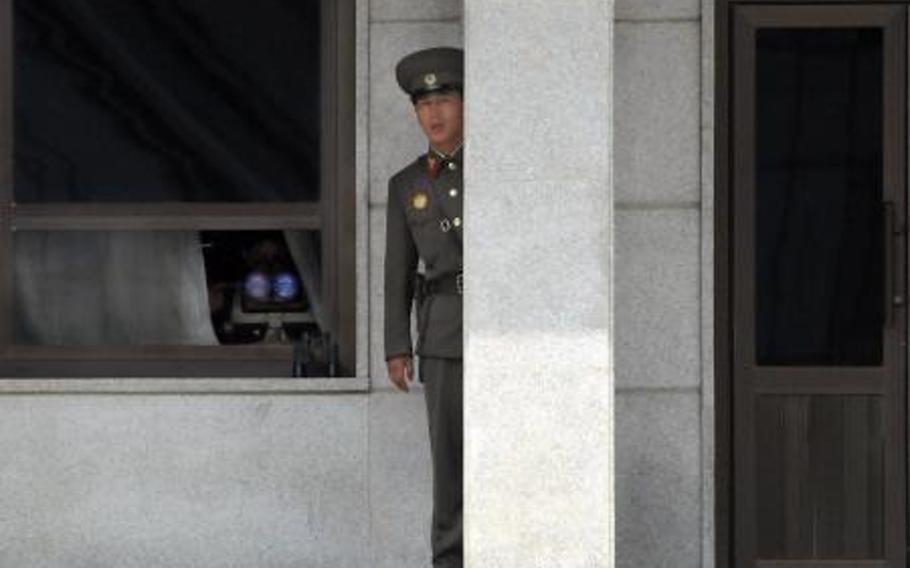 A North Korean guard peers out from behind a granite pillar in to observe U.S. servicemembers during a tour of the Korean Demilitarized Zone in July 2008. North Korea is finding it harder to keep information from its people, U.S. special envoy Ambassador Robert King said Thursday. (Spike Call/DVIDS)

A North Korean guard peers out from behind a granite pillar in to observe U.S. servicemembers during a tour of the Korean Demilitarized Zone in July 2008. North Korea is finding it harder to keep information from its people, U.S. special envoy Ambassador Robert King said Thursday. (Spike Call/DVIDS) 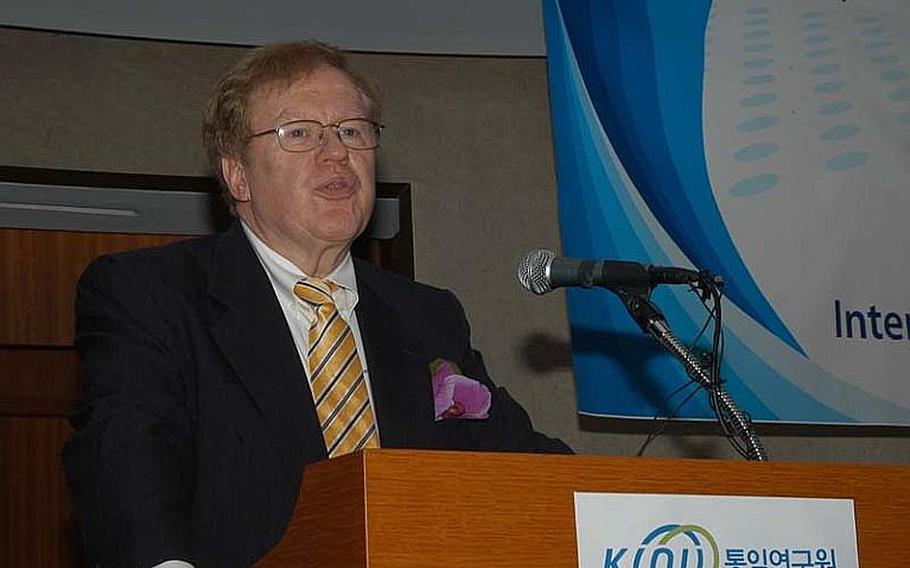 Robert King, the U.S. special envoy for North Korean human rights issues, speaks Thursday to a gathering of experts on human rights at a conference in Seoul. He said a key to addressing human rights abuses in North Korea is "breaking down the information blockade" the government there has put between its people and the outside world. (Jon Rabiroff/Stars and Stripes)

SEOUL &mdash; North Korea&rsquo;s acknowledgment that its April attempt to launch a satellite has failed was a milestone of sorts in the fight for human rights there, according to the U.S. special envoy.

Despite a variety of obstacles in place, it appears even the government of the hermit kingdom is aware news and information from the outside world is finding its way to the people of North Korea, Ambassador Robert King said in delivering the keynote address Thursday at an international gathering of human rights experts.

That, he said, is why the North took the unusual step of announcing to its citizens a couple of months ago, &ldquo;that the satellite was at the bottom of the Yellow Sea &hellip; because of the concern that the people would (already) know.&rdquo;

&ldquo;I still believe that the power of broadcasting can make a difference in breaking down the information blockade that is the key to positive change in North Korea,&rdquo; King said.

When missile tests failed in years past, the North lied and called them successful.

&ldquo;I think the difference reflects the effect of information getting into North Korea and the constraints that places on the government and what it can say to its own people.&rdquo;

King, the U.S. special envoy for North Korean human rights issues, made his remarks at a crowd of more than 100 people at the 2nd Korea Institute for National Unification-Chaillot Human Rights Forum 2012, which was alternately titled, &ldquo;International Cooperation to Improve North Korean Human Rights Conditions Under the Kim Jong Un Regime.&rdquo;

A recent U.S. State Department report said that human rights conditions in North Korea remain &ldquo;very poor,&rdquo; with the lives of residents strictly controlled in part by the threat of being sent to one of a number of political prison camps where conditions are deplorable.

Amnesty International, in another recent report, estimated that as many as 200,000 people are now forced to live in the camps.

The North has denied any human rights abuses, suggesting the allegations are just U.S. propaganda.

At Thursday&rsquo;s forum, Kim Chun-sik, the vice minister for South Korea&rsquo;s Ministry of Unification, suggested that thanks in part to Kim Jong Un taking over in the wake of the December death of his father, Kim Jong Il, &ldquo;North Korea is at a crossroads now for &hellip; change.&rdquo;

Anne Mary Campbell &ndash; a representative in South Korea for the office of the United Nations High Commissioner for Refugees &ndash; said some may wonder why human rights should be a priority with so many other problems facing North Korea and the Korean peninsula.

However, she said, the world needs &ldquo;visionaries &hellip; (and) people who dare to hope.&rdquo;

King said that despite the fact that human rights abuses appear to be worse in North Korea today than they were in the Soviet Union decades ago, there is &ldquo;less of an outcry today about political prisons and repression&rdquo; there because the North is &ldquo;still succeeding in controlling information flowing into, and out of&rdquo; the country.

&ldquo;North Korea remains the most extreme example of isolation,&rdquo; he said, with Internet access, cell phone communication and radio use either prohibited or severely restricted.

But the United States remains committed to increasing information to North Korea, he said.

&ldquo;This is a fundamental component of our commitment to improving human rights in North Korea,&rdquo; he said. &ldquo;Ultimately, a more open information environment contributes to a more conscious North Korean (citizenry).&rdquo;

King said he once worked with Radio Free Europe when Central Europe was under Soviet domination, &ldquo;and I saw first-hand the importance of international broadcasting in promoting human rights and openness and information in countries whose leaders sought to shut them off from the outside world.&rdquo;

So, he said, &ldquo;The United States broadcasts news and other information into North Korea in an effort to break down the isolation of the people there.

&ldquo;Our country was founded on fundamental principles of human rights, and our support for these rights is an important part of what defines the American people,&rdquo; he said.

King concluded by saying, &ldquo;(North Korea) must demonstrate respect for human rights in order for it to participate fully in the international community, and we urge it to do so.&rdquo;