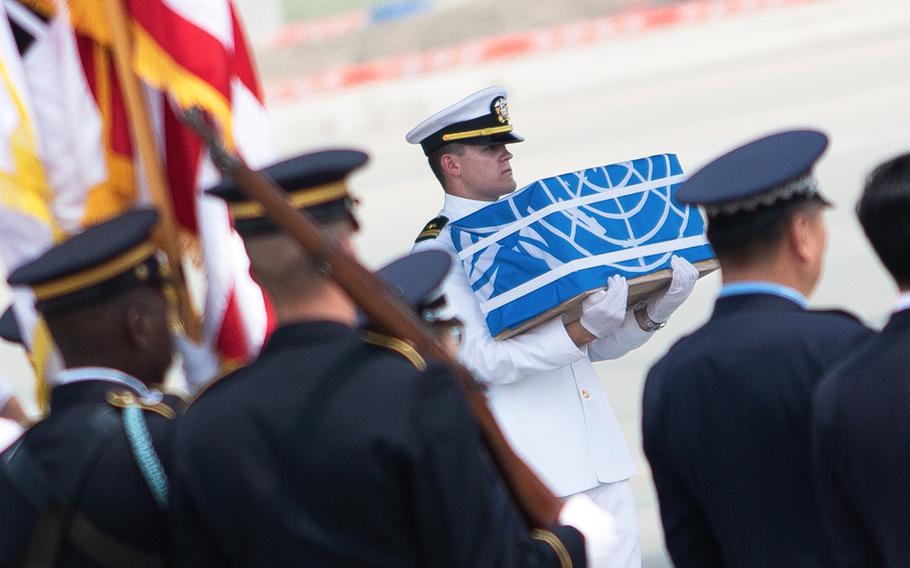 The first of 55 cases of remains repatriated from North Korea is carried off a plane at Osan Air Base, South Korea, Friday, July 27, 2018. (Marcus Fichtl/Stars and Stripes)

SEOUL, South Korea — The U.S. military plans to hold a ceremony Wednesday to honor the 55 cases of human remains handed over by North Korea last week. But it’s likely to be a long time before the identities of those inside can be verified.

North Korea’s decision to allow the United States to send a cargo plane to collect the remains on Friday partially fulfilled a promise its leader made during his June 12 summit with President Donald Trump.

Trump hailed it as “a great moment for so many families” and thanked Kim Jong Un.

The next step will be to send the remains to a military lab in Hawaii where they will undergo a lengthy forensics process as part of one of America’s most extensive cold cases.

U.S. officials also are eager to resume searches in North Korea for more remains, an effort that has been stalled for more than a decade due to rising nuclear tensions.

More than 7,600 American servicemembers remain missing from the 1950-53 Korean War, which ended in an armistice instead of a peace treaty. Some 5,300 of those are believed to have been lost in North Korea, which is separated from the South by one of the world’s most fortified borders.

"Just over 1,000 men are unrecovered" from the so-called Demilitarized Zone and nearby buffer zones, according to the Defense POW/MIA Accounting Agency, or DPAA.

Gen. Vincent Brooks, commander of U.S. Forces Korea and United Nations Command, will host a full honors ceremony on Wednesday for the remains, which were flown to Osan Air Base. 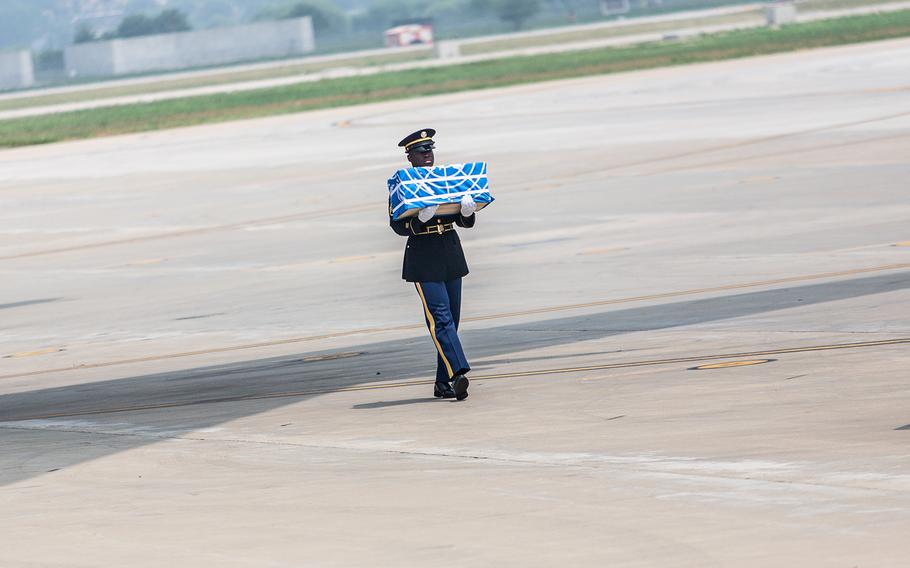 “Immediately following that ceremony, the remains will be flown to Hawaii for further processing under the Defense POW/MIA Accounting Agency,” the UNC said Friday.

Once in Hawaii, staff at the DPAA laboratory, which bills itself as the “largest and most diverse skeletal identification laboratory in the world,” will use a variety of methods to try to identify the remains.

Forensic anthropologists will try to develop a biological profile, including sex, race, height and age at death. They’ll also look at the condition of bones for hints of trauma and medical conditions as well as other clues.

Also valuable will be any bits of clothing, dog tags or other personal effects returned with the remains.

But past remains have been found to be mixed up with other unidentified individuals and in at least one case animal bones. DNA samples must be sent for analysis to a separate lab at Dover Air Force Base, Del.

Dental evidence and chest radiograph comparisons are other important indicators.

Hoffman said the military has a database of X-ray images of rib cages of thousands of American servicemembers.

“The clavicle is actually as unique as your fingerprint,” he said in an email.

“No loss is resolved by one single piece of evidence,” he added. “Identifications are made based upon multiple lines of evidence - both scientific and historical.”

Meanwhile, the boxes holding the remains returned Friday were draped in blue U.N. flags as 15 other nations fought under the banner with the United States during the war.

Some cases have taken decades to resolve. As recently as last month, a South Korean soldier whose remains were found by search teams in North Korea in 2001 was finally returned home.

The DPAA has received about 630 sets of remains from unilateral turnovers and field recovery missions, Hoffman said, adding that “not all were American remains.”

So far, 339 identifications have been made, “approximately 80 percent of what we believe to be American from those sources,” he said.

The White House is looking forward to resuming field operations, another agreement stemming from the summit and seen as an important goodwill gesture from the North amid more difficult negotiations over dismantling its nuclear weapons program.

“Today, the Chairman is fulfilling part of the commitment he made to the President to return our fallen American service members,” the White House said in a statement. “We are encouraged by North Korea’s actions and the momentum for positive change.”

Stars and Stripes correspondent Marcus Fichtl contributed to this report.