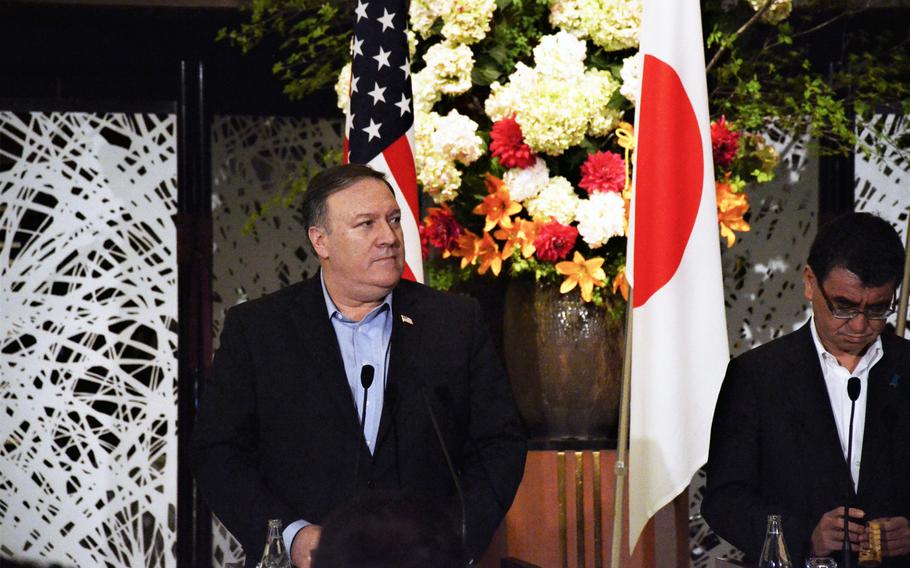 U.S. Secretary of State Mike Pompeo stands at a news conference at Japan's Ministry for Foreign Affairs, where he and his Japanese and South Korean counterparts discussed his recent talks with North Korean leaders in Pyongyang. (Caitlin Doornbos)

Instead he came away with agreements to talk more and an angry denunciation from the North, which accused the Americans of making “gangster-like” demands for unilateral disarmament.

A month after President Donald Trump shook hands with North Korean leader Kim Jong Un in Singapore, the harsh rhetoric was a signal that the honeymoon is over as the two sides appear no closer to agreement on concrete measures, a timeline or even a definition of denuclearization.

The North Koreans also have yet to return the remains of U.S. troops killed in the 1950-53 Korean War, which was the one specific promise made in the four-point summit declaration.

Pompeo dismissed the stinging North Korean commentary and insisted that he made progress during his talks Friday and Saturday.

“If those requests were gangster-like, the world is a gangster,” Pompeo said Sunday after meeting with his South Korean and Japanese counterparts in Tokyo. He was referring to the fact that U.N. Security Council resolutions have banned the North from conducting nuclear and missile activities.

“People are going to make stray comments after meetings,” Pompeo said. “If I paid attention to the press, I’d go nuts.”

Trump himself sought to put the best face possible on the state of the bargaining with North Korea. He said in a tweet Monday that he was confident that Kim would “honor the contract we signed” in Singapore.

“We agreed to the denuclearization of North Korea. China, on the other hand, may be exerting negative pressure on a deal because of our posture on Chinese Trade-Hope Not!,” Trump added, in what could be a bid to shift the blame away from the North Koreans and onto China.

The North Korean statement, published by the government mouthpiece Korean Central News Agency, carefully focused its criticism on the talks with Pompeo and avoided an attack on President Donald Trump, who has placed great importance on his personal relationship with North Korean leader Kim Jong Un since their meeting in Singapore.

Vipin Narang, an associate professor at the Massachusetts Institute of Technology, said the North Koreans were signaling that they have no plans to give up their nuclear arsenal without major concessions.

“This is not the end of the process. It’s a negotiating tactic,” he wrote on Twitter.

The United States maintains some 28,500 servicemembers in South Korea, which remains technically at war with the North after the three-year conflict ended in an armistice instead of a peace treaty.

Past nuclear negotiations with North have failed due to disputes over verification measures and distrust on both sides.

“This is standard operating procedure for three generations now of dictators in North Korea,” Sen. Roy Blunt said Sunday in an interview on NBC’s “Meet the Press.” “Nobody should be surprised by foot dragging.”

The Missouri Republican also said he thought it was a “mistake to give the military exercises up” and the administration may “have to reconsider that I would think at some future time particularly if these negotiations appear to be going on for a long time.”

Pompeo said the two sides had discussed “modalities” for the destruction of a missile engine testing facility and agreed to form a working group to determine how to verify North Korea’s denuclearization.

Pentagon officials also plan to meet with North Koreans Thursday to discuss the return of remains of war dead, he said.

The secretary of state acknowledged that “the road ahead will be difficult and challenging” and vowed to keep punishing economic sanctions in place “until final fully verified denuclearization” is achieved.

Unlike his previous two trips to North Korea, which were made before the summit, Pompeo didn’t meet with Kim Jong Un.

Critics say the Trump administration already has weakened its hand against a team of seasoned North Korean negotiators by agreeing to the unprecedented summit, which has been a longtime goal in Pyongyang, and by suspending joint military exercises with South Korea that are hated by the North.

The North has stopped conducting nuclear and missile tests that had become a near weekly occurrence during rising tensions last year. It also destroyed its main nuclear testing site, where it conducted its sixth and most powerful underground nuclear explosion in September.

But a series of recent reports based on U.S. intelligence officials and satellite images have shown that the North Koreans are continuing their nuclear activities and expanding infrastructure, raising skepticism over their intentions.

Republican Sen. Lindsey Graham, meanwhile, accused China of using its influence over the North to sabotage the diplomatic process because of its trade war with the United States. China is North Korea’s main ally and economic benefactor.

“I see China’s hands all over this. We’re in a fight with China,” he said on “Fox News Sunday.” “So if I were President Trump, I would not let China use North Korea to back me off of the trade dispute.”

Graham, who is known for his hard-line stance, also warned the North not to test the Trump administration’s resolve. He alluded to an exchange between Pompeo and chief North Korean negotiator Kim Yong Chol in Pyongyang.

“And to our North Korean friends, I can’t say the word friend yet. You asked Pompeo: ‘Did he sleep well?’ If you knew what I knew about what we could do to the leadership of North Korea, you wouldn’t sleep very well,” Graham said.