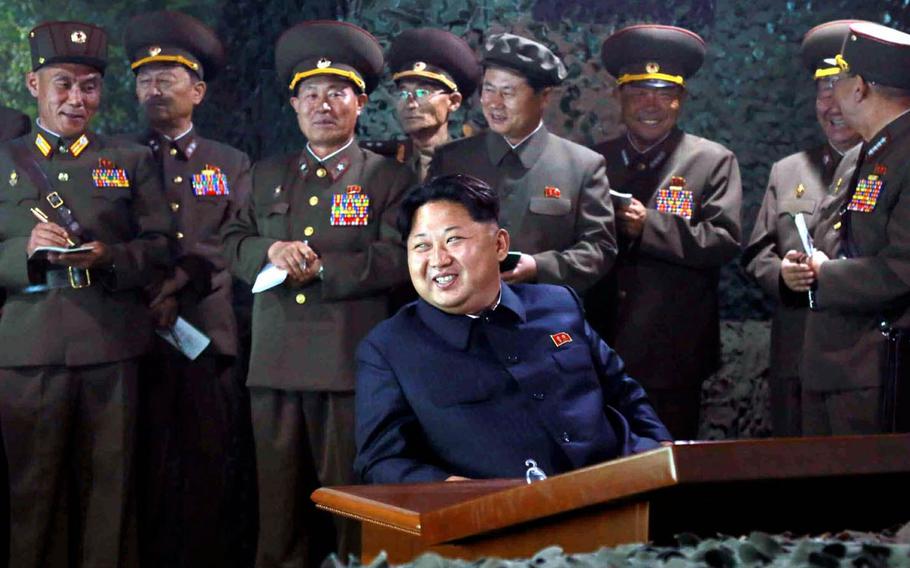 North Korean leader Kim Jong Un is seen in this undated photo from the Korean Central News Agency. North Korea convened its 7th Workers' Party Congress Friday, May 6, 2016, while also warning it will strengthen its nuclear weapons program due to Washington's "hostile policy" against the isolated communist country. (Courtesy of KCNA)

The 7th Workers’ Party Congress, which is expected to last through the weekend, is a chance for Kim, the relatively young leader, to showcase his leadership and bolster a personality cult that has kept his family dynasty in power for nearly seven decades.

Some 3,000 party officials and observers reportedly gathered in Pyongyang’s April 25 House of Culture, which was draped with red party banners and portraits of the country’s two previous leaders: Kim’s father and grandfather.

But don’t expect gavel-to-gavel live coverage. The Associated Press reported than more than 100 foreign journalists who went to Pyongyang for the event were not allowed inside. Instead, they were bused to a convention center where they waited outside for more than an hour before being taken back to their hotels.

The congress — the first since 1980 when Kim’s grandfather and the country’s founder Kim Il Sung was in charge — is happening against a backdrop of international tensions that have risen since the North staged its fourth nuclear test followed by a long-range rocket launch that prompted a harsh new round of U.N. sanctions earlier this year.

Kim’s regime has defiantly followed those with a steady drumbeat of attempted missile launches and threats, prompting speculation about another nuclear or missile test in conjunction with the congress.

Pyongyang’s defiance has also alienated key ally China, which signed onto the recent round of sanctions. Beijing apparently did not send representation to the congress, though it had a high-profile delegation at the last one.

State-run media offered few details about the meeting, which was expected to include an address by Kim and party elections. The Korean Central News Agency said it would be a “historic celebration” and hailed Kim as a strong leader who has armed the country with a nuclear deterrent against the U.S. and other enemies so his people could focus on reviving the economy.

In a separate editorial attributed to newspapers, it also hinted at a reshuffling, saying the congress would consolidate the party with “veteran and tested political staff sharing thought, breath and pace with Kim Jong Un.”

South Korea wasn’t taking anything for granted. Despite a national holiday, the presidential office had all hands on deck to carefully monitor events in North Korea so it could cope with any unexpected developments, the Yonhap news agency reported.

“It is perfectly rational to counter nuclear weapons with nuclear weapons,” the committee said, adding the country will not change its “position as a nuclear power.”

South Korea’s leadership should “get Washington to give up its hostile policy toward the DPRK” if it wants to resolve the nuclear standoff, the statement said, using the acronym for the North’s official name: Democratic People’s Republic of Korea.

About 28,500 U.S. troops are stationed in South Korea and the allies regularly stage military exercises that anger the North, which calls them a rehearsal for an invasion.

The divided peninsula is technically still in a state of war after the 1950-53 conflict ended with a truce instead of a peace treaty.