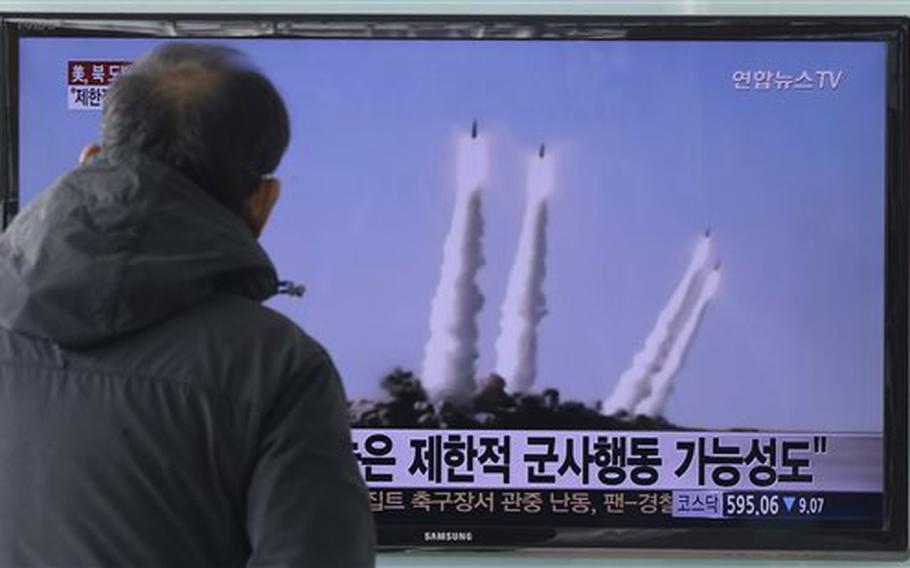 A man watches a TV news program showing the file footage of the missile launch conducted by North Korea, at Seoul Railway Station in Seoul, South Korea, Monday, Feb. 9, 2015. North Korea test-fired five short-range missiles into the sea on Sunday in its second such weapons test this year, a South Korean defense official said, amid dimming prospects for the resumption of high-level talks between the rival countries. The letters on the screen read " Military Actions". (Ahn Young-joon/AP)

North Korea’s launch of five missiles may be more than just a typical response ahead of annual U.S.-South Korea military exercises, analysts and officials said Monday.

The missiles, which flew about 125 miles Sunday before splashing down off North Korea’s eastern coast, seemed to demonstrate improved capabilities, said Yang Uk, senior researcher with the Korea Defense and Security Forum.

The surface-to-surface missiles appear to be a quasi-ballistic copy of a Russian model than can change path while flying, he said.

“That its missiles ranges are getting longer probably implies that the North might have USFK’s Camp Pyeongtaek and Osan Air Base in its inland shooting range,” Yang said. “I think we’re going to need to be more careful about it.”

South Korea’s Defense Ministry did not issue a formal statement regarding the missile launches. Instead, officials texted comments to individual reporters.

“The Ministry of National Defense is trying to understand North Korea’s intention or motive now,” one messagesaid. “Our military is … keeping a close eye on the status of the North Korean military, while we beef up U.S.-South Korean combined surveillance readiness.”

A ministry spokesman told Stars and Stripes that a final assessment of the missiles could take several months and won’t be made public.

Last month, South Korean President Park Geun-hye announced she would like to hold talks without preconditions with North Korean leader Kim Jong-un. North Korea responded that the bilateral exercises had to be canceled as a precondition, which Seoul ruled out.

“Inside the North, the country probably wanted to show to its people that their country is powerful to such an extent as to fire those missiles,” Yang said.