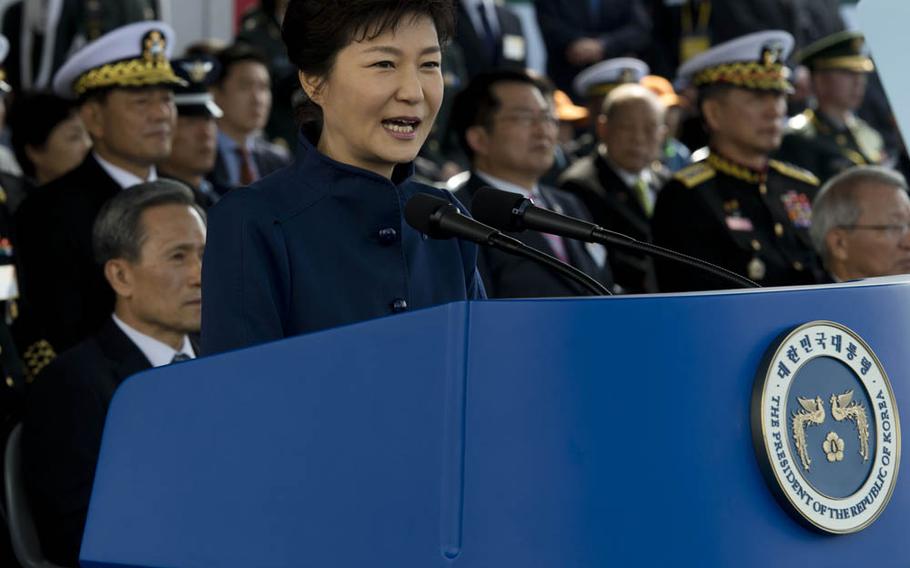 South Korean President Park Geun-hye is scheduled to meet with U.S. President Barack Obama for summit talks Friday, Oct. 16, 2015, in Washington, D.C. Just months after frictions along the perpetually tense Demilitarized Zone rose to a boiling point, a problematic North Korea is expected to dominate the conversation. (Courtesy of the Department of Defense)

SEOUL, South Korea — Just months after frictions along the Demilitarized Zone rose to a boiling point, North Korea is once again expected to dominate summit talks Friday between the leaders of the United States and South Korea.

The meeting with President Barack Obama will cap South Korean President Park Geun-hye’s three-day visit to Washington, which will include a Wednesday wreath-laying ceremony at the Korean War Veterans Memorial and a Thursday visit to the Pentagon. Park will also have lunch with Vice President Joe Biden to discuss trade issues, according to South Korea’s presidential Blue House.

The possibility of another provocation by the North — which has a long history of them to wring aid and other concessions from the West — is expected to dominate discussion with Obama. Some analysts thought Pyongyang might conduct its fourth nuclear test or carry out a rocket launch that most see as a test of ballistic missile capabilities in conjunction with the 70th anniversary celebrations of its ruling Workers' Party last Saturday.

While there were no provocations, North Korean leader Kim Jong Un announced at a mass rally that his country is prepared to go to war against the U.S. and called the North “an impenetrable fortress and a global military power,” The Associated Press reported.

Park might also want to dispel Washington’s concerns that South Korea is falling unduly under the influence of neighboring China, said Yoo Chan-yul, a professor of political science and diplomacy at Duksung Women’s University in Seoul. The talks will serve as an affirmation that relations between the U.S. and South Korea are strong, he said.

Park and Obama are likely to skirt sensitive issues regarding Seoul’s relationship with Washington’s other key Asian ally, Japan, particularly the forced prostitution of South Korean women during its occupation of the Korean Peninsula in the early 20th century, he said.

The meeting comes more than two months after a land mine planted by the North maimed two South Korean soldiers on routine patrol of the DMZ. That sparked a quickly escalating crisis that was defused after three days of rare inter-Korean negotiations. Park vowed to retaliate forcefully to North Korean aggression during that incident, which led the U.S. and South Korean militaries to take the unusual step of temporarily halting a major joint exercise.

“Our response was appropriately calm and resolute because of the trust and confidence that we built through our close coordination and President Park’s strong leadership,” U.S. Deputy Secretary of State Antony Blinken said last week.

Park’s visit, initially scheduled for earlier this year, was postponed after the outbreak of Middle East Respiratory Syndrome in South Korea.