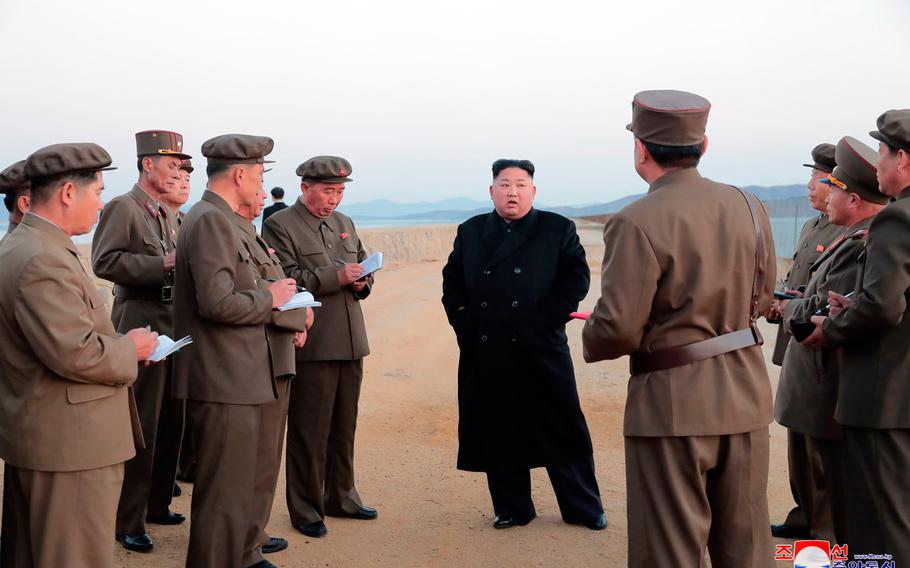 SEOUL, South Korea — North Korea’s test of what it called a new “ultramodern tactical weapon” – the first public display of firepower in nearly a year – was likely an effort by the communist state to increase its leverage amid an impasse in nuclear talks with the United States, experts said.

In a sign the two sides are eager to keep dialogue alive, the U.S. response to the announcement about last week’s weapon test was relatively muted. The State Department also said it appreciated North Korea’s cooperation in releasing an American who the communist state said had been detained for illegal entry.

Little is known about the weapon that was tested, but it did not appear to be the type of long-range missiles frequently fired last year because South Korea and the United States didn’t report detecting any such activity.

Experts said it was likely meant as a less provocative message to Washington that the North is continuing to develop weapons it insists are for self-defense.

“It may be that the North is releasing a little bit of information with the purpose of enhancing its leverage in negotiations that are likely to take place in the future,” said Han Yong-sup, a professor at the Korea National Defense University. “What they are saying is ‘we’ll keep developing weapons like this unless the outside world or the U.S. takes corresponding measures.”

The test came days after a planned meeting in New York between Secretary of State Mike Pompeo and a senior North Korean envoy was canceled. President Donald Trump also has said he may hold a second summit with Kim next year as progress has been slow since the two men first met in June in Singapore.

A senior CIA official, meanwhile, held talks with North Korean officials in the truce village of Panmunjom, which straddles the border that divides the peninsula, the Yonhap News Agency reported, citing unnamed sources.

Andrew Kim, who played a key role in the June summit, was likely in the region to try to narrow the differences between the two sides so the meeting between Pompeo and Kim Yong Chol could be rescheduled, according to Yonhap.

The Korean Central News Agency said Kim’s father, who died in 2011, had begun the development of the weapon system.

The leader “added that the weapon is just like a posthumous weapon and he missed Kim Jong Il very much while seeing the great success of its test,” KCNA reported.

North Korea watchers speculated it may have been a type of long-range artillery or a missile that could be used for self-defense but wouldn’t pose a threat to other countries beyond the divided peninsula.

It was Kim’s first publicized visit to a weapons test site since the North test-fired an intercontinental ballistic missile toward Japan on Nov. 28. That was the last such missile test before diplomatic efforts to persuade the North to give up its nuclear weapons program began to gain momentum.

The Trump administration has cited the North’s decision to halt long-range missile and nuclear tests as evidence of progress since the two sides agreed to work toward the “complete denuclearization of the Korean Peninsula” in their first-ever summit in June.

But experts have pointed out the communist state could resume the tests at any time.

Pyongyang is seeking reciprocal measures for steps it has already taken, including the testing moratorium, the release of three American detainees and the return of remains belonging to U.S. servicemembers killed in the 1950-53 Korean War.

In another apparent concession, the North on Friday deported an American citizen it said had been detained for illegally entering the country from China on Oct. 16. KCNA identified the man as Bruce Byron Lowrance.

The release was a contrast in past treatment of Americans who had been held for lengthy periods of time. Many were freed after intervention by high-profile American officials. However, University of Virginia student Otto Warmbier died last year after being released in a coma after 17 months of captivity.

“The United States appreciates the cooperation of (North Korea) and the embassy of Sweden in facilitating the release of an American citizen,” Pompeo said in a statement. Sweden handles consular issues for U.S. citizens in North Korea.