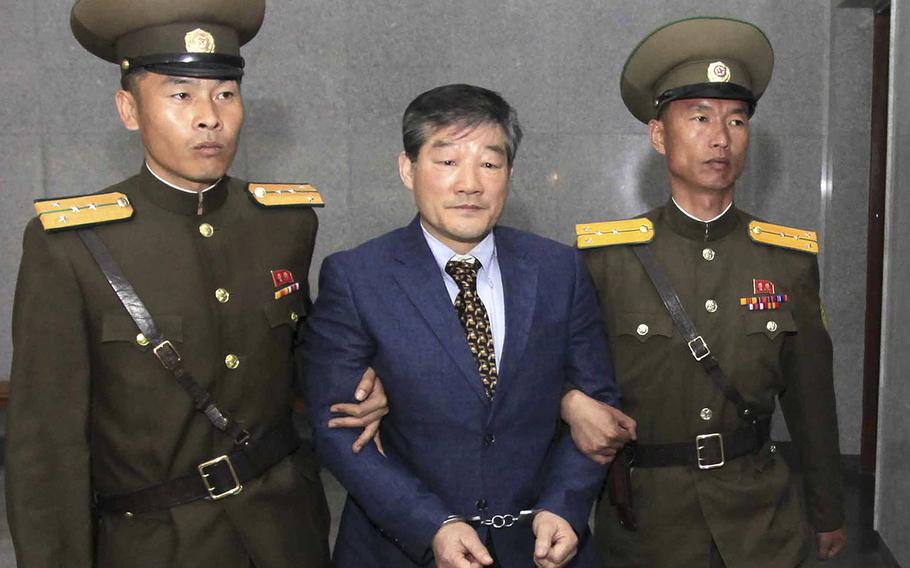 SEOUL, South Korea — North Korea freed three American detainees on Wednesday, allowing them to leave with the visiting secretary of state and removing a potential obstacle for a planned summit between President Donald Trump and Kim Jong Un.

Trump announced the release of the three men on Twitter, capping hours of suspense after Secretary of State Mike Pompeo made his second surprise visit to Pyongyang in just over a month.

With the prisoners freed, Trump told reporters that the date and venue for the summit would be announced “within three days,” but added that the meeting would not be held in the Demilitarized Zone dividing the Korean peninsula.

"Secretary of State Mike Pompeo is in the air and on his way back from North Korea with the 3 wonderful gentlemen that everyone is looking so forward to meeting,” he tweeted. “They seem to be in good health.”

In a second tweet, the president said the plane would land at Andrews Air Force Base at 2 a.m. and he would be there to greet it.

The plane made a stop at Yokota Air Base in Japan late Wednesday. Pompeo told reporters traveling with him that the former detainees were to be transferred to another plane that was better equipped to handle medical needs.

The president has said frequently in recent weeks that he was ready to meet with Kim in what would be the first-ever U.S.-North Korean summit.

But the lack of a formal announcement fueled speculation that the sides were having trouble agreeing on issues related to the talks over the North’s nuclear weapons program.

Later Wednesday, Trump told his South Korean counterpart Moon Jae-in on the phone that he will soon announce the time and place, according to Moon’s office.

GRANTED AMNESTYOne major U.S. demand has been the release of the three Korean-Americans — Kim Dong Chul, Kim Hak Song and Tony Kim — being held by the North on accusations of anti-state activities.

The stakes were high because Trump has been hinting that the men’s release was imminent so failure to do so would have been deeply embarrassing.

The men were freed after a 90-minute meeting between Pompeo and Kim Jong Un, according to the pool report. North Korean officials reportedly said they had been granted amnesty.

Blue House spokesman Yoon Young-chan said the release “will be a positive factor for the success of the North Korea-United States summit.”

Tony Kim’s family also expressed gratitude to all who worked for his freedom in a statement.

“We also want to thank the President for engaging directly with North Korea,” it added. “Mostly, we thank God for Tony’s safe return.”

The secretary of state, who previously traveled to Pyongyang in early April as the head of the CIA, told the North Koreans they could “have all the opportunities your people so richly deserve” if they give up their nuclear weapons.

“For decades, we have been adversaries,” he told Kim Yong Chol. “Now we are hopeful that we can work together to resolve this conflict.”

“There are many challenges along the way. But you have been a great partner in working to make sure our two leaders will have a summit that is successful,” he added.

Kim Yong Chol stressed that the diplomatic push and efforts to improve relations with South Korea were part of a policy to “concentrate all efforts into economic progress” for the country.

"This is not a result of sanctions that have been imposed from outside," he added, citing the will of the Korean people.

Trump has said that his maximum pressure campaign brought North Korea to the negotiating table, prompting a weekend rebuke in North Korea’s state-run media that warned he was spoiling the mood for detente.

SECRET MISSIONPompeo’s trip was shrouded in secrecy. He was accompanied by senior aides, a security detail and a journalist each from The Associated Press and The Washington Post.

Trump revealed the mission Tuesday afternoon as he announced the United States was withdrawing from a landmark nuclear deal with Iran. Critics have warned that reneging on that deal could jeopardize negotiations with the North.

After landing in Pyongyang, a motorcade took the U.S. delegation to the Korea Hotel, which is frequently used for foreigners.

Pompeo became only the second sitting secretary of state to visit the reclusive nation after Madeleine Albright went in 2000 as part of an unsuccessful bid to arrange a meeting between then-President Bill Clinton and Kim Jong Un's father, Kim Jong Il.

Concern about the three detainees has risen since U.S. college student Otto Warmbier died in June after he was returned in a coma to the United States following more than a year of detention in the North for allegedly stealing a propaganda poster.

Kim Dong Chul, a former Virginia resident, was arrested in October 2015 then convicted of espionage and sentenced in April 2016 to 10 years in prison with hard labor.

He reportedly ran a trade and hotel service company in Rason, a special economic zone on North Korea’s border with Russia.

Kim Hak Song worked in agricultural development at an experimental farm run by the Pyongyang University of Science and Technology. He was detained last May for alleged anti-state activities.

The university is the only privately funded college in North Korea and was founded in 2010 with donations from Christian groups.

The White House said separately that Trump “appreciates” Kim Jong Un’s action in releasing the detainees and “views this as a positive gesture of goodwill.”

The statement said the three Americans were all able to walk on the plane without assistance.

DIPLOMATIC MOMENTUMThe decision to free the men was the latest in a series of diplomatic gains that have eased tensions after months of North Korean missile and nuclear tests and threats of war.

Kim Jong Un also traveled to China earlier this week, his second trip to the North’s communist benefactor in less than two months. His second summit with Chinese President Xi Jinping was widely interpreted as showing that Beijing will insist on maintaining influence over the rapidly unfolding events.

The 34-year-old North Korean leader also met with South Korean President Moon Jae-in on April 27 in the heavily fortified border that has divided the peninsula since the 1950-53 Korean War ended in an armistice instead of a peace treaty.

The two Koreas agreed to seek a formal end to the war and to work toward the “complete denuclearization” of the peninsula.

Skeptics have raised concern that the United States and the North will likely face sharp differences over what denuclearization means, including whether the North may link it to calls for the withdrawal of about 28,500 American troops in the South.

Trump also has said U.S. troops are "not on the table."

Washington has demanded that the North agree to a verifiable dismantling of its nuclear program, while Pyongyang seeks a “phased and synchronized” approach.

North Korea has agreed in past decades to give up its nuclear ambitions in exchange for aid and other concessions from the West. But those deals have collapsed amid allegations of cheating and distrust, and U.S. officials have vowed not to repeat the mistakes of the past.

“While our administration is encouraged that North Korea freed these innocent hostages, we will not let off the pressure until we achieve full denuclearization,” he said in a statement.