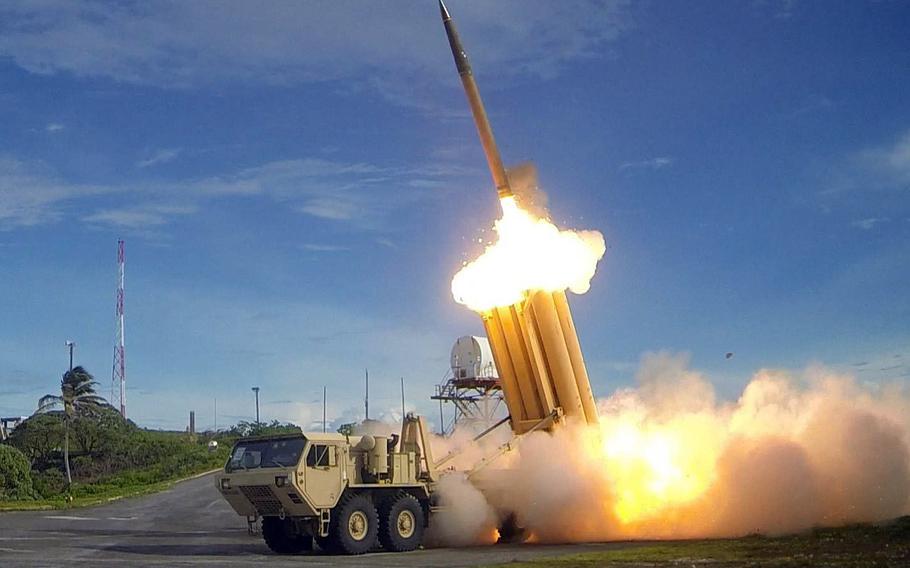 A Terminal High Altitude Area Defense interceptor is launched during a successful intercept test in 2013. (Courtesy Department of Defense)

The comments from Adm. James Winnefeld, vice chairman of the Joint Chiefs of Staff, came Tuesday in Washington, just hours before Pyongyang claimed it had developed a miniaturized nuclear weapon. If true, that would raise the stakes over its even more worrisome nuclear program.

“Just a few weeks ago, we saw Pyongyang raving about a test of its submarine launched ballistic missile capability. Fortunately, they’ve not gotten as far as their clever video editors and spinmeisters would have us believe,” Winnefeld said. “They are years away from developing this capability.”

North Korea said earlier this month that it had test-fired a ballistic missile underwater, raising concerns about the sophistication of its weapons systems. While the North’s claim that it conducted a test is generally accepted — the South’s Ministry of National Defense has called it “very serious and worrying” — questions remain about how it was conducted and how developed the North’s SLBM capability really is.

On its website 38 North, the U.S.-Korea Institute at John Hopkins University later raised questions about the test, saying it may have been conducted from a submerged barge instead of a submarine, and that images released by North Korea may have been altered. The analysis concluded that the North’s seaborne ballistic missile threat is “emerging” rather than “imminent.”

However, Reuters previously reported that a South Korean defense official said North Korean photographs purporting to show a missile launched from the sea appeared to be real. That official estimated the North could develop a submarine armed with ballistic missiles within two to three years.

Winnefeld, speaking on missile defense at the Center for Strategic and International Studies, said the North poses “the most immediate concern” of catastrophic missile attack to the U.S. because of its capabilities, followed by Iran. And if North Korea eventually develops SLBM capabilities, “it will present a hard-to-detect danger for Japan and South Korea as well as our servicemembers stationed in the region.”

He said the U.S. remains interested in deploying the Terminal High Altitude Area Defense system to South Korea, a possibility that has spawned concern in Seoul because China and Russia view THAAD as a threat.

Winnefeld said the U.S. has not engaged in formal discussions with the South Korean government about THAAD.

“As always, we’re respectful of our host nation’s concerns, and it goes without saying that the ROK will have to want this system in place,” he said.

Winnefeld’s comments came just a day after U.S. Secretary of State John Kerry made headlines here with a brief mention of THAAD during his visit to Seoul.

“And nobody quite knows what a reckless person like this fellow will do, so you have to be prepared for every eventuality, which is why we redeployed some ships and forces and why we’re talking about THAAD and other things today,” he said.