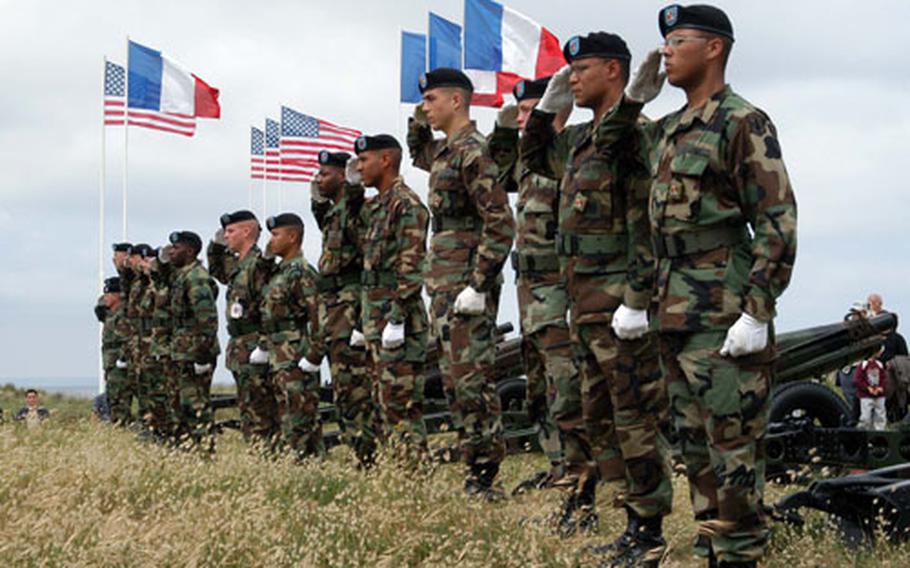 Soldiers from the Babenhausen, Germany-based 1st Battalion, 27th Field Artillery Regiment practice at Utah Beach, France, for the D-Day ceremonies to be held there on Sunday. (Michael Abrams / S&S)

Soldiers from the Babenhausen, Germany-based 1st Battalion, 27th Field Artillery Regiment practice at Utah Beach, France, for the D-Day ceremonies to be held there on Sunday. (Michael Abrams / S&S) 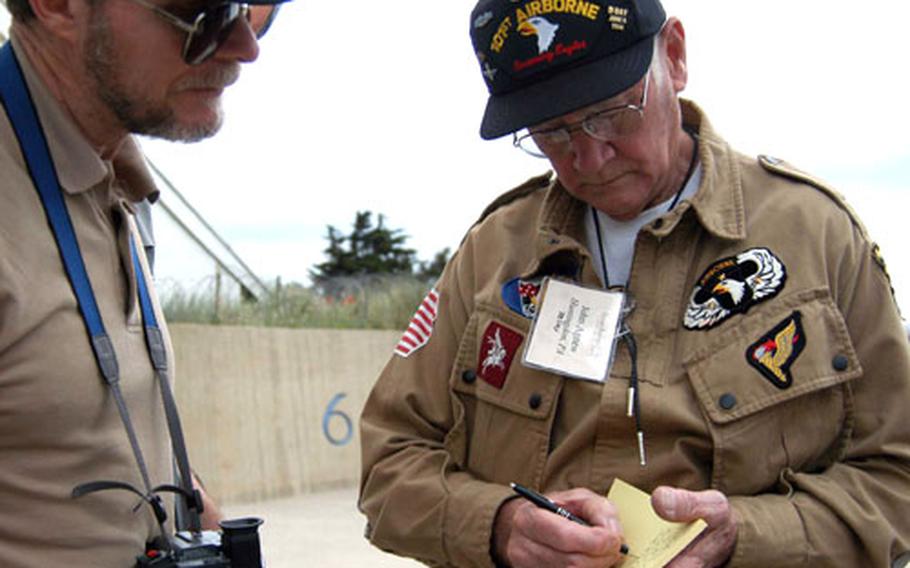 John Agnew, right, a 101st Airborne Division veteran, signs an autograph at Utah Beach, France, on Friday. Thousands of veterans have come to the beaches of Normandy fot the anniversary of the D-Day invasion. (Michael Abrams / S&S)

Area hotels were booked up to two years ago and thousands of allied soldiers &#8212; both present and former &#8212; are roaming the beaches and peeking over hedgerows. Every so often, concussions from ceremonial cannon reverberate through the air.

Call it the second invasion of Normandy, albeit of a much friendlier sort.

Up to 20,000 people are expected to attend 16 official ceremonies honoring veterans of the allied forces that stormed Normandy&#8217;s beaches on D-Day, June 6, 1944.

Among them are 8,000 veterans and 3,500 journalists, The Associated Press reported. Many of the ceremonies running through Monday, however, require special credentials. That&#8217;s leaving some tourists beating a retreat as early as Saturday &#8212; the day before the 60th anniversary events.

By Sunday, it will be as if martial law has been declared. All roads leading to the region, including the main east-west artery, National Route 13, will close between 6 a.m. and 8 p.m. Speed limits on many of the smaller roads connecting the most popular sites have been reduced. Air and sea traffic also are being strictly limited.

All this to allow for the safe passage of a coterie of heads of state &#8212; including President Bush, French President Jacques Chirac, German Chancellor Gerhard Schroeder and British Prime Minister Tony Blair &#8212; and various other military and political dignitaries, who will preside over Sunday&#8217;s ceremonies.

Even the local cell phone networks are jammed up because so many organizers, journalists and security managers are tapping into the satellites, one U.S. Army spokesman said.

To help provide security over the weekend, 9,000 French soldiers, 6,000 gendarmes and 3,000 U.S. troops are in Normandy, AP reported. Many of the U.S. troops also will be escorting veterans to their seats at the ceremonies.

The Cornwalls, whose hometown in Sonning, England, was a major U.S. troop billeting area during World War II, hope to see as much as they can before the area shuts down to vehicle traffic.