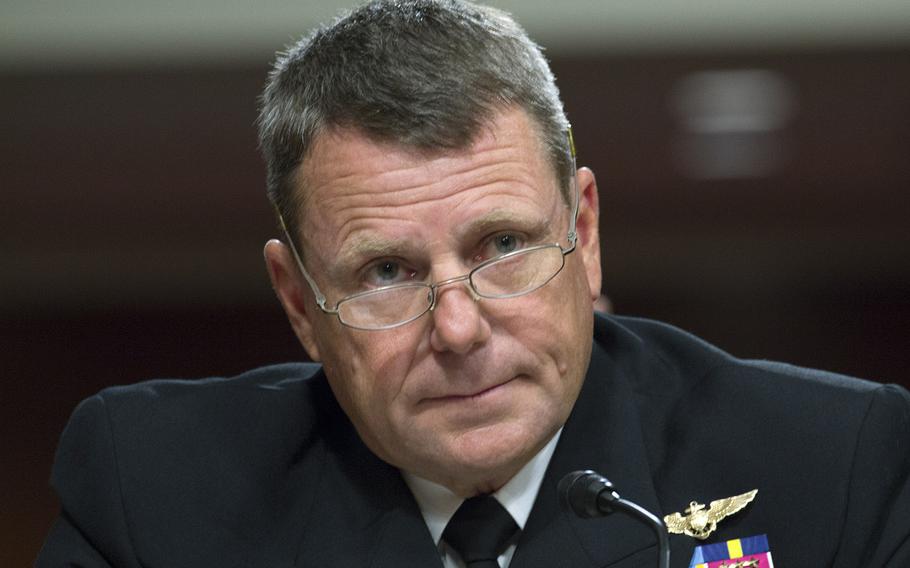 Adm. Bill Gortney, seen here at his Senate confirmation hearing in July, 2014, says he believes North Korea has an operational road-mobile missile that could carry nuclear weapons to the U.S. (Joe Gromelski/Stars and Stripes)

WASHINGTON — North Korea has an operational road-mobile missile that could carry nuclear weapons to the United States, according to the commander of North American Aerospace Defense Command.

The KN-08 intercontinental ballistic missile was first paraded in North Korea in 2012. Many analysts suspected at the time that the missiles on display were mock-ups and doubted that the country had actually developed the weapon.

But on Tuesday, Adm. Bill Gortney, the head of NORAD and U.S. Northern Command, told reporters at the Pentagon that he thinks Pyongyang has achieved a breakthrough.

“We assess that it’s operational today, and so we practice to go against that,” he said.

Gortney said North Korea has not yet tested the missile, and he declined to explain why he thinks the missile is ready to go.

The U.S. military does not consider its weapons to be operational until they’ve been tested.

The KN-08, if operationally deployed, would be more difficult to defeat than fixed-site missiles because it could potentially be moved around secretly by the North Korean regime to make it more difficult for the U.S. to locate and target preemptively during a crisis.

“It’s the relocatable target set that really impedes our ability to find, fix and finish the threat,” a problem which is compounded by the fact that the U.S. military does not have “persistent” intelligence, surveillance and reconnaissance assets over North Korea, Gortney said.

North Korea also has the ability to marry the missile with a nuclear warhead, according to the NORAD chief.

“Our assessment is that they have the ability to put a nuclear weapon on a KN-08 and shoot it at the [U.S.] homeland,” he said.

The U.S. ballistic missile defense system has a spotty test record. Gortney noted the “fits and starts” that it’s experienced, but expressed confidence that it would work in a crisis.

The U.S. has 30 ground-based interceptors at Fort Greely, Alaska, and Vandenberg Air Force Base, Calif.

As the leader of NORAD and NORTHCOM, Gortney would be responsible for launching the interceptors against North Korean missiles if they threatened the homeland.

“I own the trigger on this,” he said, “and I have high confidence that it will work against North Korea.”