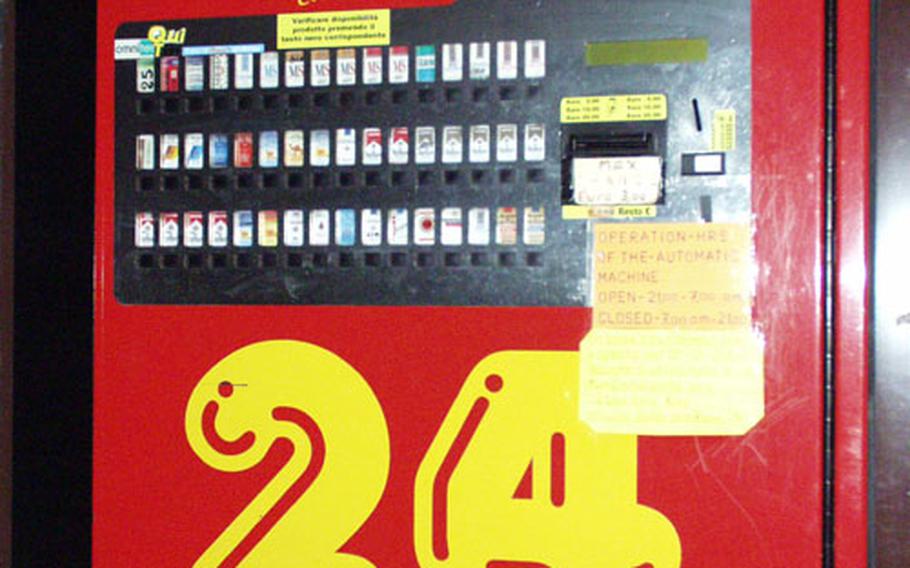 In an attempt to cut down on smoking by teens, a recent Italian law prohibits the operation of automatic cigarette vending machines such as this one near Area 1 at Aviano Air Base from 7 a.m. to 9 p.m. The theory is that those under 18 - prohibited by law from smoking in Italy - won&#39;t find it as easy to buy cigarettes early in the morning or late at night. (Kent Harris / S&S)

It may be the beginning of the end of smoking in all buildings other than private residences in Italy.

The first major anti-smoking law was passed in 1975, and a few other similar measures have been adopted since then.

But the edict that started with the new year &#8212; and that fully goes into force Jan. 13, 2005 &#8212; may have a bit more momentum than past efforts. The country&#8217;s health minister, Girolamo Sirchia, is a leading cancer expert and anti-smoking proponent. He helped push through the measure, which in theory could be enforced immediately.

Restaurants may be forced to spend thousands of euros to install the equipment necessary to have a smoking area.

But Tufo&#8217;s parents, Carmine and Clelia, won&#8217;t have to worry. Their restaurant has been smoke-free for more than two years.

Tufo said the family decided smoke fumes were driving customers away. So they bought signs, posted them, and have had few complaints since then.

Under the new law, police can issue fines ranging from 25 to 250 euros. If a pregnant woman or a child under 12 is present, the fines are doubled. Business owners who don&#8217;t eventually comply face larger fines.

Pierangelo Calderan, who runs Tussi&#8217;s restaurant &#8212; another popular destination for Americans in Aviano &#8212; said he wasn&#8217;t thinking primarily of his customers when he banned smoking about a year ago.

A nonsmoker, Calderan said he wanted a safe environment for his employees to work. So he snorts at the idea of establishing a specific place for smokers to light up, saying that would still endanger his employees.

He said his customers have had mixed reactions to the change.

Of course, that might not be an option if no other restaurants in the area decide to spend the money to create a designated smoking area. Such areas have to be designed to not allow smoke to drift into the rest of the building, meaning smoke-proofing construction and high-powered fans need to be installed.

Told about the changes, some Americans expressed surprise.

Plyler said he could understand why Italians might not be happy with the law.

Airman 1st Class Breanna Rende, one of the friends he was eating with at the Spaghetti House, said she could see both sides.

Italians, in general, are skeptical about enforcement of the new law.

Smokers will not only have fewer places to puff away, but under new laws that recently went into effect in Italy, they&#8217;ll find it harder to buy cigarettes.

One of the new laws banned the operation of automatic cigarette vending machines from 7 a.m. to 9 p.m. The new laws don&#8217;t limit sales in tobacco shops or stores during those hours.

The vending machines measure targets smoking by teenagers. People can&#8217;t legally light up in Italy until they&#8217;re 18 years old. Since a machine can&#8217;t determine the age of a customer, everyone&#8217;s banned from using them during what officials consider to be the most likely hours a teen would purchase them.

Such machines have, until recently, advertised 24-hour service. One such machine is within a few blocks of Area 1 at Aviano Air Base. That&#8217;s where the Department of Defense Dependents School is located.

The fact that the machine has two signs &#8212; one in English and one in Italian &#8212; explaining the new regulations suggests that at least some Americans are frequent customers.

McEnery said if limiting hours cuts down on teen smoking, he&#8217;s all for it.