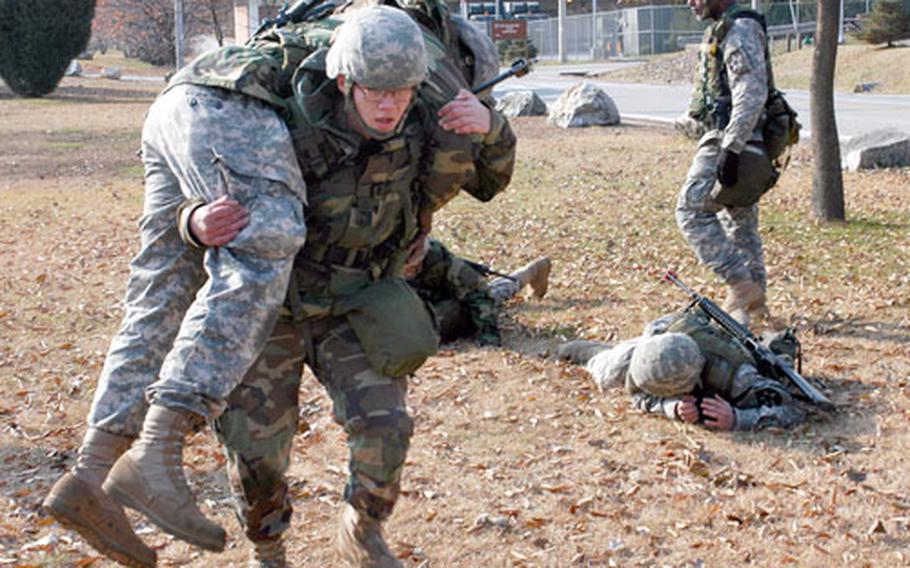 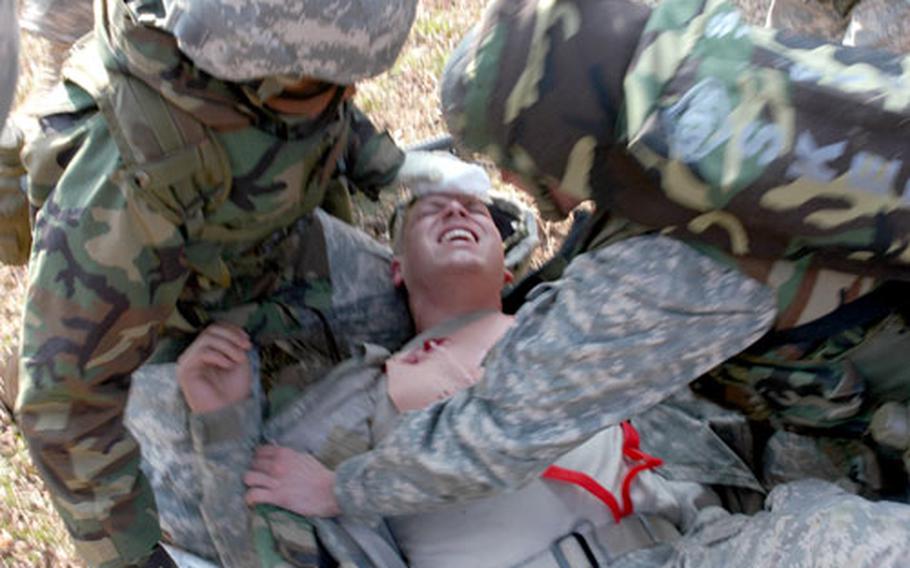 CAMP CASEY, South Korea &#8212; In the absence of motivational gunfire, there is a lot of yelling.

Pfc. James Fensterer yells for attention to simulated wounds to his head, arm, chest and leg. Medical trainers yell at squad members taking the inaugural Soldier First Responder course to keep the airway open, stop the bleeding and get out of harm&#8217;s way without stopping to catch their breaths.

When the scenario is over, all of that yelling appears to have accomplished the trainers&#8217; goals.

The 15 soldiers from the 2nd Infantry Division&#8217;s Special Troops Battalion training in the classroom on Thursday and in scenarios on Friday were the first in South Korea to take the new course, said Capt. Gordon Washington, division physician assistant.

Washington previously oversaw this training, which teaches nonmedical soldiers how to save lives, for more than 4,500 soldiers at the 2nd Brigade Combat Team in Fort Carson, Colo.

The training is less extensive than the Army&#8217;s combat lifesaver course but more detailed than the average first-aid familiarization.

In addition to the &#8220;ABCs&#8221; &#8212; airway, breathing and circulation &#8212; soldiers learn how to insert intravenous needles in arms, breathing tubes through the nose and 14-gauge needles through the chest to keep a soldier going.

If all nonmedical soldiers can learn tasks like effectively stopping limbs from bleeding, battlefield casualties would be reduced drastically, Washington said.

The training currently is limited to the Special Troops Battalion, but Washington says he believes the whole division could benefit from the course.

Soldiers who have taken the combat lifesaver course, or CLS, took the lead during the scenarios; it&#8217;s customary during any medical emergency to defer to the most experienced and capable person, regardless of rank.

Even the combat lifesavers were hyped up from the tempo.

Like any new task &#8212; and especially ones that require saving lives &#8212; soldiers need practice before they become proficient. Once they know their stuff, course leaders said, the soldiers will go back to their units and train their fellow soldiers under supervision.

&#8220;Some of the soldiers have even said they want to reclass(ify) to be medics, which is always nice to see,&#8221; said Sgt. Joshua Daigle, the course&#8217;s noncommissioned officer in charge.