Noncombat injuries make up most of Landstuhl’s war zone patients 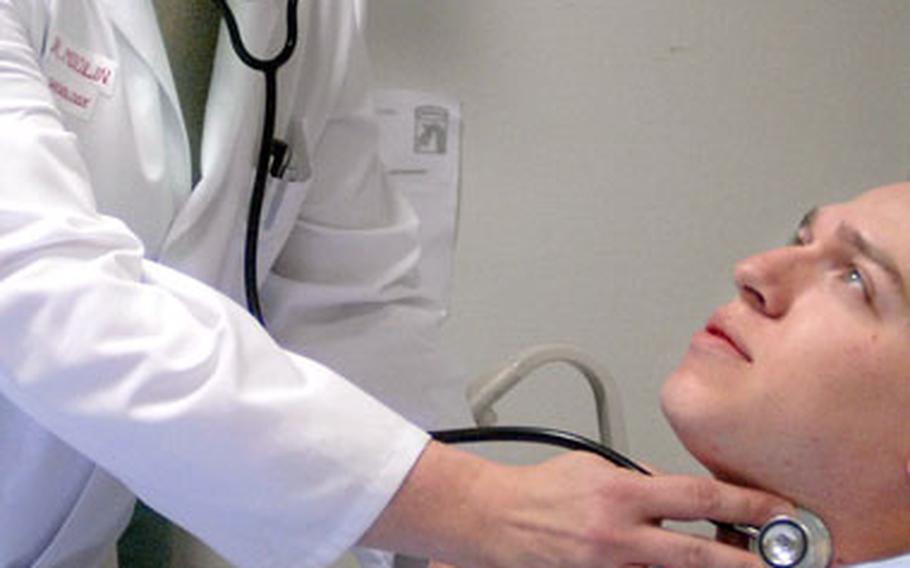 While doctors at Landstuhl Regional Medical Center in Germany have treated more than 37,000 patients from the wars in Iraq and Afghanistan, only about 20 percent of those were seen for combat-related wounds, officials say.

Troops and civilians from the combat zones, including Americans and patients from 41 other nations, have sought treatment at the U.S. Army hospital for ailments including heart problems, back injuries, kidney stones, respiratory illnesses, gynecological issues and dermatological complications, officials said.

&#8220;When you&#8217;ve got more than 140,000 people in any one place, you have to expect diseases and injuries that have to be evaluated and treated,&#8221; said Dr. Randolph Modlin, an Army colonel and chief of cardiology at Landstuhl.

More than half of the noncombat patients flown to Landstuhl from the combat zones arrive for treatment for chest pain and possible heart problems, though not all diagnoses are cardiac-related, Modlin said.

One reason they seek treatment at Landstuhl is there no cardiologist in theater, though a cardiologist at times rotates through the U.S. medical treatment facility in Kuwait, he said.

&#8220;In my opinion, it would be cost effective to have a cardiologist downrange, since chest pain is the number one [complication],&#8221; he said.

But a cardiologist alone wouldn&#8217;t solve all the problems because the combat support hospitals also lack the high-tech diagnostic or treatment equipment that cardiac patients need, Modlin added.

From the early days of the wars, the number of inpatients and outpatients flown to Germany from Iraq, Afghanistan or surrounding areas has decreased.

One reason is that downrange military treatment facilities either augmented or improved the medical services provided, said both Modlin and 1st Lt. Justin Kocher, a spokesman for the 28th Combat Support Hospital in Baghdad.

They don&#8217;t have to spend so much time traveling for medical care and can return to their units quicker, he said.

A major medical challenge has been the high number of reservists and National Guardsmen activated for the war, Modlin said, a population who tends to be older and less prepared physically for the rigors of combat. Following cardiac complaints, back pain is the second most common noncombat injury Landstuhl doctors see.