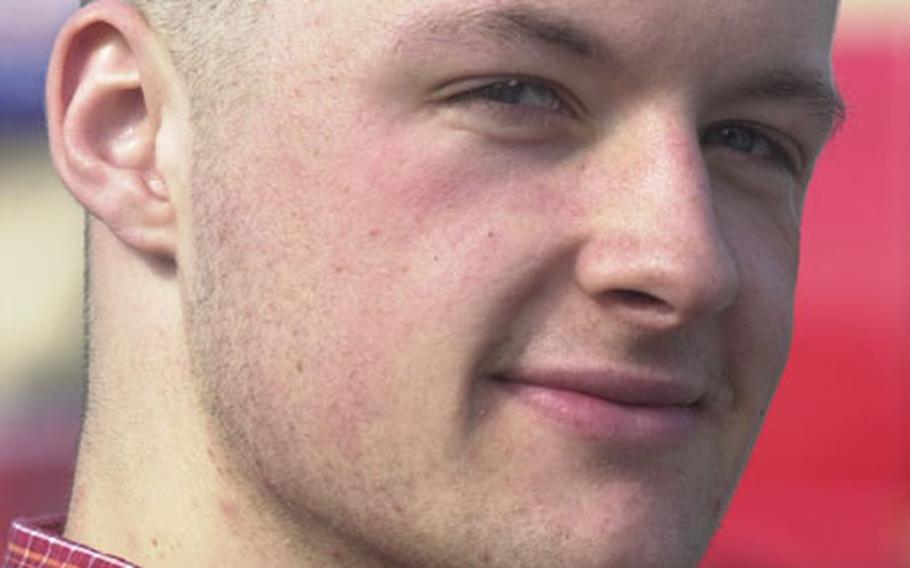 Spc. Justin Brown — Association of the United States Army&#39;s Soldier of the Year. He is a test, measurement and diagnostic equipment maintenance support specialist for the 1st Armored Division ()

BAUMHOLDER, Germany &#8212; When Spc. Justin Brown returned to Baumholder in September after winning the Association of the United States Army&#8217;s Soldier of The Year, his noncommisioned officer in charge, Sgt. 1st Class Robert Brannin and Brannin&#8217;s wife, Jutta, picked him up and suggested a detour past the base.

Though Brown jokes his celebrity wore off in about two months &#8212; &#8220;and I haven&#8217;t signed an autograph yet&#8221; &#8212; they were heady days. At the AUSA&#8217;s competition in Fort Meyer, Va., Brown met top Army officers including Gen. Eric Shinseki, chief of staff of the Army. Since then, he&#8217;s gotten more than $9,000 worth of goods in a free commissary shopping trip for being honored by the group &#8212; a private, nonprofit educational organization that supports the Army, including active duty, Reserve retirees and family members.

But winning the group&#8217;s inaugural soldier of the year title hasn&#8217;t been all glory-tripping because many soldiers were expecting the best all-around soldier to come from a combat-arms unit.

Instead, Brown&#8217;s military occupational specialty is a test, measurement and diagnostic equipment maintenance support specialist. &#8220;We repair the equipment used to repair equipment,&#8221; is the way Brown puts it. He&#8217;s one of only 150 soldiers in his occupation category in the entire Army.

Some fellow Baumholder soldiers were openly incredulous that a non-combat arms soldier got the award, but rationalize it away by saying all the war fighters were in the field, with no time for contests, Brown said. The difference between him and them is he went for it, Brown counters: &#8220;Some people just don&#8217;t seize opportunities.&#8221;

And Brown kept going further and further as the competition weeded out dozens of soldiers from bases around the world by throwing everything at them from night land navigation tests to selection boards.

&#8220;Not too many people like to go before boards,&#8221; where officers and NCOs judge both objective measures of military knowledge and subjective aspects such as military bearing, Morris says.

The fact that Brown was adjudged the complete soldier reflects well on non-combat arms types, the sergeant says.

In conversation, Brown is all similes and metaphors with a college-level vocabulary. He likens his technical job to a big stage production, where he&#8217;s part of the crew.

His success is no surprise to his mother, Rhonda Mueller. She said she knew her son was different when he was a high school sophomore in Mundelein, Ill., outside Chicago, and came home toting a calculus book.

Brown acknowledges he could have gone to a good college, and on to a suit-and-tie job. Except he never gave it a thought.

In the Army, Brown found mentors early in his career &#8212; basic training drill sergeants, Sgt. Luis Billingsly and Sgt. 1st Class Earnest Eiler. Their kudos for his work ethic &#8220;made me want to do my job that much better,&#8221; Brown recalls. As he was preparing to leave basic, Billingsly told him he expected to see him promoted often.

And that&#8217;s his plan. While Brown clearly loves the Army, he believes it can be even better. &#8220;I&#8217;m probably going to be in a long time, because I think I can change things,&#8221; he says. Like giving soldiers more than just the basics early on for crucial, demanding training such as land navigation.

Brown says he understood early what leadership means. The difference between people who demand respect and people who demonstrate real leadership &#8220;is you feel like you can trust [great leaders] with your life,&#8221; Brown says.