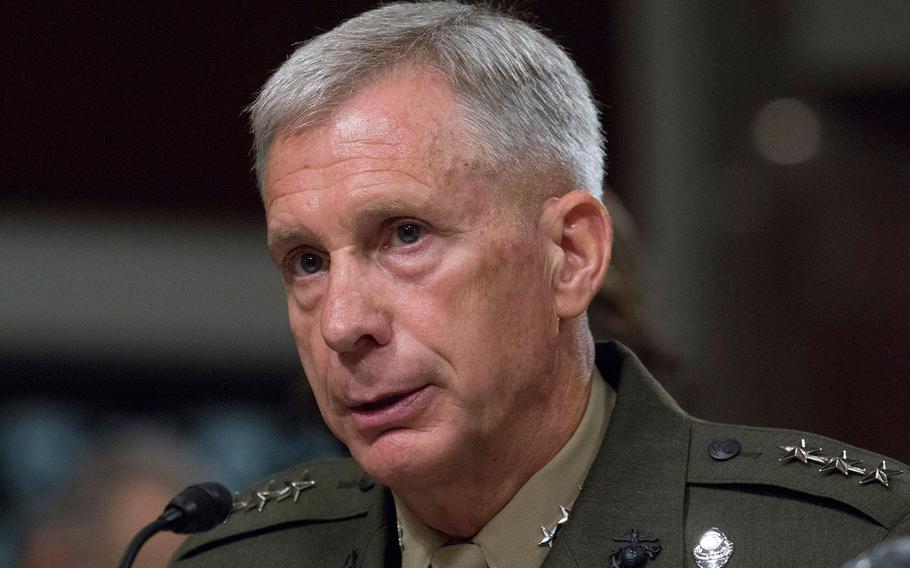 WASHINGTON — The Marine general tapped to lead U.S. Africa Command said Tuesday that the military lacks a grand strategy in Libya, where a small number of ground troops are now assisting in a struggle against the Islamic State group.

Lt. Gen. Thomas Waldhauser told a Senate committee that AFRICOM objectives include assisting the fledgling government and the fight against the extremist group. Amid grilling from Sen. John McCain, R-Ariz., he said he was not aware of any larger strategy beyond those aims.

Five years after U.S.-led NATO intervention toppled dictator Moammar Gadhafi, Libya has largely been overshadowed by the war against the Islamic State in Iraq and Syria. But instability there has recently offered a foothold for the jihadist fighters and led to the deployment of U.S. special operators to advise local forces.

“We continue to support that at this time. I am not aware of any overall grand strategy at this point,” Waldhauser said.

Waldhauser, who is director of joint force development with the Joint Chiefs of Staff, served in Operation Desert Storm and led combat troops in Afghanistan and Iraq. If confirmed by the Senate, he will replace Army Gen. David Rodriguez as the leader of AFRICOM, which oversees an increasingly complex variety of regional conflicts with extremist groups, such as al-Shabab in Somalia and Boko Haram in Nigeria.

Last month, top U.S. military officials disclosed talks with the Libyan government about sending more forces to the country amid its battle against the Islamic State. Waldhauser told McCain and the Senate Armed Services Committee that targets for airstrikes are being developed but no additional troops are needed “at the moment.”

McCain, who is chairman of the committee and a top critic of the Obama administration’s handling of Libya, pounced on the comment, saying it appears the military is acting in an ad hoc fashion as the Islamic State has grown its presence.

“‘At the moment’ means to me we don’t have a strategy,” McCain said. “Unfortunately, this administration has reacted at the moment with incrementalism, mission creep, a gradual escalation in Iraq and Syria and I don’t want to see the same thing in Libya.”

Earlier this year, President Barack Obama said a lack of planning for the aftermath after the fall of Gadhafi has been the biggest mistake of his presidency.

McCain said the growing problems of instability prove “chickens come home to roost” and will be a major challenge for the next leader of AFRICOM.

“How are you going to make chicken salad out of the situation, general?” he said.

The Senate Armed Services Committee was expected to vote soon on Waldhauser’s nomination, potentially moving it to a final vote on the Senate floor.