Noise and litter still a problem on Bar Row near Yokota 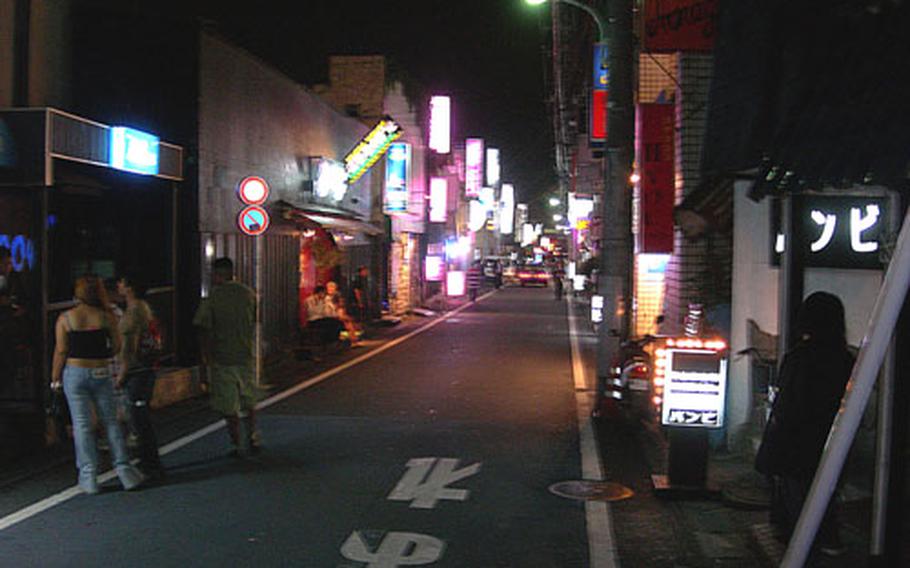 While base officials say the number of incidents involving Yokota Air Base personnel in the "Bar Row" area (pictured here) has decreased since a 1 a.m. to 6 a.m. restriction went into effect in May 2005, some local residents feel there still is a problem with noise and littering in the area. (Christopher B. Stoltz / S&S)

While base officials say the number of incidents involving Yokota Air Base personnel in the "Bar Row" area (pictured here) has decreased since a 1 a.m. to 6 a.m. restriction went into effect in May 2005, some local residents feel there still is a problem with noise and littering in the area. (Christopher B. Stoltz / S&S) 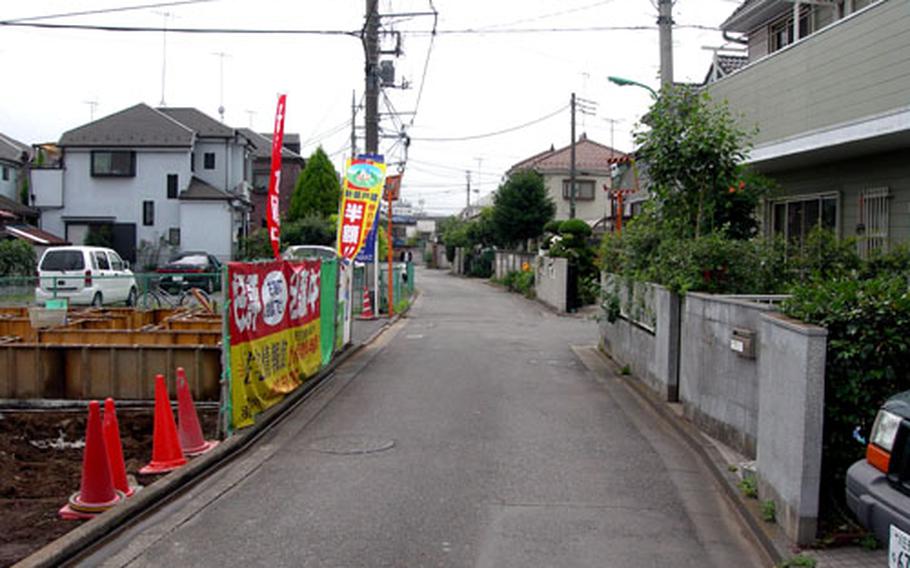 YOKOTA AIR BASE, Japan &#8212; It&#8217;s late on a Friday night &#8212; a payday weekend, to be precise. And several groups of servicemembers from Yokota are heading off base to spend their hard-earned cash at local establishments.

Most stay reasonably quiet, laughing and talking with their friends, saving their energy for karaoke or the dance floor.

But others shout and carry on in the street, talking loudly and crudely, seemingly unaware that only a few feet away, local residents are trying to sleep.

Some started drinking back at the base and now are carrying bottles of beer with them as they walk to their next bar. A few of these bottles will end up shattered in the street, left on a doorstep or in someone&#8217;s flower garden.

Such is the situation some Fussa residents face every weekend and have come to accept as just a fact of life, the cost of living between Yokota and &#8220;Bar Row,&#8221; the popular off-base entertainment district.

While base officials have said the number of off-base fights and other such incidents involving Yokota personnel in the Bar Row area has decreased dramatically since a 1 a.m.-to-6 a.m. restriction went into effect in May 2005, some local residents feel there is still a problem with noise and littering in the area.

&#8220;It has gotten better than before,&#8221; when there were more late-night partying Yokota residents in the area, said Fukuzo Takeuchi, a longtime Fussa resident and liquor store owner. But he said he still notices some Americans being loud on the streets, though he maintains it does not bother him.

Not so with other residents, one of whom wrote base commander Col. Scott Goodwin to complain.

&#8220;Every night we watch drunken members making their trek downtown shouting, screaming and carrying on like it was frontier town in the Wild West; only to return even more inebriated throughout the night and well into the morning &#8212; being more belligerent and louder than ever,&#8221; the unnamed Fussa resident wrote in a letter obtained by Stars and Stripes that had circulated throughout the Yokota command.

Goodwin forwarded the letter to unit commanders and first sergeants with his own comment, stating that he wanted the leaders to &#8220;continue to stress to all personnel the importance of being respectful of others in both the on and off base communities.&#8221;

After Stripes received the letter, two reporters and a photographer observed the late-night scene and talk to residents.

Yuriko Wakana said she notices people talking loud and throwing garbage onto her property, especially in the early morning on Saturdays and Sundays. She also notices Americans parking in the reserved parking lot near her house without permission.

Wakana, who lives close to the street, also said Americans who play loud, thumping music in their cars trouble her.

About three years ago, some local residents said they were tired of Americans trespassing, urinating in front of people&#8217;s houses, throwing or removing residents&#8217; plants, leaving beer bottles or smashing them on the sidewalks, ringing doorbells and shouting late at night almost every weekend.

When the residents voiced their concerns, the city requested the base take measures, said Yoshiro Watanabe, a Fussa city official who deals with base affairs.

Since that time, which includes the enactment of the Bar Row restriction, the city has received few complaints from people about noise or other problems, Watanabe said.

The restriction prohibits all Yokota servicemembers from being within a block of Akasen-dori &#8212; which lies near Honcho-dori and Fujimi-dori between the base and Fussa Train Station &#8212; between 1 a.m. and 6 a.m. every night.

Capt. Warren Comer, a base spokesman, said the base has received mostly good reports from Fussa&#8217;s mayor and police offices.

He said base leaders dressed in civilian clothes do sweeps of the Bar Row area to prevent incidents. A base offer to conduct uniformed patrols was declined by the local government, Comer said.

One Japanese police officer on duty through the night of June 29 at his station across the street from Yokota&#8217;s Fussa Gate said he had received no complaints from neighbors as of early morning June 30.

Many residents Stripes talked with said most of the noise and rowdiness from Americans takes place between 3 and 5 a.m. on Saturday and Sunday mornings as bars begin to close and people head back to the base.

But Wakana said most of the Americans who pass by her home are polite and friendly.

Some residents said it is hard at times to tell who leaves garbage at night and that the local Japanese at the bars also become loud when drunk.

Regardless of who is causing the noise, Comer said the base is constantly stressing to base personnel the importance of good conduct and the need to display &#8220;unwavering professionalism,&#8221; an oft-repeated standard set forth by Lt. Gen. Bruce A. Wright, U.S. Forces Japan commanding general.

&#8220;By being mindful of your behavior when you are outside the base and recognizing that as a member of the military you are held to a higher standard than most, servicemembers will, through their actions, only increase the amount of good will between the Americans at Yokota and the local Japanese community,&#8221; Comer said.

On two Friday nights, June 22 and June 29, Stars and Stripes reporters observed the residential area between Yokota&#8217;s Fussa Gate and Bar Row. Some of the things they saw and heard:

11:25 p.m. A group of six heading out of Fussa Gate walks by, shouting loudly. Two smaller groups pass by talking much more quietly.

11:27 p.m. Another group of six walks toward Bar Row talking loudly and swearing.

11:35 p.m. With bottles of beer in hand, a group of eight visibly drunk people head toward Bar Row, shouting and cursing. They can be heard well after they walk out of sight.

11:45 p.m. Another group of eight walks toward Bar Row. One individual is shouting loudly and swearing.

11:50 p.m. A car with base tags passes by with music playing loudly. The passengers are holding alcoholic beverages out of the windows. One passenger shouts profanities.

2:00 a.m. Four people walk from Bar Row toward the base talking quietly and keeping to themselves. Crossing the train tracks, one of them stops and throws a beer bottle on the tracks.

10:17 p.m. A car with base tags pulls into one of the parking lots reserved for local residents and parks along a fence at the side of the lot, not in a designated parking space. A couple gets out and heads to Bar Row.

10:20 p.m. A sport utility vehicle with base tags passes by with extremely loud bass playing.

11:25 p.m. A group of girls walks by talking and laughing very loudly.

1:05 a.m. Another group of eight people leaves the base, talking loudly and swearing.

1:20 a.m. A group coming from the base heads to Bar Row. One member of the group stops and has a brief but loud and profane conversation on his phone trying to convince another friend to meet up with them at Bar Row.

1:30 a.m. A group heading back to the base from Bar Row stops briefly while one person steps aside and urinates behind a house.

2:15 a.m. Two people talking very loudly and using profanity head from the direction of Bar Row to the base.

3:50 a.m. A group of eight people heads back from Bar Row to Yokota, walking in the street and shouting. Upon seeing three people with notepads (Stripes staff) sitting and watching, they immediately become quiet and begin walking on the sidewalk.