‘Nobody’s looking for a war,’ Dunford says in Seoul 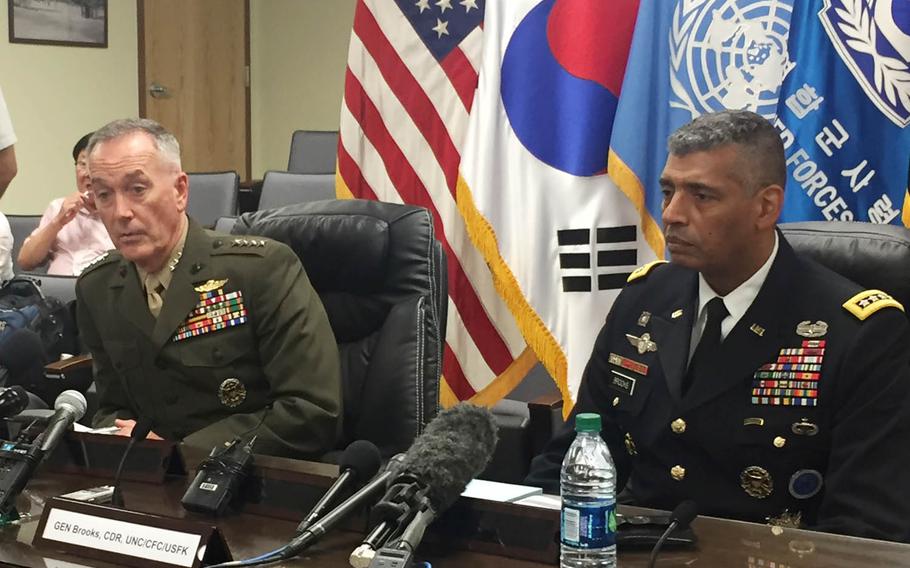 But Gen. Joseph Dunford, chairman of the Joint Chiefs of Staff, expressed hope that diplomatic and economic pressure would force the communist state to curb its nuclear weapons program.

“The military dimension today is directly in support of that diplomatic and economic effort,” Dunford told reporters after meeting with South Korean President Moon Jae-in in Seoul.

“It would be a horrible thing were a war to be conducted here on the peninsula, and that’s why we’re so focused on coming up with a peaceful way ahead,” said Dunford, a Marine whose father fought in the 1950-53 Korean War.

“Nobody’s looking for war,” he added, but stressed the military’s job was to provide “viable military options in the event that deterrence fails.”

Military preparedDunford’s comments came as all eyes are on Guam after North Korea’s state-run media said its army planned this week to finalize a plan to fire four missiles into waters near the U.S. territory. The blueprint would then be presented to leader Kim Jong Un for a decision.

Tensions also have skyrocketed as President Donald Trump has ramped up his bellicose rhetoric in a war of words with the North.

Trump has warned he’s ready to unleash “fire and fury” against North Korea if it continues to threaten the U.S.

Guam, an island in the Pacific Ocean, is home to two major military bases and a population of about 160,000.

Dunford said it’s important “that the Korean people and the American people know that we are capable of protecting them right now against a limited attack and certainly prepared to respond in the event that deterrence fails.”

His remarks echoed the cautious language of an op-ed by Defense Secretary Jim Mattis and Secretary of State Rex Tillerson in the Wall Street Journal as senior U.S. officials try to tamp down fears of military conflict.

In language clearly aimed at North Korea and its economic lifeline China, Mattis and Tillerson stressed the U.S. “has no interest in regime change or accelerated reunification of Korea.”

South Korea’s president, meanwhile, urged North Korea to quickly return to dialogue, breaking his silence after a week of threats from both Trump and the North.

"President Moon denounced North Korea, saying the country was disturbing peace on the Korean peninsula and in the region, as well as the global order, by moving ahead with its test launches of missiles with an intercontinental range," presidential spokesman Park Soo-hyun said of the meeting with Dunford.

The annual military exercise known as Ulchi Freedom Guardian is slated to begin on Aug. 21, raising fears that will further antagonize the North Koreans who view it as a rehearsal for an invasion.

“The exercises remain important to us and we’ll continue to move forward,” Brooks said during the press conference inside USFK headquarters at Yongsan Garrison.

The U.S. has about 28,500 servicemembers stationed in South Korea but increases its presence during the drills, which are mainly composed of computer simulations.

Dunford also said he reaffirmed that Washington maintains its “ironclad” commitment to the alliance that has bound it with South Korea since the war ended in an armistice instead of a peace treaty.

But fissures appeared to be emerging amid worries that Trump is going too far with his bellicose statements.

Over the weekend, a South Korean presidential adviser said the rhetoric was worrisome and fueling the crisis.

“This is very unusual. We do not expect that the president of the United States would make that kind of statement,” Moon Chung-in told ABC News in an interview on Sunday. “It is a chicken game, but I think what is needed right now is mutual restraint.”

He also criticized the Trump administration for a lack of clarity about its North Korea policy.

“I really don’t see a unified message,” Moon Chung-in said. “We are very much confused. We think the American government has moved from ‘strategic patience’ of the Obama administration into strategic confusion.”

Strategic patience is the term used for ex-President Barack Obama’s policy toward the North, which relied on punishing economic sanctions and diplomatic pressure. Trump has declared that policy dead, but many of his administration’s moves have been similar, including drafting a recent U.N. resolution that imposed tougher sanctions against Pyongyang.

Moon Chung-in said his boss had asked Trump to tone down his rhetoric when they spoke on the phone last week, according to the network. But that was followed by more fiery statements.

China visitDunford, who arrived in Seoul on Sunday, also met with Defense Minister Song Young-moo and other senior officials before leaving for China.

He praised Beijing for signing on to two recent U.N. resolutions that tightened economic sanctions against the North but said he would raise the need to do more to enforce the punishing measures.

“In order for us to denuclearize North Korea, it’s gonna require China not only … to vote for sanctions but to enforce those sanctions,” he said.

Dunford also said an important item on his agenda in China would be to discuss “military to military relations that will result in mitigating the risk of miscalculation and making sure that we have the ability to communicate in a crisis.”

China has grown increasingly frustrated with Pyongyang but fears exerting too much pressure may cause a regime collapse that could create a humanitarian crisis on its border.