‘No touching’ rule at Bahrain base elementary school bans high-fives, games of tag — for now 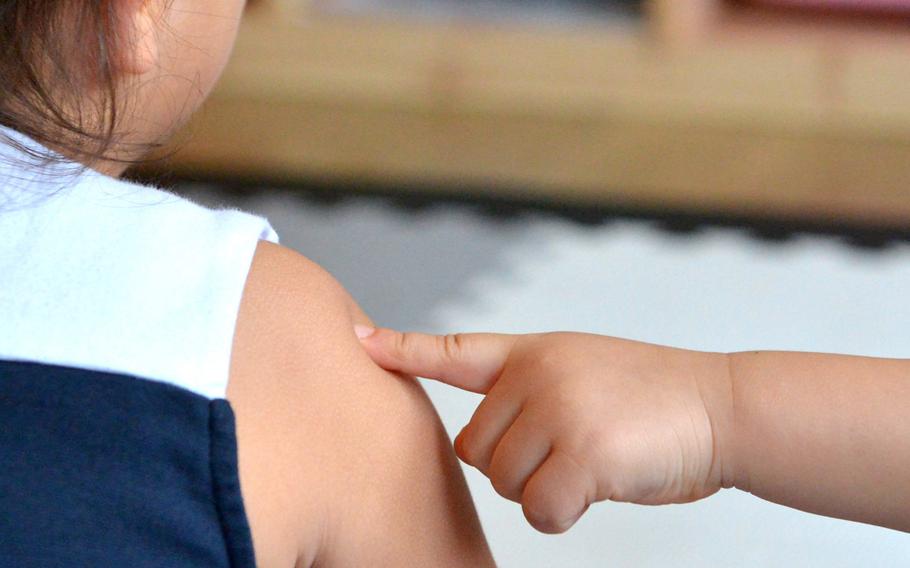 A rule enforcing a No Body Contact policy at Bahrain Elementary School is leaving parents with questions and students without high-fives and hugs. The school's principal says it is a temporary measure as they develop a more comprehensive plan. (JOSHUA KARSTEN/STARS & STRIPES)

A rule enforcing a No Body Contact policy at Bahrain Elementary School is leaving parents with questions and students without high-fives and hugs. The school's principal says it is a temporary measure as they develop a more comprehensive plan. (JOSHUA KARSTEN/STARS & STRIPES) MANAMA, Bahrain – A strict “no touching” rule that went into effect last week at Bahrain Elementary School has kept grade-schoolers from giving each other hugs and high-fives, prompting some parents to question the policy.

Some parents shared their frustrations online last week in an informal questionnaire that’s been sent to administrators. But school officials insist that the temporary rule is a step toward developing a comprehensive policy that allows some forms of physical contact.

Friction over the policy underscores a broader debate over several years in U.S. schools regarding both children’s rights – a concept steeped in United Nations conventions that calls for children’s mental, physical and psychological security – and how children learn and develop through physical contact.

In Bahrain, the new rule banning things like games of tag and hand-holding and its punishment — brief timeouts — was outlined for students at an assembly on Jan. 30. It’s a response to “frequent incidences with children touching, pushing and such to one another” at recess, an email sent to parents the same day said.

“For example, the game of tag often gets rough or children don’t realize how their tap is interpreted as a push,” Penelope Miller-Smith, who is in her first year as the school’s principal, said in the email. “While many of these incidences are not intentional, children are being hurt or feel like they are being hurt.”

Matt Hansen, father of a fifth-grader, attended the assembly and said he understands why the No Body Contact, or NBC rule, came about. He saw recess behavior get “out of hand” last semester, he said.

“It was becoming difficult for the monitors,” Hansen said in an email. “My hope is that this new NBC rule can be a temporary measure that will help the children better understand the concept of personal space, and eventually the rule can be phased out.”

Other parents were caught off-guard after learning of the policy only via email or from their children after the assembly.

“It came out of nowhere,” said Carmen Sunderland, mother of a fourth-grader and a kindergarten student. “I send my kids to school to learn — and recess is part of it — how to play, socialize the right way and help them make right choices while playing.”

Those lessons are part of a longer-term plan, Miller-Smith told Stars and Stripes in an email. The new rule is not designed to be permanent nor will it be a “never touch” policy, she said, but is the first part of a larger initiative to “help reduce touching that is hurtful, unwanted and in some instances misunderstood.”

Such rules are a typical response at Department of Defense Education Activity and stateside schools, Miller-Smith has told parents. Miller-Smith, a career educator, said she’s often seen cyclical increases in rough play in the long stretches of the second semester.

“The pattern repeats itself for me annually in almost all schools,” she said.

Her plan calls for teachers to discuss the issue with the students in coming weeks, using picture books, group discussions, class lessons and other activities to help develop a policy on appropriate physical contact, such as helping someone up after a fall, giving a hug or a high-five, the principal said. She’s participated in similar efforts in the past and has seen “great success,” she said.

A 50-page student-parent handbook at the school had already prohibited horseplay, fighting and shoving on school grounds and buses, but Miller-Smith told parents that the lack of “a common and simple definition” for what’s allowed makes enforcement difficult. The NBC rule is meant to eliminate misunderstandings and keep play from getting out of control, she said.

Though her email to parents described it as barring “any touching to peers,” Miller-Smith told Stars and Stripes the new rule isn’t meant to discourage courtesy and kindness, like shaking hands or offering help to others.

But Theresa Tamash’s daughter, a third-grader, was upset at what she saw as a ban against hugging her friends, Tamash said. The 8-year-old explained the policy to her mother after the school assembly.

Tamash created an online questionnaire that garnered 47 anonymous responses in two days — 30 of them opposed to the new rule — a share of the parents of the 300 enrolled K-5 students at the school.

“A lot of people said, ‘I don’t like it,’” Tamash said. “I was hoping to give those parents an opportunity to share their opinion.”

The survey also allowed parents to suggest alternatives, such as adding more playground monitors or focusing efforts on children who are misbehaving rather than making a blanket policy, Tamash said. For her part, Tamash has volunteered to help at the school, but she said she’s never been asked to assist during lunch or recess.

“No one’s ever said, ‘We need more help on the playground … We need more eyes in the cafeteria,’” she said.

Tamash sent the parent responses to her questionnaire to the school on Monday and Miller-Smith said she planned to talk with her. But the principal stood by the rule, saying she’d received positive feedback from others.

While he favors the policy and sent a note to Miller-Smith saying he understands why it’s needed, Hansen said in his email to the school that the NBC rule has drawbacks.

“I have to be honest with you and let you know that our son misses being able to play tag and ‘cops and robbers’ during recess,” he wrote.