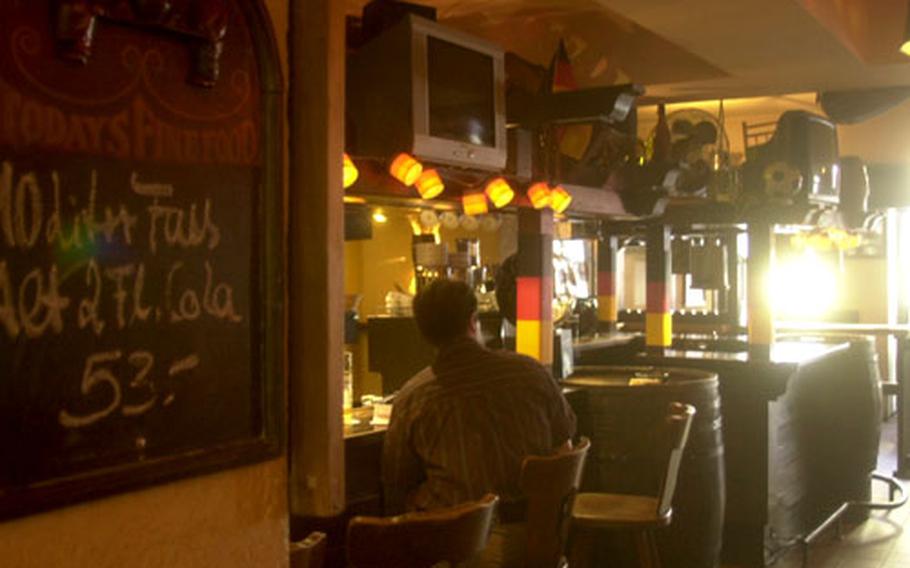 Hannen Fass, a traditional German bar/restaurant, has been decorated in Germany’s colors and also features flags from other countries participating in the World Cup. Several TVs provide good views of the games. (Steve Mraz / S&S)

Hannen Fass, a traditional German bar/restaurant, has been decorated in Germany’s colors and also features flags from other countries participating in the World Cup. Several TVs provide good views of the games. (Steve Mraz / S&S) 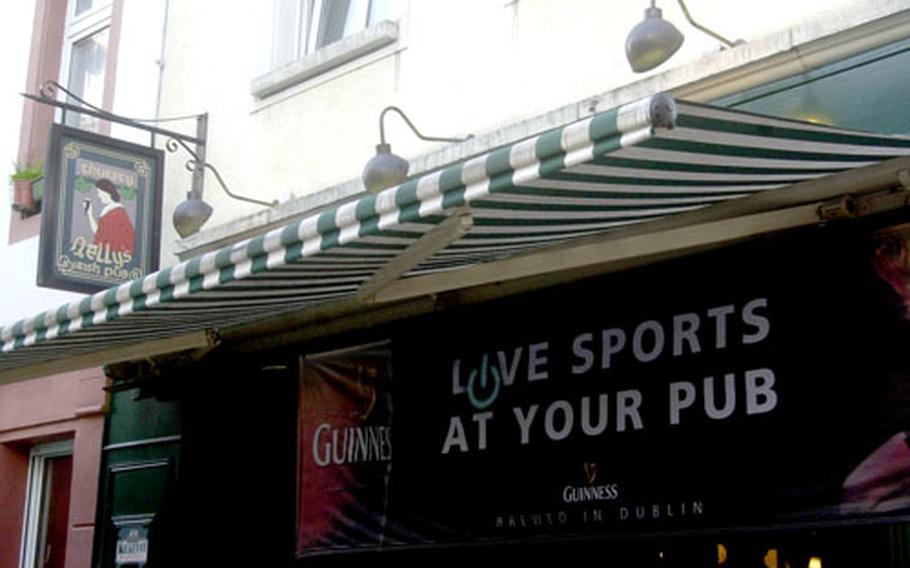 Thursty Nelly’s in downtown Kaiserslautern, Germany, has a schedule of all the World Cup games on the front door. Games will be shown on a big-screen TV. (Steve Mraz / S&S)

The singer/actor loved by Germans is not among the 600 live acts scheduled to perform in Kaiserslautern during the World Cup. We know you&#8217;re crushed.

But there are plenty of entertainers who will be there, many at the free fan fest.

Still Collins, a Phil Collins and Genesis tribute band, and Ringo Ska, which plays ska and reggae versions of Beatles songs, are among the performers who will be in town.

Those who weren&#8217;t fortunate enough to get tickets to the games can still watch the matches and join the festivities surrounding the games. And since American Forces Network will not be airing the action, those who cannot pick up local TV broadcasts will have to leave the house to watch the pitched battles that come around once every four years.

Below is a sampling of K-Town bars and events that should be great places to view games.

Brauhaus am Markt, Stiftsplatz 2. Yanks Abroad, a Web site that tracks U.S. soccer players around the world, is offering all-you-can-drink Red, White and Brew parties at the Brauhaus for $20 or 15 euros Friday and Saturday. The event goes from 5:30-11:30 p.m. each night. Big-screen TVs will show the games. The Brauhaus brews its own beers, which we hear are quite tasty.Chuck&#8217;s Diner, Steinstrasse 24. The bar where members of the U.S. men&#8217;s soccer team partied after their March 1 win against Poland in Kaiserslautern is a favorite among Americans, with quite possibly the funniest proprietor in the area. Former airman Chuck will offer you a free beer after every U.S. goal scored during the World Cup. For 12 euros, you can buy a T-shirt that reads &#8220;What World Cup? I was at Chuck&#8217;s.&#8221; Flat-screen TVs to show the games. Outside seating available.Hannen Fass, St. Martins Platz. This bar/restaurant is what you think of when you imagine a traditional German watering hole. Lots of dark wood, some wood barrels and exposed copper pipes around the bar. For the World Cup, it&#8217;s been decorated with German and international flags. Several TVs provide good views of the games.Pulaski Park, Pulaski Barracks. To watch the U.S.-Italy World Cup game Saturday in a family atmosphere, head over to Pulaski Park where the U.S. Air Forces in Europe Band kicks things off at 1 p.m. The festive event will have pony rides for the kids and rock-climbing for adults. The game will be shown live on a jumbo screen at 9 p.m. Things heat up later in the evening with performances by Thund Her Struck, an all-girl AC/DC tribute band, and rockers Sofa King.Thursty Nelly&#8217;s, Steinstrasse 19. Your typical Irish pub &#8212; it serves Guinness on tap by native English speakers. This place is definitely geared up for the Cup with a schedule of all the games on the front door. You can almost feel the anticipation as you walk in. Plans to show games on a big-screen TV.World Cup Mile, downtown Kaiserslautern. If you want to watch the games in an open-air area with about 30,000 others, check out the large screen viewing areas near the World Cup Mile. Roughly 600 live acts will perform in areas along the mile in the heart of downtown Kaiserslautern through July 9.But alas, no Hasselhoff.