No slowdown in naval deployments, says chief of naval operations 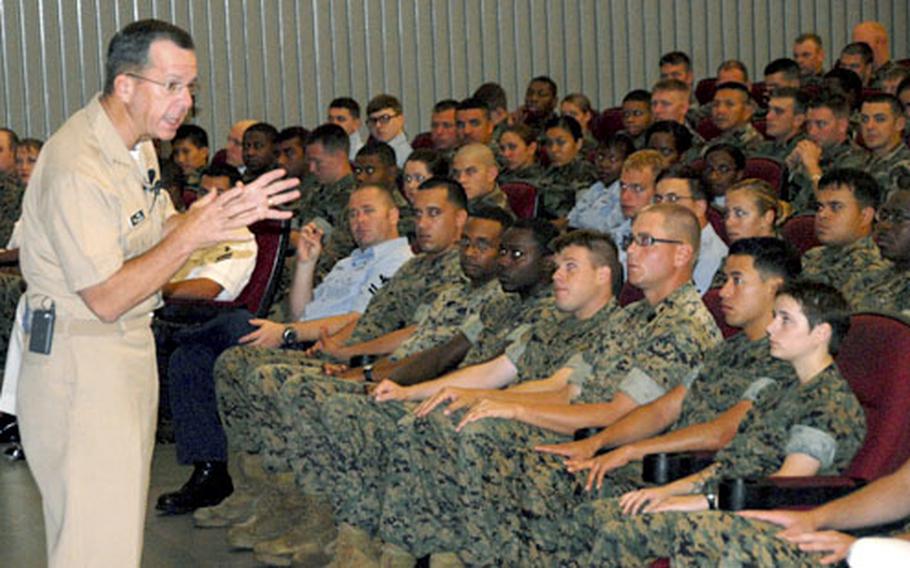 CAMP FOSTER, Okinawa &#8212; There will be no slowdown in naval individual augmentee deployments, but sailors can expect them to play an important part in promotions and assignment selections, the chief of naval operations told a group of Okinawa-based sailors Monday morning.

Mullen was on the island for the last stop of his Asia tour that took him to Kuala Lumpur, Malaysia, and Jakarta, Indonesia, among other cities. He took questions from enlisted sailors and officers after speaking to the groups separately.

Rotation and deployment issues were a hot topic among both groups. Mullen said individual augmentee deployments aren&#8217;t &#8220;going to go away,&#8221; but the Navy is in the early stages of making sure they&#8217;re considered important during the promotion process.

Thousands of individual augmentees are deployed around the world, but Mullen said he thinks it isn&#8217;t the figures that cause concern among sailors but rather the uncertainty associated with it. &#8220;They think &#8216;is my number coming up?&#8217;&#8221; he said.

There also is a possibility individual augmentees&#8217; dependents will be able to move back to their families while the augmentee is deployed, he added. There are no plans, however, to have the augmentee permanently change duty stations and give the unit that lost the manpower any relief, Mullen said.

Mullen also talked about how the Pacific is a critical area and the fleet over here must maintain continuous readiness to ensure stability, especially in light of North Korea&#8217;s recent actions. &#8220;One of the real threats in the future is the proliferation of ballistic missiles,&#8221; he said.