No slow shift at ‘Baghdad ER’ 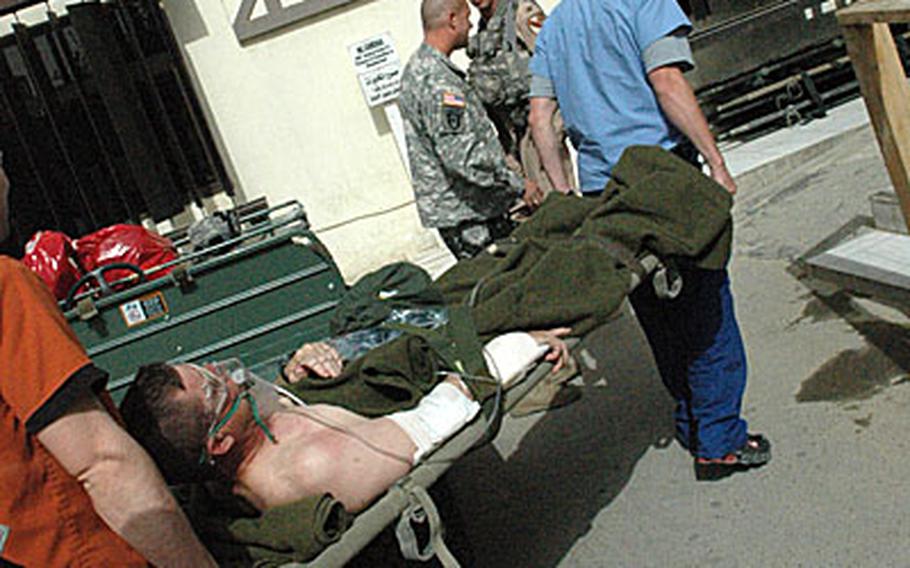 Medics carry a soldier into the emergency room of Ibn Sina Hospital after he was injured in a mortar attack and flown to the Baghdad Green Zone hospital recently. (Monte Morin / S&S) A U.S. Army flight nurse shields a wounded soldier&#39;s eyes from the sun as medics drive him from the Ibn Sina Hospital landing zone to the emergency room. (Monte Morin / S&S) 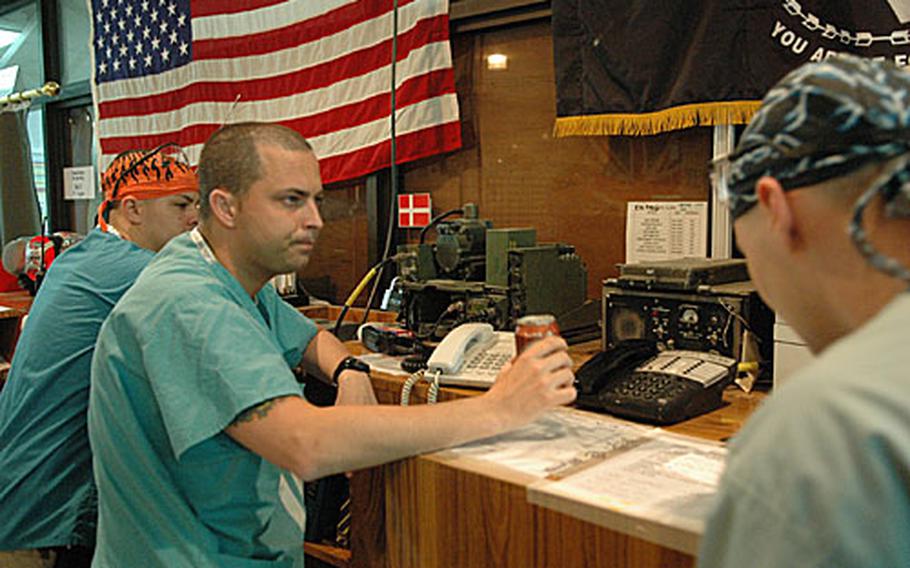 U.S. Army medic and Staff Sgt. Chris Hensley, 29, of Wichita, Kansas, center, grimaces as he listens to a radio announcement of incoming wounded at the emergency room. (Monte Morin / S&S)

A nurse picks up.

&#8220;You&#8217;ll have to make way,&#8221; another nurse tells several soldiers lying in beds who were examined and deemed to be OK for now. They tiredly get to their booted feet and make room for the new patients.

Patients come in by helicopter, by tank, by Humvee. They walk, limp, are brought in by stretcher.

The emergency room generally is warned about a minute &#8212; or less &#8212; before the new patients start to arrive. Beds, IV tubes, drugs and bandages are readied. When the patients roll in, orderly chaos takes over.

The sights are not for the faint of heart.

On a recent day, an Iraqi interpreter was brought in whose legs had been blown off below the knee.

Delirious, he screamed and writhed as a team of people worked to ease his pain and calm him down. He was later brought upstairs to the operating room to have his legs cleaned, the dead tissue removed and the wounds dressed.

Ibn Sina treats U.S. and Iraqi army troops, some contractors, Iraqi civilians connected in some way to the military, Iraqi VIPs who would be unsafe at local hospitals, and the occasional Iraqi who shows up at its doorstep in dire condition. A couple of babies have been born here.

Suspected insurgents are treated here, too. Their eyes are bandaged so they can&#8217;t see anyone, especially interpreters, who are particular targets of violence. Some of the insurgents have spat at the medical staff, although a few are grateful for the care.

The hospital, run by the 28th Combat Support Hospital out of Fort Bragg, N.C., treated victims of last month&#8217;s attack on the Iraqi parliament. Flowers for those victims filled the hospital, so staff gave them to other patients. Victims, many of them children, of chlorine gas bombs also were treated at Ibn Sina.

The staff has managed to trim time for some tasks.

In the States, blood analysis can take from 20 to 40 minutes. Ibn Sina averages seven minutes, according to Staff Sgt. George Anderson, a lab technician.

With its relentless pace and severity of injuries, Ibn Sina is a good teaching tool.

Maj. Brian Krakover, an emergency room physician, normally works at Tallil but was spending a couple of weeks at Ibn Sina to keep his skills sharp.

Maj. Renee Alford, a nurse who worked in the ER before switching to surgery, said staff members become accustomed to the pace and scope of the injuries.

Sometimes the place seems more like a civilian ER. One evening saw an amiable contractor with a hernia, an Iraqi army soldier with a bad appendix, and a U.S. soldier who popped his left knee and couldn&#8217;t extend his leg.

Another day, the ER admitted a soldier who was stung on the finger by a scorpion while he was moving a sandbag. A Gatorade bottle, holding the now-dead evildoer, was passed around for everyone&#8217;s inspection.

Ibn Sina has developed a reputation for quality care, people say. It has burn, cardiac, oral and orthopedic surgeons, ophthalmologists, dermatologists and toxicologists, among other specialists.

One commander insisted on taking five of his charges, wounded by explosives, to Ibn Sina even though the staff was overwhelmed and wanted to divert them somewhere else, said Pfc. Michelle Chavez, 29, of Huntington Beach, Calif.

Some physicians say they thrive on the rigorous pace at the ER. But Lt. Cmdr. David Moulton, a psychiatrist temporarily working at Ibn Sina, says he sees ER staff members suffering from combat stress fatigue.

What&#8217;s worse, he says, is that Ibn Sina is a fishbowl where the staff works and lives in dormlike accommodations.