No shortcuts in Chinese language classes 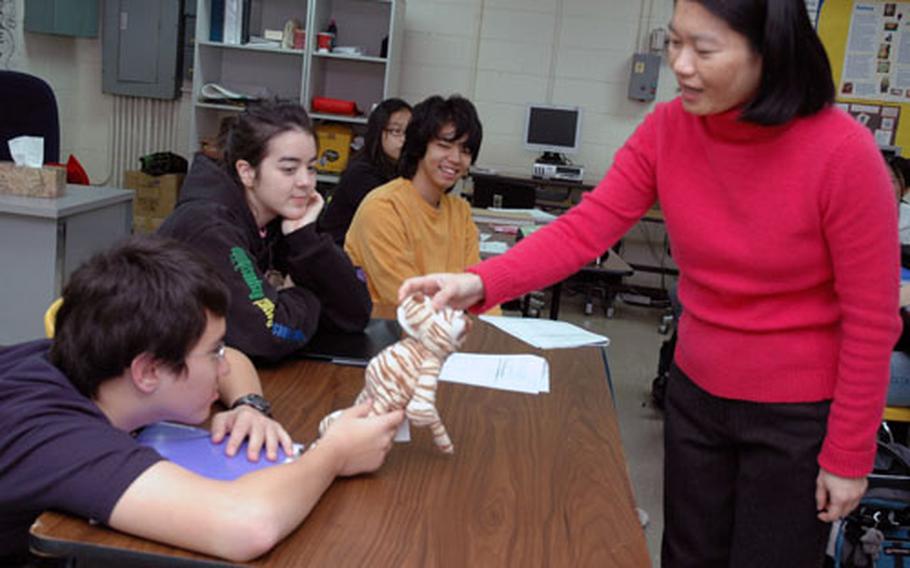 Chyong-yng Chang is in her second year teaching Mandarin to middle and high school students on Yongsan Garrison in Seoul. This first-year class has mostly middle school students, and she uses fast-paced games to keep them working. Here, she gives a student a tiger. The student must answer a question in Chinese, then toss the stuffed animal to a peer and continue the conversation. (Teri Weaver / S&S)

Chyong-yng Chang is in her second year teaching Mandarin to middle and high school students on Yongsan Garrison in Seoul. This first-year class has mostly middle school students, and she uses fast-paced games to keep them working. Here, she gives a student a tiger. The student must answer a question in Chinese, then toss the stuffed animal to a peer and continue the conversation. (Teri Weaver / S&S) 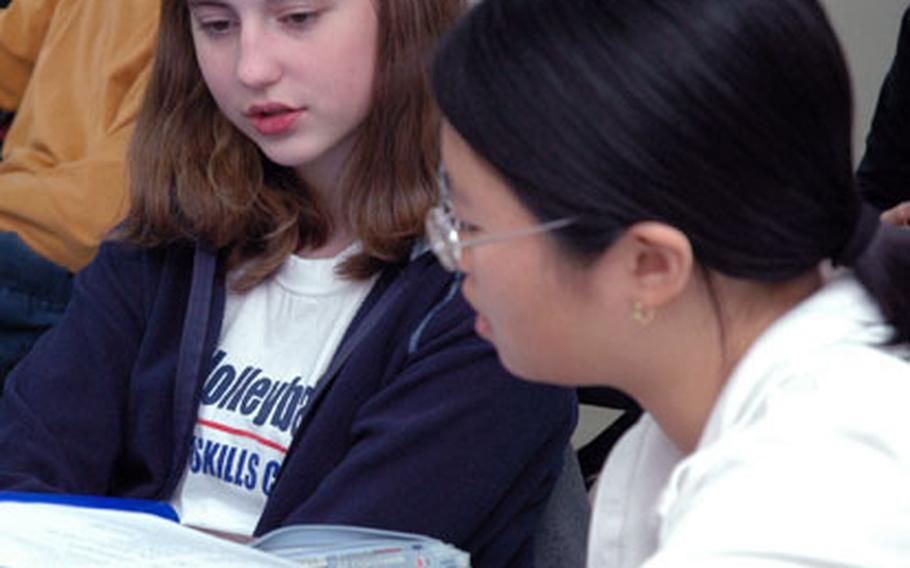 Jenna Weida, left, and Anna Kim practice conversation in Mandarin earlier this month in their Chinese language class at Seoul American High School. Jenna and Anna are eighth-graders, but they and many other middile school students go to the high school for the class. The Chinese program is in its second year at on-base schools in the Pacific, and so far it&#39;s showing a steady following. (Teri Weaver / S&S) Erica Na (standing) looks at a video clip of herself doing a skit in Mandarin Chinese. Na and Christine Moon (seated) Worked on their project earlier this month during their Chinese II class at Seoul American High School. (Teri Weaver / S&S)

YONGSAN GARRISON, South Korea &#8212; Rachel Hunt&#8217;s last trip to China with her family was a treasure hunt of sorts.

&#8220;I would know it,&#8221; the 15-year-old Seoul American High School sophomore said excitedly, remembering spotting the pictorial, kanji symbols on signs and menus that she could translate into directions and meals.

&#8220;It,&#8221; in Rachel&#8217;s parlance, is Mandarin, the official spoken language in the People&#8217;s Republic of China. Rachel and nearly 200 other students at middle and high schools on military bases in the Pacific are taking Mandarin, part of a push in the United States to teach children languages that better match today&#8217;s global politics and economies.

Spanish reigns as the most popular foreign language in the Pacific, with 2,960 students enrolled this fall. Still, the Mandarin program has sparked a steady and growing interest, school officials say.

In her first year teaching at Seoul American, Chyong-yng Chang taught 67 students in three classes. Last fall, nearly half of those students enrolled for second-year studies, she said.

At Kadena, Jackson saw similar interest. His first year, he taught one Chinese class. This year, he has five classes with a total of nearly 60 students.

Linguists call Mandarin a &#8220;fourth category&#8221; language, meaning it&#8217;s one of the hardest for nonnatives to master, Chang said.

Memorization is needed to learn the characters. Precise listening and pronunciation are needed to distinguish among the language&#8217;s various tones, which can bend sounds so distinctly that the word &#8220;ma&#8221; can end up meaning, among other things, a mother or a horse.

The programs in the Pacific schools are open to seventh- through 12th-graders, and the classes can include students who span the age differences.

Yet she fits right in as the editor of a 60-second video that showcases dialogue between two of her high school classmates, juniors Erica Na and Matthew McCoy. Their skit involves an invitation to a birthday party.

Matthew, 16, says he hopes to continue studying Chinese in college. Erica, also 16, wants to add Chinese to her multilingual vocabulary. Having multilingual students is an advantage in the overseas school system, Chang says.

Another is the schools&#8217; proximity to China itself, Jackson says.

Last spring, Jackson and some Kadena students traveled to Taiwan for five days. Another trip is planned in 2008. Airfare, hotel, meals and other fees were about $500 per person, he said.

Chinese is gaining on other languagesThe Department of Defense Education Activity is in its second year of offering Mandarin Chinese in select secondary schools. So far, the program has attracted a steady following of students, according to Angela Davila, DODEA foreign language coordinator.

&#8220;Finding teachers is our main challenge,&#8221; Davila said. &#8220;But we&#8217;ve been very fortunate to find excellent teachers and new materials. The selection is not as comprehensive as other commonly taught languages, but we have found good materials.&#8221;