No rioting so far, but pickpockets make presence known at World Cup 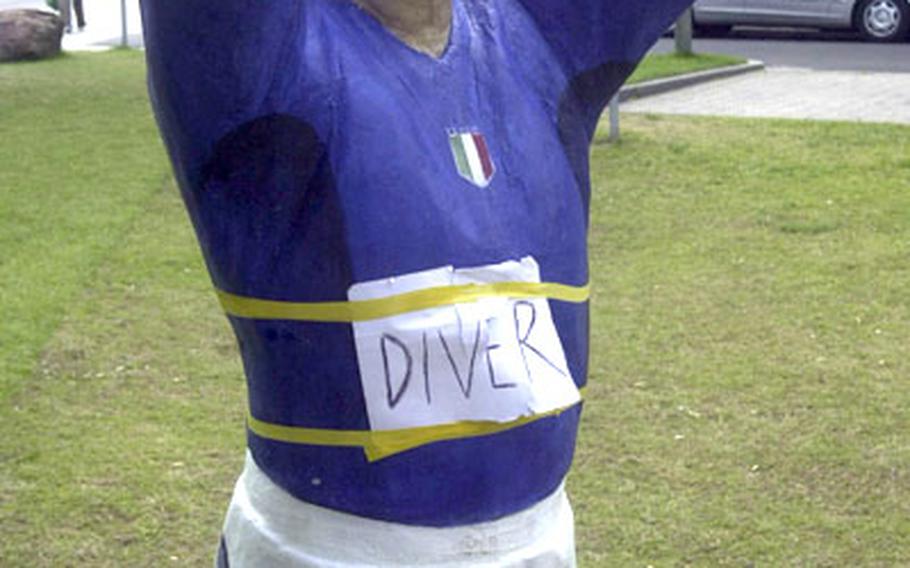 Temporary graffiti was placed on the torso of an Italian soccer statue outside the Kaiserslautern police headquarters. Apparently from the graffiti, some fans believe an Italian player in Monday’s game against Australia dived instead of being fouled. (The sign says "diver.") (Steve Mraz / S&S)

Kaiserslautern, the smallest of the 12 World Cup host cities, has been putting up some big numbers as released by the city&#8217;s police department.

Of the 44 people arrested in the Kaiserslautern area so far during the World Cup, four have been American, said Christiane Lautenschl&#228;ger, Kaiserslautern police headquarters spokeswoman.

On four of the five days that World Cup games took place in Kaiserslautern, 2,000 police officers patrolled the city streets. On June 17, for the U.S.-Italy game, 2,200 police officers were out in force because of the &#8220;special security situation,&#8221; according to a police news release.

The riots and unruly fans sometimes associated with soccer have not materialized in Kaiserslautern. Crimewise, pickpocketing appears to be the biggest problem. So far, a total of 153 such incidents have been reported on the five days when World Cup games were played in the city.

Seventy-four incidents of pickpocketing were reported to city police on Monday, which was the day Italy played Australia. Monday also was the final day a World Cup match was played in Kaiserslautern.

Friday will be another big day as Germany faces Argentina, its toughest opponent yet. The 5 p.m. game will be shown live at the public viewing areas in downtown Kaiserslautern.

If you plan to travel to Kaiserslautern for the game, Heeling advised getting there by bus or train. So far, people have relied heavily on the train.

On June 17, more than 29,000 people passed through the Kaiserslautern train station, according to a police news release.