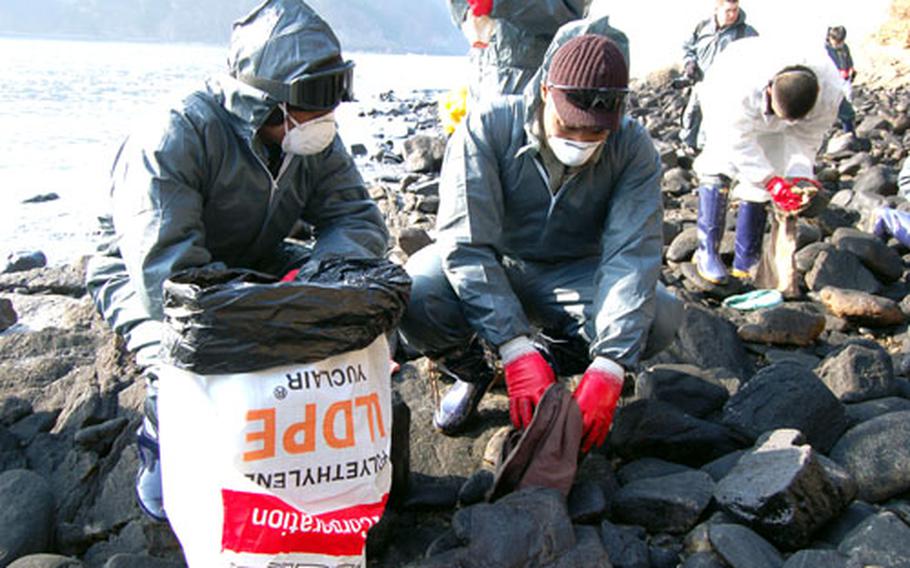 Staff Sgt. Anthquian Brunnitt, right, and Staff Sgt. Billy Swanigan, both of the United Nations Command Honor Guard, scrub the oil from rocks on Baeknipo Beach on Dec. 19. An 8th Army spokesman confirmed Thursday that none of the roughly 200 U.S. troops who volunteered to assist with the clean-up have reported any illnesses relating to their on-site work. (Jimmy Norris / S&S)

SEOUL &#8212; Eighth Army volunteers who helped clean up South Korea&#8217;s worst-ever oil spill appear to have escaped illnesses that have been reported by local volunteers, a command spokesman said Thursday.

According to local news reports, South Korean environmentalist group Green United and the Environmental Medicine Research Center of Korea University surveyed 211 volunteers on Dec. 15 and Dec. 16. About half reported symptoms including strong headaches, respiratory problems, vomiting, nausea, dizziness and fatigue, according to findings.

But groups of 8th Army soldiers who scrubbed rocks and moved garbage apparently were unaffected by the work. Over six days concluding Dec. 24, about 200 soldiers volunteered.

&#8220;At this time there are no reported injuries or illnesses directly associated with the cleanup efforts,&#8221; 8th Army spokesman Maj. Jerome Pionk said in an e-mail to Stripes. &#8220;Every foreseeable precaution was taken with our soldiers &#8230; and chains of command are aware that should the need arise we will ensure that any reporting illnesses will be cared for appropriately.&#8221;

The Army briefed its volunteers on the dangers of excessive contact with oil, which officials blamed for the Korean volunteers&#8217; illnesses.

Soldiers were shown slides of oil-soaked South Koreans, some wearing only gloves and rubber boots. Then the soldiers were issued protective gear, gloves, boots and face masks. They were told to replace oil-fouled masks and to wash their hands after working and before eating.

Their exposure to the oil spill also was noted in their medical records.

The spill occurred Dec. 7 after a barge came free of its tugboat and collided with a Hong Kong supertanker seven miles from shore. Some 10,500 tons of oil were spilled along South Korea&#8217;s western coast.

On Thursday The Associated Press reported that the captains of the barge and its tugboat, identified only by the family names Kim and Cho, had been arrested and charged with professional negligence and violation of ocean pollution laws.