No radiation found yet at crash site 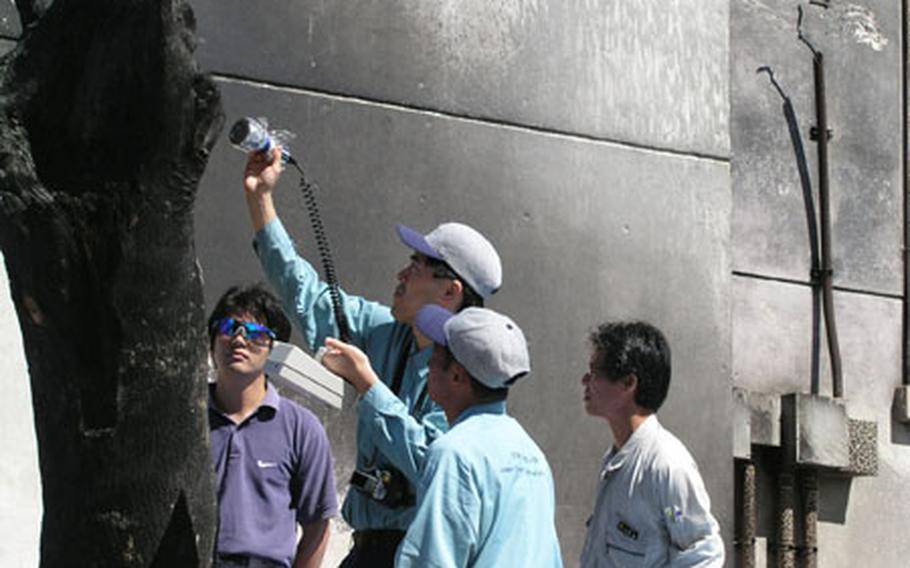 Surveyors with the Japan Analysis Center use a Geiger counter Tuesday to inspect a charred tree stump at the site where a Marine helicopter crashed on the grounds of Okinawa International University Aug. 13. A survey is being made of the area to check for any contamination from the wreckage. (Chiyomi Sumida / S&S)

Meanwhile, a Japanese company began surveying air and soil in the area where a Marine helicopter crashed Aug. 13 to ensure they&#8217;re not contaminated by hazardous materials, including a low-level radioactive isotope used in a rotor safety device.

So far, no trace of radiation has been detected, a company spokesman said.

The Marine CH-53D Sea Stallion crashed at Okinawa International University after its tail rotor malfunctioned. As the pilot fought to control the helicopter, Marine officials said, it hit the ground, its main rotors gouging the university administration building&#8217;s wall on the way down. The three crewmen were rescued before the aircraft burst into flames.

All three since have been released from hospital care and no civilians were injured.

Mayor Yoichi Iha, a long-time opponent of the busy base in the middle of Ginowan, presented the petition Monday to the Naha office of the Ministry of Foreign Affairs, Defense Facilities Administration Agency and Okinawa prefectural government. Most of the petition&#8217;s 55,726 signatures were collected during a city-sponsored protest rally Sunday at the university campus.

Besides demanding an early closure of the base, the petition insists Marines halt all air operations.

The Special Action Committee on Okinawa slated MCAS Futenma for closure in 1996 in an effort by U.S. and Japanese officials to reduce the U.S. military footprint on the island, a fifth of which is covered by American bases. Closing Futenma was part of a consolidation plan to reduce that footprint by 21 percent.

Futenma was to close within seven years if an alternate site could be found on Okinawa for Marine air operations. Political wrangling and protests by environmental and peace activists have stalled building a new air station in the waters off northeast Okinawa, at the village of Henoko and next to the Marines&#8217; Camp Schwab.

The Marine Corps has supported the idea of closing Futenma as long as it could carry out its air missions elsewhere on the island.

&#8220;The petition shows how big the impact of the accident was on the citizens of Ginowan,&#8221; he told Stripes on Tuesday. &#8220;Flight activity at the air station has been increasing, exposing our residents to extreme danger. The starting point of SACO was to remove the danger and it was agreed to close the air station within seven years. That deadline has long passed, while the danger continues to increase.&#8221;

Sadaaki Numata, the ambassador in charge of Okinawan Affairs at MOFA&#8217;s Okinawa Liaison Office, said the Henoko project still is the best alternative to Futenma.

&#8220;The policy of [the] government of Japan is to realize a move of the operations to Henoko as early as possible, to reduce burden of citizens of Ginowan,&#8221; he told reporters Monday. &#8220;I will convey the thoughts of citizens and people who participated in the rally and signed the petitions to the central government.&#8221;

The air and soil survey began Monday. U.S. officials have said any possible radiation exposure at the site would be minimal and would pose no risk to humans. A rotor safety device included six separate casings containing small amounts of a low-level radioactive isotope, strontium-90. Five of the six casings were recovered from the crash site.

A U.S. Embassy statement released last week stated evidence strongly indicated that the sixth case was &#8220;vaporized in the burnt and melted wreckage and is no longer identifiable.&#8221;

Workers with the Japan Analysis Center took readings Tuesday of the air and soil surrounding a charred tree stump at the crash site. The study was expected to be completed Wednesday. The survey is being conducted by the Marines, the university, and the Ginowan city and Okinawa prefectural governments.

&#8220;We are focusing on strontium-90 because one of the cases the helicopter was carrying turned up missing after the crash,&#8221; said Yoshihiro Ikeuchi, assistant director of the Planning Department of the Japan Analysis Center, based in Chiba prefecture.

&#8220;We have been monitoring air at the campus since yesterday and so far no abnormal readings have been recorded.

That is expected to take about a month.

&#8220;We hope that our survey will help to ease the anxiety among students, faculty and local community,&#8221; a spokesman for the university said. &#8220;We are receiving a lot of phone calls from parents who are worried about contamination, especially since a new semester is about to start.&#8221;