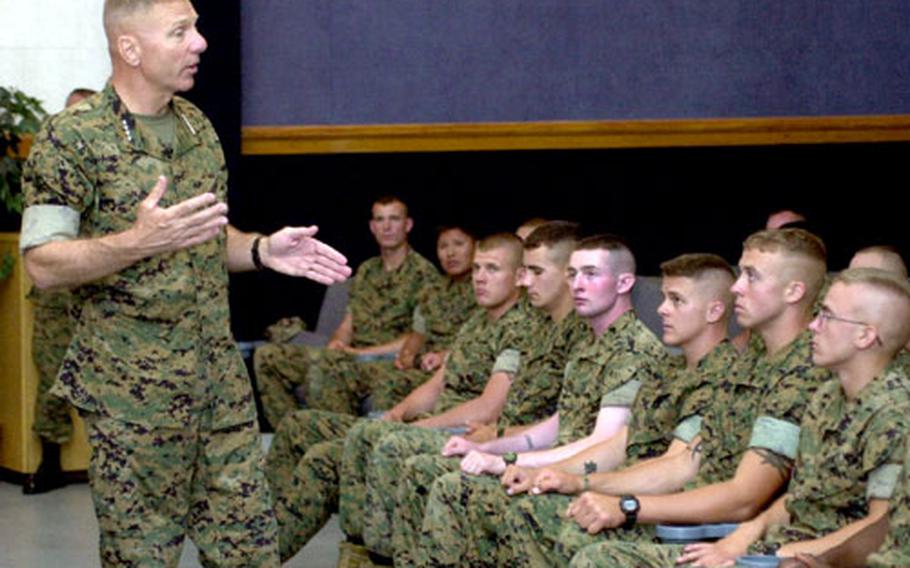 NAVAL STATION ROTA, Spain &#8212; The Marine Corps&#8217; top general said Tuesday that there are no plans to extend seven-month tours in Iraq despite reports that Marines could be there as long as a year.

&#8220;But right now, it is seven- month rotations for the infantry battalions and the squadrons, it&#8217;s about a year rotation for regimental headquarters, group headquarters, division headquarters.&#8221;

Before the approximately 25,000 Marines arrived in western Iraq earlier this year, rumors that some would stay longer than promised &#8212; until December instead of September &#8212; began circulating among the incoming units. The four-month extension of Army units in April helped fuel more speculation.

The comments by Hagee during a visit to the Rota Navy base seem to contradict a senior Pentagon official in a May 17 background briefing who talked about the possibility of an extension.

The official, who talked to journalists on the condition of anonymity, made the comments during a round-table discussion about the transfer of U.S. forces from South Korea to Iraq. A reporter asked whether the Pentagon was looking at keeping the Marines in Iraq beyond the seven months. The official said, &#8220;We are.&#8221;

&#8220;I think it is under evaluation on what the optimal tour lengths for everyone ought to be,&#8221; the official said, according to a transcript published on the Pentagon&#8217;s Web site www.defenselink.mil.

Hagee, who was in Rota visiting members of Marine Corps Security Force Company Europe, told Marines in the base theater that he would like units to spend more time at home between deployments. In the past, Marines usually deployed for six months, stayed home 18 months and then deployed again. &#8220;But that&#8217;s probably not going to happen in the near term,&#8221; he said.

Hagee also answered questions from the Marines and talked about more than a half-dozen topics. Among them:

&#182; The Marines are going to put more responsibility down to the squad level in what is being called &#8220;distributed operations.&#8221;

&#182; In the next year, the Navy and the Marine Corps will swap sailors and Marines aboard ships positioned around the globe rather than having crews and units deploy from the United States with the ship, in a program called &#8220;Sea Swap.&#8221;