No place like home (from Iraq) for the holidays 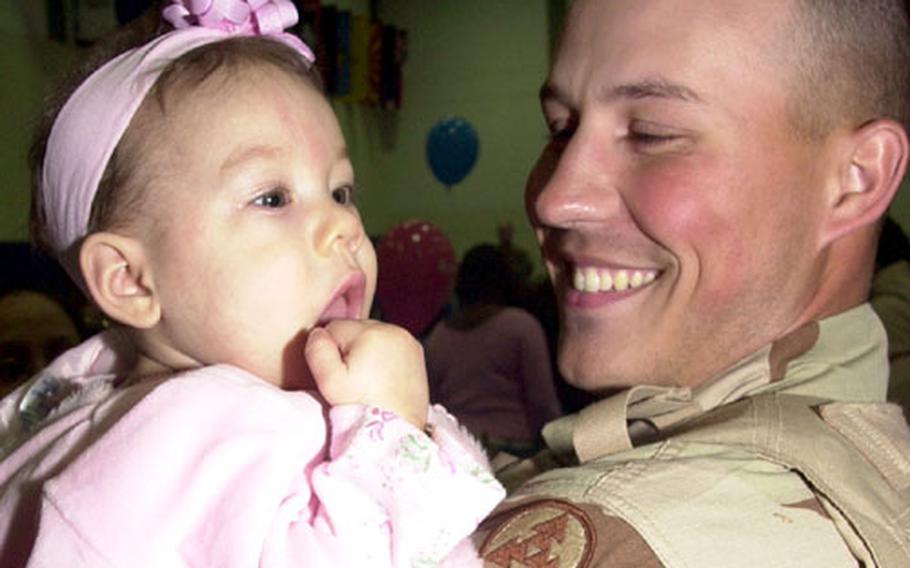 Spc. Ryan Upton, 24, of Clarksville, Tenn., reuites with his 7½-month-old daughter, Katalina, after his return to Grafenwöhr from a yearlong Iraq deployment. The 11th Transportation Company soldier said the only time he saw his daughter before Thursday was when he came home on midtour leave when she was three weeks old. (Seth Robson / S&S)

Spc. Ryan Upton, 24, of Clarksville, Tenn., reuites with his 7½-month-old daughter, Katalina, after his return to Grafenwöhr from a yearlong Iraq deployment. The 11th Transportation Company soldier said the only time he saw his daughter before Thursday was when he came home on midtour leave when she was three weeks old. (Seth Robson / S&S) 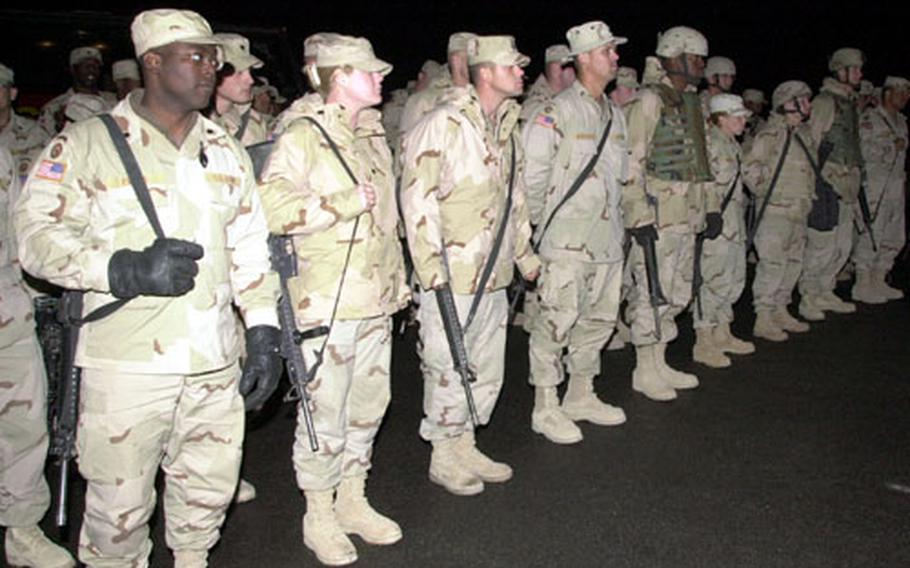 Soldiers from the 11th Transportation Company stand information after getting off buses at Grafenwöhr, Germany, Thursday morning. (Seth Robson / S&S) 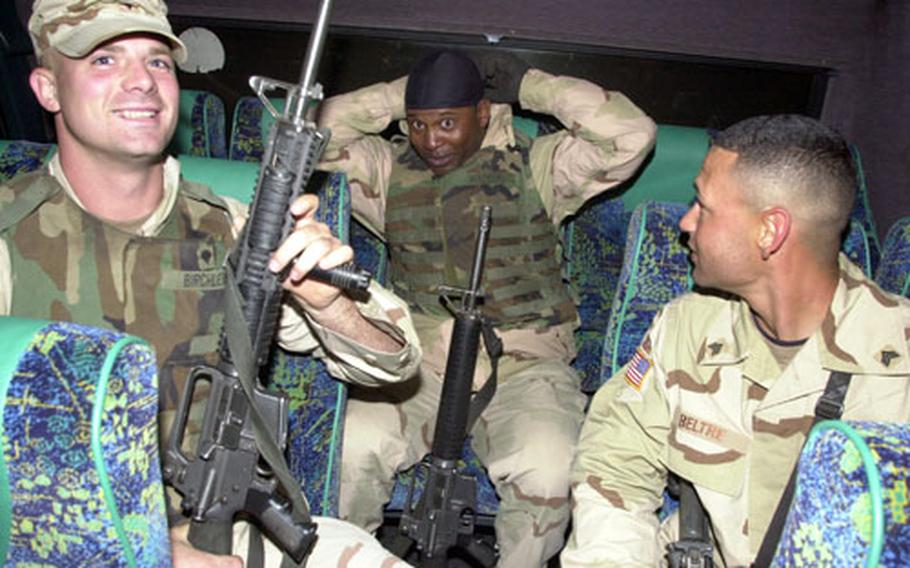 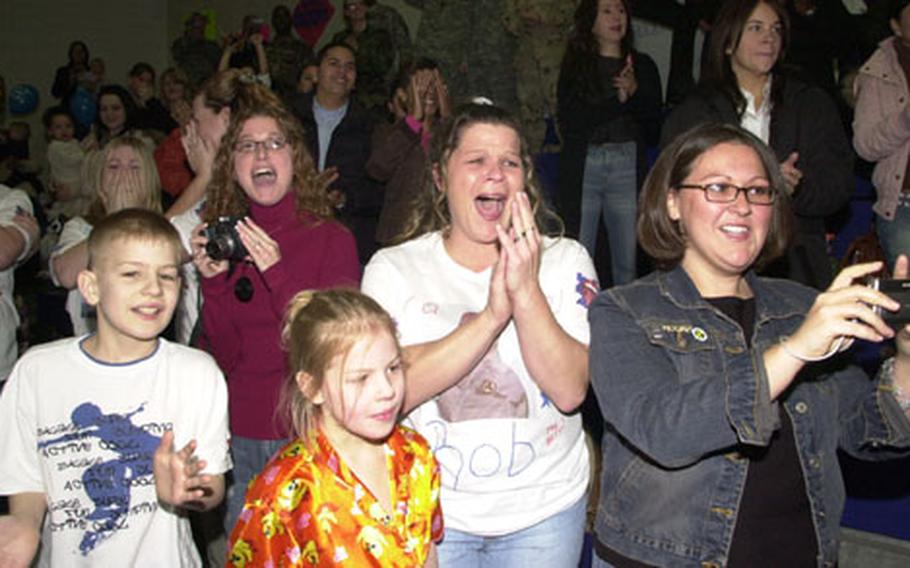 GRAFENW&#214;HR, Germany &#8212; Reunion with families and friends for Christmas is a dream for many servicemembers deployed to trouble spots such as Iraq and Afghanistan.

That dream came true for soldiers from the 11th Transportation Company. The Heavy Equipment Transportation unit, which deployed to Iraq on Jan. 10, returned to its home base at Grafenw&#246;hr on Thursday morning to a warm welcome.

&#8220;I called them pretty much every day and e-mailed just about as often, and occasionally we would Webcam,&#8221; said Cohen, who plans a quiet Christmas and New Year holiday with his family in Germany.

Did he get them any presents in Iraq?

&#8220;I brought them all gold rings and a digital camera for my wife that I got off post at an Iraqi shop. They are big into electronics over there,&#8221; Cohen said.

Charlene Johnson, 28, who welcomed home her husband, Sgt. Julio Johnson, 30, of Columbia, S.C., said it was hard work looking after the couple&#8217;s two sons, Keshawn, 8, and Kriovanni, 4, by herself this year.

The 11th had one of the most dangerous jobs in Iraq, moving tanks and armored vehicles about the battlefield, a mission that exposed its soldiers to the enemy on a daily basis.

Single soldiers from the 11th said they were looking forward to drinking German beer at off-post clubs after a year on the wagon.

Sgt. Jonathan Beltre, 22, of the Dominican Republic said the 11th, which previously deployed to Iraq from February 2003 to February 2004, was based at Taji this time, 17 miles north of Baghdad. The unit&#8217;s area of operations included the volatile Sunni Triangle, taking in Baghdad, Ramadi and Fallujah. Improvised explosive devices were a constant concern during frequent convoy missions, he said.

&#8220;Sometimes I got that feeling that something was going wrong. I was kind of leaning to the right to get away from the door. My truck got hit by an IED in Baghdad. It was an incendiary device and my truck was on fire for half a mile before it went out. The front of the truck was OK, but I looked out the window and saw fire streaming out the back. I didn&#8217;t want to stop,&#8221; he said.

Another 11th soldier, Sgt. Damon Walker, 27, of Picayune, Miss., said his most lasting memory was of a memorial for a soldier from the 11th&#8217;s sister unit, the 377th Transportation Company (HET), who was killed by a roadside bomb 18 days into the mission.

The 377th soldiers, who combined with the 11th for the Iraq mission, also returned Thursday to their home base at Mannheim, Germany, Walker said.